Humpback whales (Megaptera novaeangliae), popularly known for their majestic and alluring underwater mating songs and acrobatic breaches, have shown that they can adapt to changing prey variability by passing on new hunting techniques to each other.

According to new findings in the journal Science, a team of researchers have revealed the cultural spread of new hunting techniques through a population of humpback whales over the span of 27 years.

“Our study really shows how vital cultural transmission is in humpback populations – not only do they learn their famous songs from each other, they also learn feeding techniques that allow them to buffer the effects of changing ecology,” said lead author Luke Rendell of the Sea Mammal Research Unit and Center for Social Learning and Cognitive Evolution of St. Andrews University in a press release. 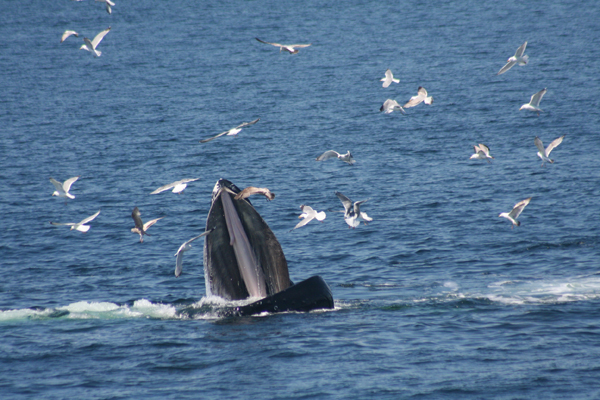 Humpback whales generally hunt by using a technique called bubble-feeding, a process where a whale dives beneath a school of fish then spirals upward while emitting bubbles to form a barrier through which the fish are incapable of passing. The whale then rushes into the concentrated area to feed. However, beginning in 1980 one whale in the Gulf of Maine was observed performing an innovative modification called Lobtail feeding, which, according to Rendell, consists of the whale striking the water’s surface one to four times with the ventral side of the fluke, followed by a bubble-feeding sequence.

The data set, which was compiled and collated by Jenny Allen and Will Hoppitt of the Whale Center of New England and from groups on commercial whale-watching vessels between the years 1980-2007, shows the population using lobtail feeding has increased by nearly 40 percent. 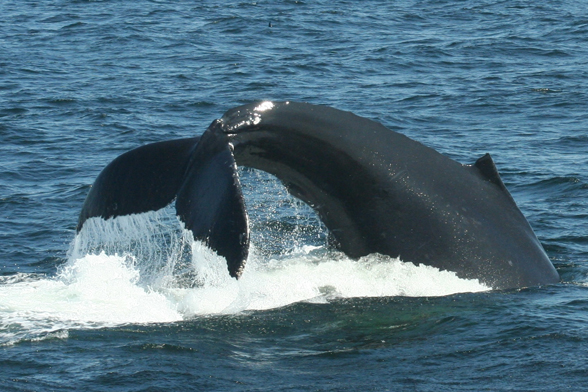 The behavior changes are likely due to shifting herring and sand lance populations, both significant prey choices for the humpback whale. For example, immediately preceding the behavior’s emergence herring populations plummeted. In addition, the first observations of lobtail feeding were associated with a peak in sand lance abundance followed by a subsequent rise in the use of the technique as it was passed along by various whales.

“We think this is one of the major advantages of social learning in that it allows individuals to adapt flexibly and efficiently to new ecological conditions and opportunities,” Rendell said in a statement. “Innovation happens relatively rarely, so being able to pick up quickly on another’s innovation is a major advantage.”

The study further proves that the social world of the humpback whale is highly complex and comprised of an intricate web of social networks and interactions where shared behavior is propagated by social learning.

“This seems to be a critical component in the way they adapt to changing prey availability; it probably explains how this species has become so successful and widely distributed,” Rendell added.

(07/12/2011) The humpback whale (Megaptera novaeangliae) is a conservation success story. Decimated by centuries of whaling, most populations have risen since a moratorium was placed on commercial whaling in the 1966. Today, over 60,000 humpback whales migrate through the world’s oceans, though this is still considerably less than the historic population.