Glaciers in the Mount Everest region have shrunk by 13 percent and the snow-line has shifted 180 meters (590 feet) higher during the past 50 years, according to a study that will be presented this week at a conference organized by the American Geophysical Union.

The research, led by Sudeep Thakuri of the University of Milan, is based on satellite imagery and topographic maps. Thakuri and colleagues reconstructed the glacial history of the region and concluded that ice retreat on Everest and the neighboring Sagarmatha National Park is accelerating due to warming temperatures (a 0.6 degree Celsius rise) and declining snowfall (a 100 millimeter decrease) since the early 1990s. Glaciers have retreated by an average of 400 meters since 1962 while glaciers smaller than one square kilometer have experienced a 43 percent decrease in surface area, according to the researchers, who speculate that rising carbon dioxide levels are driving the changes, but haven’t established a direct connection to date. 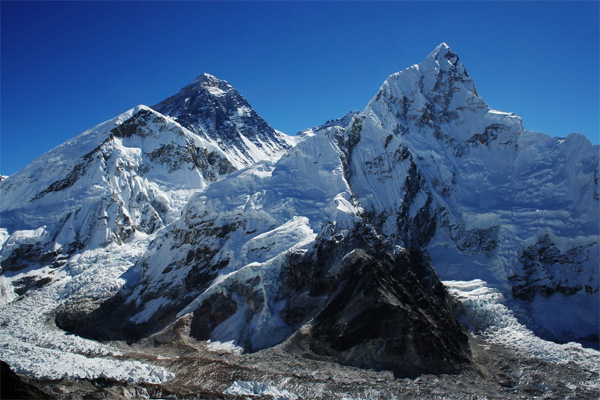 A new study finds a decline in snow and ice on Mount Everest (second peak from left) and the national park surrounding it. Credit: Pavel Novak

The shift has important implications for human populations in the region, accord to Thakuri.

“The Himalayan glaciers and ice caps are considered a water tower for Asia since they store and supply water downstream during the dry season,” said Thakuri. “Downstream populations are dependent on the melt water for agriculture, drinking, and power production.”