In the last four years, invading land speculators and peasants have destroyed 150,000 hectares (370,000 acres) of rainforest in Nicaragua’s Bosawás Biosphere Reserve, according to the Mayangna and Miskito indigenous peoples who call this forest home. Although Nicaragua recognized the land rights of the indigenous people in 2007, the tribes say the government has not done near-enough to keep illegal settlers out despite recent eviction efforts. The largest remaining forest in Central America, Bosawás Biosphere Reserve covers around 7 percent of Nicaragua’s land area and is home to several imperiled species including Baird’s tapir (Tapirus bairdii) and Geoffroy’s spider monkey (Ateles geoffroyi), both listed as Endangered by the IUCN Red List.

The indigenous tribes say that 11,500 colonists have entered the reserve, including land speculators, former contra militia members, and landless peasants. Forests are being cut and burned largely to produce beef and dairy on new pasturelands.

Taymond Robins, a technical adviser to the Mayangna nation told Reuters that the invasions were turning parts of the reserve into “a sort of Wild West.”

Underscoring this, late last month a Mayangna community leader was shot dead when an indigenous scouting party found illegal settlers clearing forest. This weekend, two illegal loggers were found dead; officials believed they were executed by the timber mafia for failing to meet their logging agreement.

Such conflicts are exacerbated by the fact that the colonists are invading land willingly set aside by the indigenous groups for conservation purposes.

“Even we the Mayangna don’t touch these forests, that’s where the animals we hunt reproduce. If they destroy that, they will destroy our people,” the president of Nacio Mayangna, Arisio Genaro, told the BBC.

The government has attempted to evict illegal settlers in the region twice: first in 2001 and again in 2010. However, the colonists have simply returned to the reserve after forced, and sometimes, violent evictions. Peasants have called for land reform, but the land in question is already held by indigenous groups.

Yesterday, government officials, the military, and the police agreed that a new attempt at eviction was required, as reported by the El Nuevo Diario. In addition, they noted they would proceed with legal action against anyone involved in land deals in Bosawás Biosphere Reserve.

Bosawás Biosphere Reserve covers around 1.8 million hectares (4.4 million acres) on the border of Nicaragua and Honduras. It is believed to be home to some of the largest populations of jaguars, giant anteaters, pumas, Harpy eagles, and tapirs in Central America. Researchers estimate that the park is home to some 150,000 insect species and 600 species of birds. 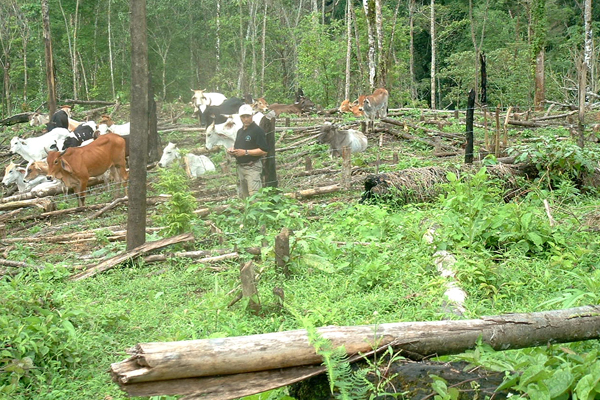 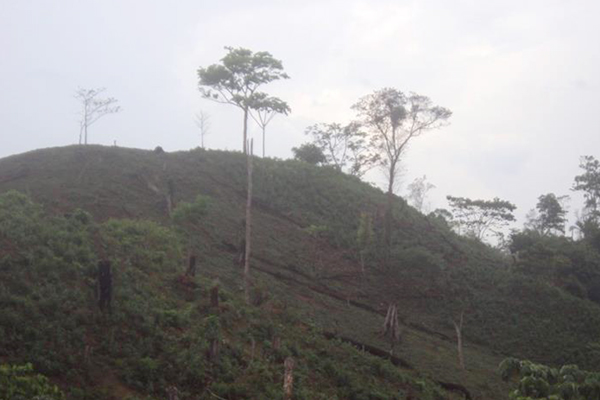 (02/11/2013) In Belize, the uncontrolled and often illegal harvesting of rosewood has been, and still is, one of the major environmental issues in the country. In March of last year, the government established a moratorium on the export and extraction of rosewood, however illegal harvesting continued. On Friday 11 January, the Minister of Forestry, Fisheries and Sustainable Development made the bold move of burning confiscated illegally cut rosewood flitches.

Amphibian, tapir paradise in Honduras being ravaged by illegal deforestation

(02/06/2013) Located in a mountainous area near the border with Guatemala, Cusuco National Park in Honduras is recognized by researchers as a critical refuge for endangered amphibians in a country that has suffered from widespread deforestation. But while the park largely escaped the devastation that has affected other protected areas in Honduras, the situation seems to be changing: since 2010 there has been a sharp increase in deforestation. Poachers, small farmers, and cattle ranchers are moving into the park using a network of research trails and camps established by Operation Wallacea, a British conservation science NGO.

(11/20/2012) The Belizean government has approved an application by US Capital Energy to drill exploratory wells for oil in the Sarstoon Temash National Park in southern Belize. The decision is believed to have been taken on November 1st by the National Environmental Assessment Committee (NEAC) of the Department of Environment, but the exact terms of the settlement have not yet been made public. The oil company, backed by US energy investment group Aspect Holdings, has applied to drill at five points in the Sarstoon Temash National Park and adjacent areas.

(10/22/2012) On hot days the broken stone and dried up silt from the San Sebastian mine in Eastern El Salvador bake in the sun. The slew of refuse is freckled with rock stained bright blue with cyanide, open to the elements that on rainier days will wash it downhill into the Rio San Sebastian below. The openings of passages into the mine dot the mountainside, and further downhill a bright orange stream with a chemical stench flows into another. The American Commerce Group ceased operating here in 1999 but sought to return when the price of gold began its current escalation.