The Amazon River’s hydrological cycle has become more extreme over the past two decades with increasing seasonal precipitation across much of the basin despite drier conditions in the southern parts of Earth’s largest rainforest, finds a new study published in Geophysical Research Letters.

The research, led by Emanuel Gloor of the University of Leeds, analyzed monthly Amazon River discharge at Óbidos, a point that drains 77 percent of the Amazon Basin, and compared it with regional precipitation patterns. Suspecting that temperatures in the tropical Atlantic might be influencing rainfall — as has been suggested in other studies — the authors also assessed sea surface temperature data from the National Oceanic and Atmospheric Administration (NOAA).

The researchers found a significant intensification in the Amazon’s hydrological cycle, with increased discharge during the rainy season punctuated by occasional episodes of severe drought.

“The catchment of the world’s largest river is experiencing a substantial wetting trend since approximately 1990,” the authors write. “This intensification of the hydrological cycle is concentrated overwhelmingly in the wet season driving progressively greater differences in Amazon peak and minimum flows.” 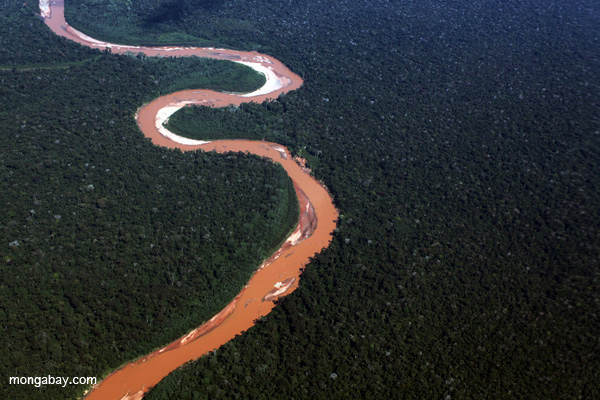 A tributary of the Amazon River in Peru. Photo by Rhett A. Butler

In other words, the wet season is getting wetter across much of the Amazon. But how does that square with the apparent increased incidence of severe drought — including the two worst on record in 2005 and 2010 — in the region? The authors say the answer may lie in the complex relationship between Atlantic sea temperatures and rainfall in the Amazon.

When Atlantic sea surface temperatures spike, the effect in the Amazon is a drop in rainfall, as was the case in 2005 and 2010. This “anti-correlation” may be linked to temporary shifts in the position of the Inter-tropical-Convergence-Zone (ITCZ), which normally delivers moisture the region. When the ITCZ shifts northward into the Caribbean, much of the Amazon — especially the southern fringe — is left parched. Meanwhile the increased moisture in the Caribbean creates enabling conditions for stronger Atlantic hurricanes. El Niño Southern Oscillation (ENSO) and La Niña events can also affect rainfall in the Basin: El Niño tends of depress rainfall, La Niña increases it. 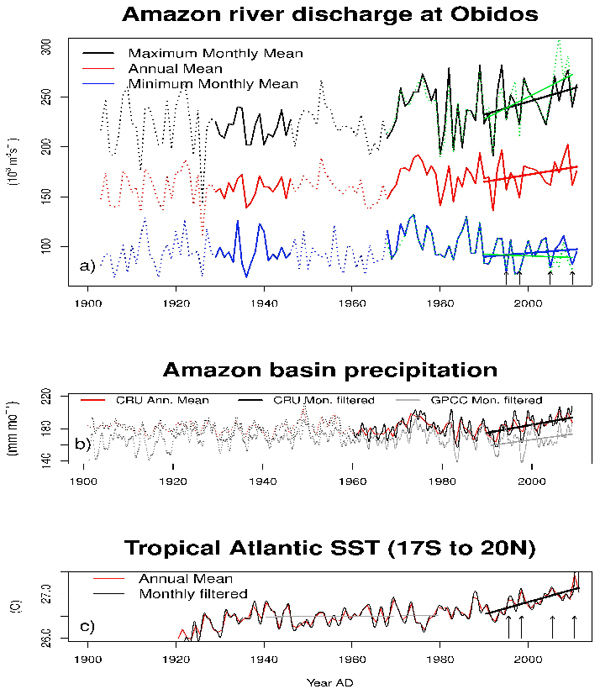 However Gloor and colleagues put these short-term influences aside and focus on the broader trend of rising ocean temperatures, which increase the rate of evaporation.

“The onset of the trend coincides with the onset of an upward trend in tropical Atlantic sea surface temperatures (SST),” they write. “This positive longer-term correlation contrasts with the short-term, negative response of basin-wide precipitation to positive anomalies in tropical North Atlantic SST, which are driven by temporary shifts in the Inter-tropical-Convergence-Zone (ITCZ) position. We propose that the Amazon precipitation changes since 1990 are instead related to increasing atmospheric water vapor import from the warming tropical Atlantic.”

“The coincidence of the onset of the trends suggests that the intensification of the hydrological cycle might simply be due to the increase of water vapor input by the airstream entering the basin from the tropical Atlantic and feeding the Amazon hydrological cycle.”

The findings are significant because they suggest that the world’s largest river is becoming less predictable. More severe flood and drought cycles will have implications for transportation, hydroelectric projects, and urban infrastructure. In a biome that is already experiencing rapid change due to deforestation, dam construction, and overfishing, an intensified hydrological cycle could also have substantial impacts on ecological processes like fish migration, nutrient cycling and seed dispersal,

Dams in the Amazon. Courtesy of InfoAmazonia.

Geology has split the Amazon into two distinct forests

(01/19/2012) The common view of the Amazon is that it is one massive, unbroken forest. This impression is given by maps which tend to mark the Amazon by a large glob of green or even by its single name which doesn’t account for regional changes. Of course, scientists have long recognized different ecosystems in the Amazon, most especially related to climate. But a new study in the Journal of Biogeography has uncovered two distinct forest ecosystems, sharply divided, caused by million of years of geologic forces.

Secrets of the Amazon: giant anacondas and floating forests, an interview with Paul Rosolie

(03/10/2010) At twenty-two Paul Rosolie has seen more adventure than many of us will in our lifetime. First visiting the Amazon at eighteen, Rosolie has explored strange jungle ecosystems, caught anaconda and black caiman bare-handed, joined indigenous hunting expeditions, led volunteer expeditions, and hand-raised a baby giant anteater. “Rainforests were my childhood obsession,” Rosolie told Mongabay.com. “For as long as I can remember, going to the Amazon had been my dream […] In those first ten minutes [of visiting], cowering under the bellowing calls of howler monkeys, I saw trails of leaf cutter ants under impossibly large, vine-tangled trees; a flock of scarlet macaws crossed the sky like a brilliant flying rainbow. I saw a place where nature was in its full; it is the most amazing place on earth.”

(07/22/2009) Photos released by NASA highlight last month’s severe flooding of the Amazon River near the Brazilian city of Manaus.

(02/05/2008) Overfishing is reducing the effectiveness of seed dispersal by fish in the Brazilian Pantanal, reports Nature. The research suggests that fishing practices can affect forest health.

Amazon river flowed into the Pacific millions of years ago

(10/24/2006) A new study adds further evidence the theory that the world’s largest river, the Amazon, once flowed in the opposite direction, emptying into the Pacific Ocean. Researchers at the University of North Carolina at Chapel Hill (UNC) discovered “ancient mineral grains” in the central Amazon that could only have originated in now-eroded mountains that once existed in the central and eastern South America, not the more recently formed Andes in the west

(12/11/2005) The worst drought ever recorded in the Amazon continues according to an update from The New York Times. The drought has turned rivers into grassy mud flats, killed tens of millions of fish, stranded hundreds of communities, and brought disease and economic despair to the region.

(10/11/2005) The Amazon River in Peru and parts of Brazil is at its lowest level in 30 years of record keeping. While variable water levels are characteristic of the Amazon river ecosystem, the increasingly extreme fluctuations are of great concern. Low water levels are wreaking havoc on the shipping industry in the region. In Iquitos, a city in the heart of the Peruvian Amazon which is only accessible by plane or boat, ships and barges are having difficulty navigating the river, resulting in serious shipping delays. Local officials in Peru are blaming deforestation of the upper reaches of the Amazon in the Andes for the fall in river levels, although it is likely that larger forces are at least equally important. Warmer ocean surface temperatures in the Pacific and low sunspot activity is also affecting weather in the region, while warming in the north Atlantic — which has helped trigger an unusually strong and destructive hurricane season — may be preventing the formation of rain clouds over the Amazon Basin.