Popularization of the world’s strangest coffee may be imperiling a a suite of small mammals in Indonesia, according to a new study in Small Carnivore Conservation. The coffee, known as kopi luwak (kopi for coffee and luwak for the civet), is made from whole coffee beans that have passed through the guts of the animal and out the other side. The coffee is apparently noted for its distinct taste, though some have argued it is little more than novelty.

“Originally, the dung-covered beans were collected in coffee plantations but more recently, as more people wanted to drink coffee made from beans that had passed through the intestines of this small carnivore, entrepreneurs have begun sticking civets in cages, feeding them coffee beans and recollecting them from the dung for wholesale,” the paper’s author, Chris Shepherd the deputy regional director with anti-wildlife crime NGO TRAFFIC, told mongabay.com. “Reportedly, as demand rose, other civet species were captured and added to these captive civet coffee makers.”

Now, this burgeoning kopi luwak industry is creating “civet farms,” whereby civets are stolen from the wild and kept in cages to eat and expel coffee beans.

In 2010 and 2012, Shepherd visited several markets in Jakarta. He documented vendors selling 30 civets in three species: small Indian civet
(Viverricula indica), common palm civet (Paradoxurus hermaphroditus), and the small-toothed palm civet (Arctogalidia trivirgata). While none of these species are currently considered threatened yet by the IUCN Red List, Shepherd says the trade, which is completely unregulated, is likely hurting populations.

“While no research on populations are being carried out to measure the impact of this trade, it is sure to have a detrimental impact,” he says, “some species of civets are already threatened by habitat loss, hunting etc, and this is just one more pressure.”

The binturong (Arctictis binturong), a close relative of the civets which has also been used to make the coffee, is currently listed as Vulnerable.

In addition, the trade is seen by many as cruel and inhuman, with animals living out their lives in cramped cages and fed poorly. Shepherd writes that laws need to be updated in Indonesia to better-monitor and regulate the civet coffee trade. In addition, improved law enforcement is needed at these markets where many endangered species are sold illegally.

“To me, this is the most ridiculous threat to civets, or to any wildlife, I have seen yet,” says Shepherd, who has spent many years working to stop illegal wildlife trafficking. ” Do people drinking this coffee know what a civet is? Do they know that animals are being taken from the wild for their cup of coffee? And do they know that the beans ground to make their coffee have been eaten and crapped out by a smelly, furry little animal?” 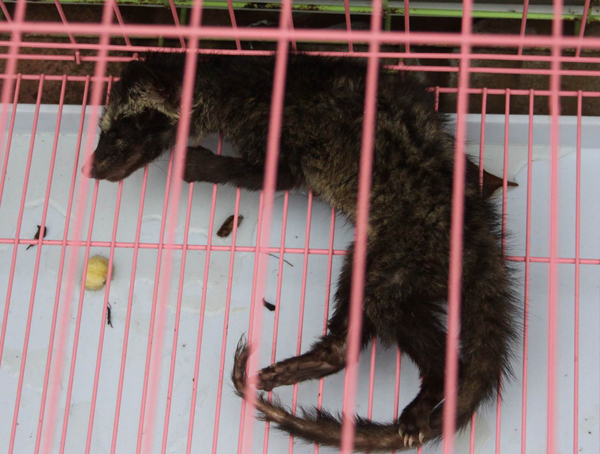 Civet being sold in Jakarta market for the civet coffee trade. Photo by: Chris Shepherd. 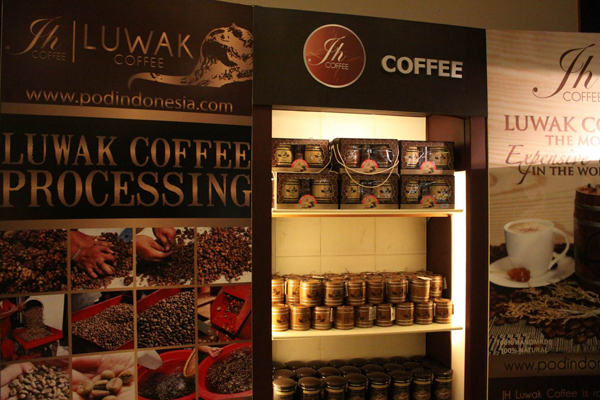 (04/12/2013) Millions of tokay geckos continue to be traded for traditional medicine, despite waning belief that the colorful lizards are a cure for AIDS, reports a new study from TRAFFIC.

(04/03/2013) Early on a Sunday morning last summer, the villagers of Epulu awoke to the sounds of shots and screaming. In the eastern reaches of the Democratic Republic of the Congo, that can often mean another round of violence and ethnic murder is under way. In this case, however, something even more horrific was afoot.

(03/25/2013) On Friday, March 15th Thai authorities arrested a 38-year-old man attempting to collect a bag containing 54 ploughshare tortoises (Astrochelys yniphora) and 21 radiated tortoises (Astrochelys radiata) in Suvarnabhumi International Airport. Found only in Madagascar both species are listed as Critically Endangered and protected under the Convention on International Trade in Endangered Species (CITES), but have become lucrative targets for the black-market pet trade given their scarcity and beauty.