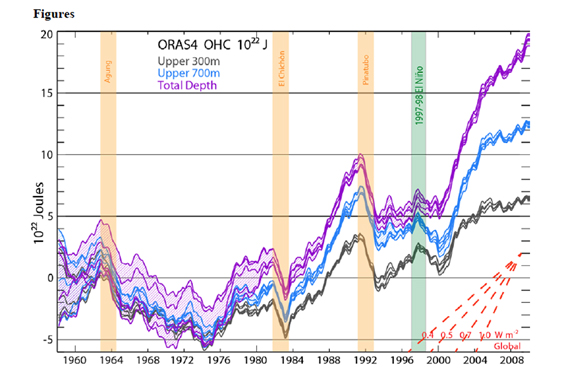 Critics of climate change often claim that warming has stopped since the late 1990s. While this is categorically false (the last decade was the warmest on record and 2005 and 2010 are generally considered tied for the warmest year), scientists do admit that warming hasn’t occurred over land as rapidly as predicted in the last ten years, especially given continually rising greenhouse gas emissions. But a recent study in Geophysical Research Letters has found this so-called missing heat: 700 meters below the surface of the ocean.

“Increasingly in the past decade, more of that heat has been dumped at levels below 700 meters, where most previous analyses stop. About 30 percent has gone below 700 meters in depth,” explains co-author Kevin Trenberth with the U.S. National Center for Atmospheric Research. “This is fairly new, it is not there throughout the record.”

Scientists have long known that around 90 percent of the heat from climate change ends up in the oceans and they suspected that this was where the ‘missing heat’ would be found. The study find that climate change has revved up worldwide, instead of stopping.

“This signals the beginning of the most sustained warming trend in this record of [ocean heat content],” the scientists write in the paper. “Indeed, recent warming rates of the waters below 700 meters appear to be unprecedented.”

But the fact that so much heat is ending up in the deep ocean has surprised scientists, since warm waters should rise to the surface.

“The cause of the change is a particular change in winds, especially in the Pacific Ocean where the subtropical trade winds have become noticeably stronger, thereby increasing the subtropical overturning in the ocean and providing a mechanism for heat to be carried down into the ocean,” says Trenberth.

In other words, over the last decade potent trade winds have stirred up the oceans, pushing a significant amount of heat to lower depths than expected. Trenberth says that some of heat is probably “reversible,” meaning it will rise to the surface at some point, perhaps during the next El Niño event, when the Pacific ocean warms considerably.

“However, one suspects that a lot is not [reversible]: instead it contributes to the overall warming of the deep ocean that has to occur for the climate system to equilibrate,” he goes on to say. “It speeds that process up faster than assumed almost everywhere in climate research, and it invalidates simple energy balance climate models.”

But warming at deep sea levels doesn’t mean humanity avoids some of the impacts of climate change. Rising temperatures in the oceans are disrupting marine ecosystems as well as contributing to sea level rise, since warmer waters physically expand. As Trenberth says, “[this] means less short term warming at the surface but at the expense of a greater earlier long-term warming, and faster sea level rise. So this has consequences.”

Trenberth, along with Magdalena Balmaseda and Erland Källén with the European Centre for Medium Range Weather Forecasts, discovered the missing heat with the help of the Argo observation program. Argo is a global array of thousands of floating devices that measure temperatures across the oceans.

In the end, Trenberth says, “global warming has not gone away,” instead the heat-energy from rising greenhouse gases emissions is simply hiding where its difficult to observe, but not to feel, as residents of low-lying islanders and coastal regions—increasingly swamped by higher tides and storms—will tell you.

(03/13/2013) This week, Admiral Samuel J. Locklear II, the head of U.S. military forces in the Pacific, told The Boston Globe that climate change was the gravest threat in the region. While such an assessment may be surprising, given North Korea’s recent nuclear tests, the U.S. military has long viewed climate change as a massive destabilizing force on global security.

(03/08/2013) An increasing number of Americans believe there is evidence for climate change, reveals a new poll conducted by researchers at the University of Michigan.

(03/06/2013) Carbon dioxide now makes up around 395 parts per million in the atmosphere, according to new data from the National Oceanic Atmospheric Administration (NOAA). Measuring atmospheric carbon in Mauna Loa, Hawaii, the NOAA notes that last year saw a jump of 2.67 parts per million, second only to a record jump in carbon concentrations in 1998—2.93 parts per million. The news further dampens hopes that nations will stick to their goal of keeping global temperatures from rising more than 2 degrees Celsius (3.6 degrees Fahrenheit) above pre-industrial levels.

(03/02/2013) The tiny territory of Tokelau is today leading a call by 14 Pacific island nations for the world to take action to stop climate change.