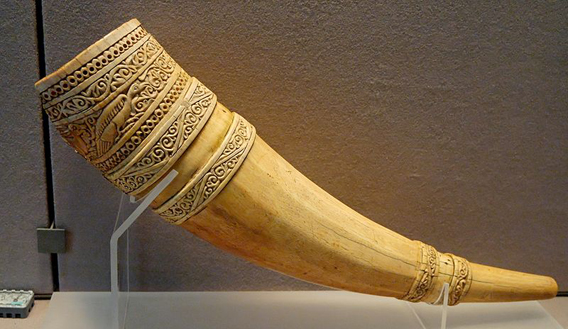 Eleventh century horn made of ivory in Louvre. Today ivory is often used to make religious items for Catholics and Buddhists, among other decorative luxury-goods. To get ivory, poachers shoot elephants and then cut off their tusks, sometimes with chainsaws and sometimes while still alive.

Conservationists couldn’t agree if the glass was half-full or half-empty on action to protect elephants at the Convention on International Trade in Endangered Species (CITES) in Bangkok, Thailand. Elephants, especially in Africa, have faced a massive rise in poaching over the last decade with tens-of-thousands shot dead every year. Forests elephants in central Africa have been especially targeted: new research estimates that an astounding 60 percent of the world’s forest elephants have been slaughtered for their tusks in the last ten years alone. While conservationists had hopes that CITES would move aggressively against elephant poaching, the results were a decidedly mixed-bag.

The international organization refrained from using its toughest tool against any of the nations complicit in the illegal ivory trade, namely sanctions against problematic nations from trading any of the 35,000 species under CITES. Instead, CITES declared that China, Thailand, Vietnam, Philippines, Malaysia, Kenya, Tanzania, and Uganda must submit detailed plans to stop the ivory trade in two months and must make progress by the summer of 2014.

“After years of inaction, governments today put those countries failing to regulate the ivory trade on watch, a move that will help stem the unfettered slaughter of thousands of African elephants,” Carlos Drews, the head of WWF’s at CITES said. “The gains made to better protect species here in Bangkok are a major milestone.”

But the grouping of these nations together includes both demand countries (those in Asia) and source countries (those in Africa), which unsurprisingly upset some African nations according to the BBC. Notably, as well, the list leaves out nations in central Africa where the heaviest poaching is occurring, including Gabon, Cameroon, Republic of the Congo, and the Democratic Republic of Congo (DRC).

“CITES is sticking band-aids on with one hand and fueling poaching with the other. Its failure to combat the fundamental driver of the killing amounts to gross international negligence,” said Rosalind Reeve with the David Shepherd Wildlife Foundation, one of the coalition organizations. “Elephants are the symbol of CITES. They are the heart of the convention. But that heart is dying a slow and painful death.”

The groups say CITES has sent contradictory messages on elephants by allowing one-off sales of ivory in the past that only fueled demand and spread confusion about the legality of ivory in general.

“Any further discussion of legalizing ivory trade is a recipe for extinction,” says Charlotte Nithart, the Director of the NGO Robin des Bois.

In addition, the groups say China, where much of the illegal ivory ends up, has done nothing to stop the elephant slaughter.

“Evidence is irrefutable that China bears the main responsibility for the elephant poaching crisis yet it continues to hide behind a facade of denial,” says Steve Itela, Director of Youth for Conservation. “China could end the killing by immediately closing its domestic ivory markets and severely punishing citizens engaged in illegal ivory trade. But it chooses ivory trinkets for a luxury market over live elephants.”

One of the bright spots for elephants came during the first day of the meeting when Prime Minister Yingluck Shinawatra pledged to end the legal ivory trade in Thailand. Currently ivory is sold domestically in the country where, experts say, it is most often bought by foreign tourists. Her declaration came after the delivery of petition signed by nearly 1.5 million people. The meeting also agreed to make forensic testing of confiscated ivory compulsory if it weighs over 500 grams. In addition, there was an agreement on the need for demand reduction strategies of ivory.

But the seriousness of CITES will likely be tested over the next year on how it responds to problematic nations’ efforts.

“We will be watching to see that CITES holds these governments to account in the coming year,” said Drews with WWF.

A lifetime with elephants: an interview with Iain Douglas-Hamilton

(02/22/2013) Iain Douglas-Hamilton has dedicated his life to elephants. ‘I like elephants because of the way they treat each other,’ he says. ‘They’re very nice to each other most of the time, but not all the time … You see a lot of play…a lot of tender touching, caressing, tactile contact of one sort or another.’ The affection goes both ways. Douglas-Hamilton recalls one curious female who would always approach his vehicle. ‘Eventually I got so friendly with her that…I could walk with her and feed her the fruits of the wild gardenia tree. That was a very special elephant for me. She eventually brought her babies up to meet me.’ Douglas-Hamilton’s dedication extends to protecting the species from harm, and especially the ivory trade. He calls the current ivory trade “totally unsustainable” and recommends a total ban on the trade.