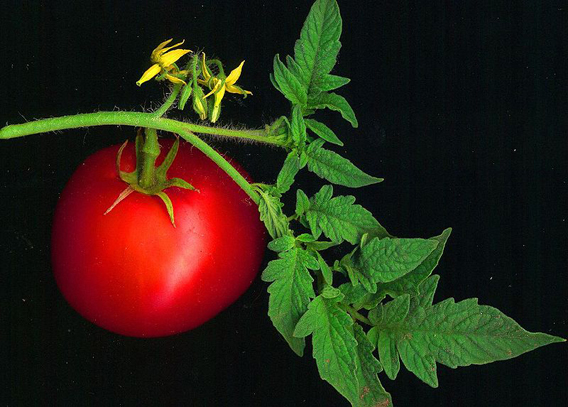 Tomato on the vine. Photo by: David Besa.

Organic tomatoes are sweeter (more sugar) and more nutritious (more vitamin C and anti-oxidants) than tomatoes grown with pesticides and chemical fertilizers, according to a new study published in the open-access journal PLOS ONE. The scientists theorize that stress may be why organic farming produces a more nutritious and tastier tomato.

The scientists write that they believe “stressing conditions” in organic farming creates a more potent tomato, both in terms of nutrition and taste. According to the scientists, moderate stress in organic farming, due to lower mineral availability, causes tomatoes to undergo oxidative stress, triggering the fruit to generate more nutritious molecules.

“Indeed, several studies have demonstrated that fruits and vegetables from organic farming generally are endowed with enhanced nutritional properties,” the researchers write.

But while tomatoes grown organically are “substantially better quality” than conventional farming, the study also found that organic tomatoes were on average 40 percent smaller. The debate over organic and conventional farming has often hinged on whether organic farming is capable of feeding our current global population of 7 billion and rising. Proponents of conventional farming point to lower yields in organic farming with some crops, while those for organic agriculture argue that the yield gap is actually non-existent in the longterm due to more environmentally-friendly practices and wiser use of natural resources.

“Until recently, the focus has been mainly on yield rather than on gustative [i.e. taste] and micronutritional quality of fresh plant products,” the researchers write. “This might be all right for staple food, but, as far as fruits and vegetables are concerned, it may be argued that gustative and micronutritional quality matter more than energy supply.”

They recommend that farmers should not work to eliminate stress from the tomatoes, but instead “accept a certain level of stress” to boost nutrition and taste.