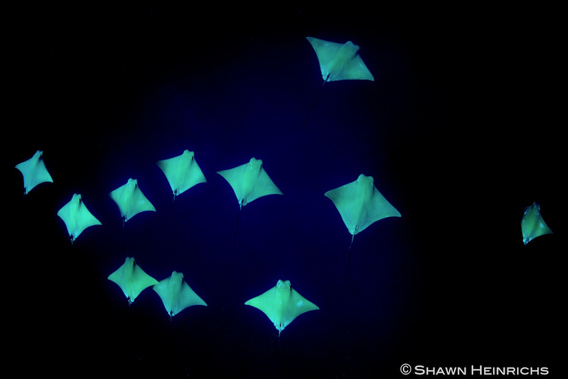 Tens of millions of sharks and rays are killed each year to meet demand for shark fin, a delicacy across East Asia. But while the plight of sharks has gained prominence in international environmental circles in recent years, the decline in rays has received considerably less attention. A new film, Manta Ray of Hope, aims to change that.

Produced by cinematographer, scuba diver, and marine conservationist Shawn Heinrichs, Manta Ray of Hope offers a look at the mysterious and magnificent world of the world’s largest ray, the manta ray. The film highlights both the threats mantas face as well as some of the people who are working to save them.

Manta Ray of Hope is making its New York City premiere Friday, February 1 at the 3rd Annual New York Wildlife Conservation Film Festival. Ahead of its premiere, Heinrichs answered some questions from Mongabay.com about the film and his career, which includes work with CNN’s Anderson Cooper, Yann Arthus Bertrand, National Geographic, and top marine conservation organizations like WildAid, Shark Savers, Conservation International, The Nature Conservancy and Pew Environment Group. His efforts to highlight threats to rays — and sharks — were recognized with the 2011 Oris Sea Hero of the Year award.

AN INTERVIEW WITH SHAWN HEINRICHS

Shawn Heinrichs: I was born in Durban South Africa and from a very young age, I have shown a passion for adventure and nature. As a child I traveled with is father to remote villages in southern Africa, explored South Africa’s Drakenberg Mountains and the Wild Coast, and spent countless hours playing on the beaches. My childhood passion for the oceans ultimately led me to become a cinematographer, scuba diver, and marine conservationist.

Shawn Heinrichs: I started making short films recreationally over a decade ago. What began as a hobby transformed into a all consuming passion and full time career (Blue Sphere Media). My film work focuses on ocean marine life and how human interact with and connect with these creatures. My works has been included in major National Geographic production, domestic and international broadcast features, dozens of environmental short films and PSAs, news and media outlets.

Mongabay.com: Why did you choose manta rays as a subject?

Shawn Heinrichs: While conducting a decade long investigation into the global shark fin trade, we began to notice another heart-wrenching trend in fish markets around the world – manta and mobula rays being sold for their meat and gill-rakers. In fact, in just one small fishing port in Indonesia, we documented up to a dozen mantas and mobulas lined up in the street. Repeat visits to this market revealed the same grizzly scene, time and time again. Similarly, in a fishing port in Sri Lanka, we counted 23 dead mobula rays in one morning, and according to the fishermen, mobula rays were landed here every day. We had never seen so many mobula rays in one place – either dead or alive. Further investigation led us to the traders where we discovered a row of sacks, each containing gill-rakers from about 100 manta and mobula rays. On the roof, we were shown the gill-rakers from a recent catch of hundreds of mobulas being dried prior to export. We also learned that often manta and mobula cartilage is used as filler in shark fin soup.

We had to know what was driving fishermen to target mantas and mobulas. Our research and discussions with marine scientists and traders revealed that the gill-rakers were increasingly being used in Chinese medicine as a health tonic, driven by a belief that gill-rakers cool the blood. Demand for gill rakers now reached across oceans, giving rise to unsustainable manta ray fisheries off the coasts of Mexico and the Philippines. As these manta populations tumbled, the governments of Mexico and the Philippines that had once made it illegal to capture and kill mantas, in the face of fisheries pressure, lifted the bans.

Through our research, we truly believe that demand for manta and mobula gill-rakers is rapidly approaching a critical inflection point. Whereas the shark fin trade has sadly become deeply entrenched, both culturally and economically, there maybe time to intercept and head-off the gill-raker trade before it becomes completely entrenched. With this realization, we have set out to tell this story in the hopes of driving real change before it is too late.

Shawn Heinrichs: “Manta Ray of Hope” takes the viewer on a breathtaking journey to some of the most remote and exotic places on earth, to personally experience the magnificence of these rays. Through the eyes of naturalists and researchers, the people who know these animals best, we begin to unravel the mysteries of the manta. We experience their joy of new discoveries and also their pain, watching mantas they know fished in front of their very eyes. We then go deep undercover, from the remote fishing villages to the bustling cities, to better understand and expose the trade that is threatening their very future. And, we challenge the medicinal health ‘claims’ that are driving this destructive trade. Finally, as a ray of hope, we meet those who are making a difference, from scientists, to politicians, to local businessmen, and learn how we all can make a difference for these magical creatures too. 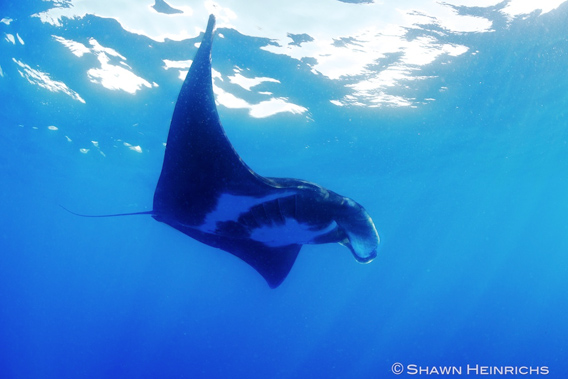 Shawn Heinrichs: The most memorable moments were also the hardest moments. Witnessing the manta and mobula rays dragged ashore, line up in mass and chopped up by machete are images that will never leave our minds. Our hope is that these images will become a thing of the past.

Shawn Heinrichs: In partnership with WildAid and the Shark Savers, we are creating a documentary connected directly to ‘demand-side’ awareness and educational campaigns. This film is geared for audiences around the world – for everyone truly can make impact the future of mantas and mobulas. And there are clear ways both western and eastern consumers can get involved. Ultimately the future of manta and mobula populations rests in the hands of consumers.

Globally, mantas attract over 100 million dollars in eco-tourism and are among the top experiences divers are seeking. Eco-tourism can generate the income and foster the attention necessary to increase public awareness of the plight of mantas and influence governments to protect them. For example, mantas contribute an estimated USD$8.1 million to the Maldives and USD $2.5 million to Hawaii annually through manta ray eco-tourism. And in both areas, mantas are protected.

And if there is no consumer demand for manta and mobula products, there will be no more fishing of these rays. Through education and awareness, we also hope to limit demand for gill-rakers, and increase consumer intelligence about the use of manta and ray byproducts (meat, cartilage, skin). If we can help consumers make connection between the gill-rakers and these amazing creatures; if they understand the global impact gill-raker consumption is having on manta and mobula populations; and if they decide enough-is-enough; then perhaps there is truly a ray of hope for future of manta and mobula rays.

Shawn Heinrichs: There is so much critical work that must be done now to safeguard our Oceans from serous threats it now faces. My mission is to use imagery and story telling to connect people to these globally important issues and inspire change.