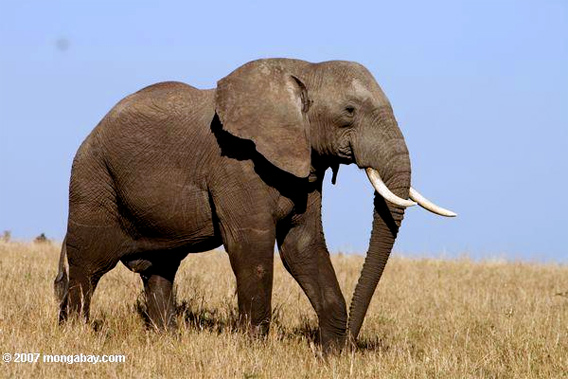 Elephant in Kenya. Photo by Rhett A. Butler.

By some estimates, more than 30,000 elephants were slaughtered across the savannas and forests of Africa and Asia for the ivory trade during 2012. The carnage represents as much as 4 percent of the world’s elephant population. Accordingly, some conservationists are warning that elephants face imminent extinction in some of their range countries.

While the plight of elephants is increasingly visible due to media coverage, less widely understood is the role religion plays in driving the ivory trade. This issue was explored at length in an explosive cover story published in National Geographic by Bryan Christy last October. The story, titled Blood Ivory, detailed how demand for religious trinkets is driving large-scale killing of Earth’s largest land animal.

But the victims are more than elephants. The ivory trade is funding wars in Africa and possibly even terrorism, while hundreds of rangers and conservation workers have been killed in the line of duty in recent years. The trade is increasingly controlled by criminal syndicates, which also traffic in weapons, drugs, and people. Christy touches on these issues and more in his story.

In an interview with Mongabay.com ahead of his appearance next week at the 3rd Annual New York Wildlife Conservation Film Festival, Christy discussed the ivory trade as well as the reaction to his National Geographic cover story.

Besides National Geographic, Christy’s writing has appeared in Foreign Policy, Playboy, and various law journals. He is author of The Lizard King, an in-depth look the reptile trade that is soon to be released as a feature film from Fox2000 Pictures.

AN INTERVIEW WITH BRYAN CHRISTY

Bryan Christy: I was a lawyer in Washington, DC before turning to journalism. I specialized in international trade and investment, and enjoyed it very much.

Mongabay.com: What was the biggest surprise during your work on the National Geographic cover story, Blood Ivory?

I was surprised that no one had ever talked about the role of religion and religious followers in driving today’s ivory trade. It was so obvious across countries that a significant percentage of ivory in trade was being carved into religious and spiritual items and yet no one mentioned it. Instead the media and many NGO reports focused on the role of countries, as if countries were homogenous and could be brought to task.

I was surprised, too, that the Chinese government has such a direct interest in the ivory trade. It controls the arts and crafts trade association that oversees the country’s ivory trade. It is the major player in the business. It owns retail shops. It sponsors university training of a new generation of ivory carvers. After the 2008 auction it built the world’s largest ivory carving factory, clearly anticipating an expanded ivory trade. This past summer China’s delegate to CITES declared the ivory ban a failure and sought to expand trade further by including not only ivory from naturally dead elephants but also from those that had been poached. Ivory sales already open the door to illegal traders, but allowing poachers to launder their ivory would open the door wider still.

Finally, I am surprised that for all the comparisons experts make between wildlife trade and the guns or narcotics trade, not a single transnational ivory kingpin in Africa or Asia has ever been identified, let alone put in jail. Not one. In 24 years! There should be no discussion of legalizing ivory, or of 1-off sales, when it is very clear not a single country can adequately police itself.

Mongabay.com: What has been the reaction to the story?

Bryan Christy: The reaction has been both immediate and ongoing. In the Philippines National Police conducted nationwide ivory sweeps. In Italy the Forestry Police raided shops in Vatican City and Abruzzo. Because of letter writing by National Geographic readers the Vatican recently committed to tentative steps to improve things. Secretary of State Clinton held a roundtable on wildlife trade in November, and a joint Congressional caucus also held a hearing focused on ivory. There is a CITES meeting in March with significant issues very much in play, most notably the idea of creating an international ivory market along the lines of the diamond trading system. This would be a disaster for elephants. 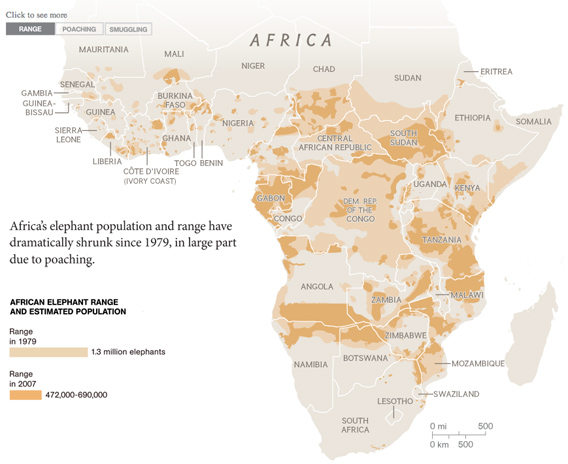 Bryan Christy: National Geographic has produced a film, Battle for the Elephants, which airs on PBS February 27, 2013. It covers part of my investigation in China. I put a great deal into the National Geographic story, certainly a book’s worth of effort, and I’m more than pleased and grateful the magazine gave it the space it needed.

Mongabay.com: Does the visibility generated by a story like Blood Ivory make it any more difficult for you to do future reporting?

Bryan Christy: There is a trade-off to be sure, but the tie goes to the person putting the stories out there. I’ve gained an enormous network as a result of these stories. I also try exceedingly hard to give voice to all sides of a story. Most people understand that.

Mongabay.com: What else is on your radar these days?

Bryan Christy: I’ve got a book on organized crime in the works, and some other things cooking.