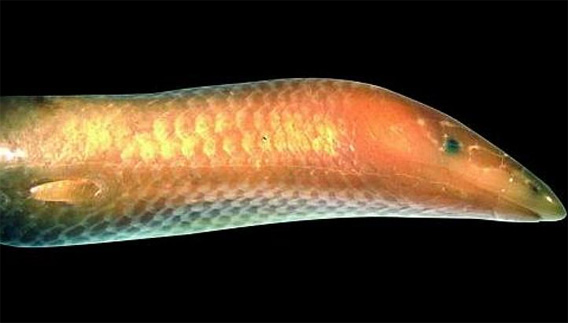 An international team of scientists have described a bizarre new species of worm-like lizard that lives underground. Strangely, they named it the “Moby Dick” mermaid skink.

The researchers chose Sirenoscincus mobydick for the lizard’s unusual appearance, which includes a complete absence of pigmentation, a lack of rear legs, flipper-like front legs, and nearly non-existent eyes, characteristics that the scientists liken to the fictional albino sperm whale conceived by author Herman Melville in his literary classic Moby Dick. The scientists say the species has anatomical traits found in amphibians, reptiles, mammals and birds.

Sirenoscincus mobydick was described last year in the journal Zoosystema.

Isolated for 88 million years, the island of Madagascar has high levels of endemism. About ninety-five percent of its reptiles are found no where else on Earth.