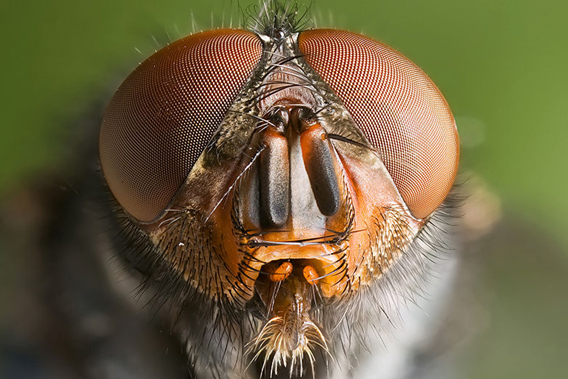 The face of the blue bottle fly (Calliphora vomitoria). New research shows how this carrion-eater carries the mammals of the forest in his stomach. Photo by: J.J. Harrison.

Last year scientists released a study that is likely to revolutionize how conservationists track elusive species. Researchers extracted the recently sucked blood of terrestrial leeches in Vietnam’s remote Annamite Mountains and looked at the DNA of what they’d been feeding on: remarkably researchers were able to identify a number of endangered and rarely-seen mammals. In fact two of the species gleaned from these blood-meals had been discovered by scientists as late as the 1990s. In the past, trying to find rare and shy jungle animals required many man hours and a lot of funding. While the increasing use of remote camera traps has allowed scientists to expand their search, DNA sampling from leeches could be the next big step in simplifying (and cheapening) the quest for tracking the world’s mammals. But now a new study in Molecular Ecology adds another twist: flies.

Led by Sebastien Calvignac-Spencer with the Robert Koch Institute, a team of scientists have analyzed the DNA found in the stomachs of blood-devouring flies, known as blow flies and flesh flies; these are insects that feed on carrion, open wounds, or even feces, taking the animals’ DNA with them. Unlike the leech study, which only focused on Vietnam, Calvignac-Spencer and his team took samples from flies in two parks, one in Madagascar (Kirindy Reserve) and another in Cote d’Ivoire (Tao National Park).

“The main advantage in using flies is their worldwide distribution. Terrestrial leeches are on the contrary restricted to the tropical belt and even there cannot be found everywhere (for example they do not occur in the two forests in which we led our study),” Calvignac-Spencer told mongabay.com. In fact since terrestrial leeches are found neither in Kirindy Reserve or Tao National Park, flies were the next logical choice.

When the researchers put their flies to the test they were surprised by the abundant results. In Tao National Park, the researchers uncovered 16 mammals from the flies, including the pygmy hippopotamus (Choeropsis liberiensis) and Jentink’s duiker (Cephalophus jentinki), both of which are listed as Endangered by the IUCN Red List.

“One surprise was that we could sample the entire local community of primates [in Tao National Park] by analyzing ca. 120 flies,” Calvignac-Spencer told mongabay.com, which he called “not a tremendous effort” for getting DNA on all nine primate species in the protected area.

While the study’s authors write that carrion flies “represent an extraordinary and thus far unexploited resource of mammal DNA,” Calvignac-Spencer says that this doesn’t mean leeches should be avoided where available.

“Mammal DNA will probably be of better quality and persist longer in leeches than in flies,” he notes. Indeed last year’s study, found that DNA in leech blood-meals was still viable after four months or about the time it takes a terrestrial leech to get hungry again.

“As exemplified here, both [subjects] have pros and cons,” Calvignac-Spencer says. “So we expand the toolbox for conservation biologists but in no case say that it will supersede in all instances those already available.”

One other expansion that may be underway is using the new technology to track not just mammals, but birds, reptiles and amphibians too. In fact, Calvignac-Spencer’s research identified the DNA of the water rail (Rallus aquaticus) in a number of flies from Kirindy Reserve. In Tao National Park, they were able to extract the DNA of a hornbill and a frog, though were not able to track it all the way down to the species level.

Calvignac-Spencer cautions that finding DNA from non-mammal “is not a formal proof that it would work as well […] but this is a possibility to explore.”

Still, even as promising as the new method is, there are still some hiccups. For example, a number of the mammals could not be identified to their species level. Rats, mice, and shrews proved particularly difficult.

“The reason is that the database to which we compared our sequences did not contain sequences for all possible species,” explains Calvignac-Spencer. “This shows that the precision of our assignment (family/genus/species level) critically depend on the quality of reference databases, although an exhaustive database is not a strict prerequisite.”

Still, the new method has a ton of advantages: it’s non-invasive, it requires little more to do in the field than catching flies, and may be able to be done on the cheap, according to Calvignac-Specncer, especially if “next generation sequencing strategies are implemented.”

“We expect that costs in personnel will sharply decrease when compared to classical methods, e.g. transects, etc,” he notes. “Indeed there is no need to train people to recognize species (which takes a lot of time) and setting up fly traps is extremely fast and easy.”

Someday, leeches and flies may be used not only to identify which species are lurking in the woods, but also to estimate abundances, track population crises, prove or disprove the existence of a cryptic species, and even to find out the best places to look for new species.

(08/06/2012) Scientists have long known that African elephants (Loxodonta africana) are talented tree-topplers, able to take down even large trees in order to gobble out-of-reach leaves. However the extent of his behavior across a large area has been difficult to quantify. But a new study in Ecology Letters has used a bird’s-eye view—with 3-D—of Kruger National Park in South Africa to determine the impact of elephants on trees.

Smartphones promoted as a tool for indigenous forest protection

(07/23/2012) Smartphones beeping in the woods may be a welcome presence that augurs the increased ability of indigenous communities to be stewards of their own biodiverse forests. Representatives of these communities and their supporters have advocated that international conservation policies like Reduced Emissions through Deforestation and Degradation (REDD) be increasingly managed by the communities themselves.