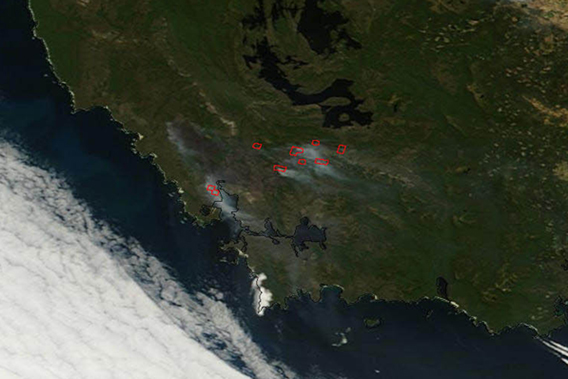 Yesterday Australia recorded its highest average temperature yet: 40.33 degrees Celsius (104.59 Fahrenheit). The nation has been sweltering under an unprecedented summer heatwave that has spawned wildfires across the nation, including on the island of Tasmania where over 100 houses were engulfed over the weekend. Temperatures are finally falling slightly today, providing a short reprieve before they are expected to rise again this weekend.

For six days, from January 2nd-7th, the nation’s average high has been above 39 degrees Celsius (102 degrees Fahrenheit). Noted meteorologist, Jeff Masters, writes at his blog that this is “the first time that has happened since record keeping began in 1910 [in Australia].”

The extreme heat has prompted Australia Bureau of Meteorology’s to add a new color to their maps—dark purple—to mark temperatures between 50 and 54 degrees Celsius (122-129.2 degrees Fahrenheit).

The Prime Minister of Australia, Julia Gillard, warned: “Whilst you would not put any one event down to climate change, weather doesn’t work like that, we do know over time that as a result of climate change we are going to see more extreme weather events and conditions.”

“The current heatwave—in terms of its duration, its intensity and its extent—is now unprecedented in our records,” David Jones with the Bureau of Meteorology told The Age. “Clearly, the climate system is responding to the background warming trend. Everything that happens in the climate system now is taking place on a planet which is a degree hotter than it used to be.”

Last year, Australia introduced its first carbon tax, which targets the nation’s 300 largest pollutions with a $24 price on every metric ton of carbon. The tax was vociferously opposed by the opposition government, the Centre-right coalition, which has pledged to overturn the tax.

As Australia suffers from brutalizing heat, the U.S.’s National Oceanic and Atmospheric Administration (NOAA), announced yesterday that 2012 was the warmest year on record for the continental U.S.

“An estimated 99.1 million people experienced 10 or more days of summer temperatures greater than 100°F, nearly one-third of the nation’s population,” the NOAA stated.

Climate scientists have long warned that extreme weather, such as droughts and heatwaves, will rise both in frequency and severity as the world continues to warm.

(12/05/2012) A new analysis finds that 21 wealthy countries spent five-times more on subsidizing fossil fuels in 2011 than they have on providing funds for poor nations to cut greenhouse gas emissions and adapt to the impacts of climate change. The analysis, by Oil Change International, comes in the midst of the current UN Climate Summit held in Doha, Qatar; progress at the talks has been stymied due to the gulf between poor and rich nations, including on the issue of climate financing.