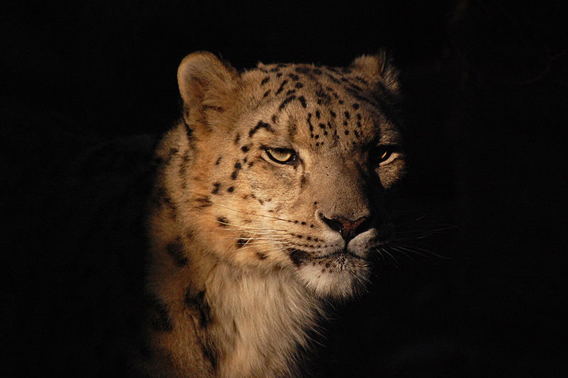 Snow leopard in the Toronto Zoo. Photo by: John Vetterli.

The trading of big cat pelts is nothing new, but recent demand for snow leopard pelts and taxidermy mounts has added a new commodity to the illegal trade in wildlife products, according to the Environmental Investigation Agency (EIA). Traditionally, the market for large cat products has centered around tiger bones and parts for traditional Chinese medicine. Snow leopards (Uncia uncia), however, are a novel trend in the illegal wildlife trade arena and skins and taxidermy mounts are the most recent fad in luxury home décor.

The EIA, a UK-based non-profit organization whose mission is to investigate crimes to the environment, are concerned that attention to the plight of snow leopards is compromised because of the global conservation focus on tigers. While tiger poaching is a rampant threat, the EIA estimates that for every tiger poached, approximately six leopards are taken, including snow leopards.

Experts have estimated that there are between 4,000 and 6,000 snow leopards left in the wild, making them one of Asia’s most endangered mammals. This estimate was calculated several years ago, however, and it is believed that the number today is significantly lower.

Results of EIA investigations reveal that the majority of snow leopard pelts are being harvested in China, Mongolia, India, Nepal, and Pakistan. Beginning in 2005, open trade in large cat products has declined and most of the illegal transactions in large cat trading is done in secret, making it difficult to monitor. Investigators from the EIA have documented hundreds of sales in illegal cat parts, but this detection success may be marginal compared to the actual trade.

“The skins uncovered by our investigators are just the tip of the iceberg,” says Debbie Banks, the head of EIA’s Tiger Campaign.

International Customs agents approximate the detected amount of illegal trade to be merely a tenth of the actual rate, meaning over 1,000 snow leopards have been killed and traded in the past dozen years or approximately a fifth of the estimated wild population of snow leopards on the planet. This means more than just a decline in leopard populations.

“Snow leopards are valuable indicators of environmental health,” says Tariq Aziz, leader the World Wildlife Fund’s Living Himalayas Initiative. “…their declining numbers is a sign that the places they live are also threatened.”

While novel trends in the luxury home décor market have been driving a recent increase in the trading of snow leopard skins, populations of snow leopards have been in jeopardy for quite some time. Unusual for most endangered species, habitat degradation is not the main issue for declining populations of snow leopards. These cold-hardy cats inhabit frigid, rugged, high-elevation environments that are inhospitable to most human development. In addition to poaching, the two gravest threats to wild snow leopards are a decline in their native prey and direct killing by ranchers and herders.

In recent years, snow leopards have been under threat as increased grazing has eliminated the cat’s natural prey. Facing less food, some snow leopards have turned to prey on domestic animals, which makes them targets for livestock owners. While many snow leopard killings are not motivated for sale in the illegal wildlife trade, inevitably, that is where they end up. A herder who kills a leopard eliminates a threat to his flock and may also earn a payout for his kill. The typical price paid for a snow leopard pelt varies by region and purpose: some pelts are sold locally for a mere few dollars while others, sold to tourists and foreigners, go for hundreds or even thousands of dollars.

Snow leopards are elusive; they are stealthy, well-camouflaged, and not commonly encountered in the wild. While their geographic distribution encompasses a wide area, their distribution is patchy and they are not common throughout their range. Snow leopards are a handsome cat with a thick, white, rosette-studded coat, which makes their pelts such a luxury item.

According to the Convention on International Trade in Endangered Species (CITES), “range states,” or countries where snow leopards are distributed, are obligated to report on the status of illegal trade operations in endangered species. Currently, not a single country of the 11 has submitted a report. There is an urgent need for information regarding illegal trade in snow leopard parts. The EIA states that snow leopard conservators (like CITES) are in need of more specific information, including: “…the number of leopards poached and entering the trade…number of cases currently being investigated…sentences posed against successful convictions, and trans-boundary issues affecting trade.”

Without knowing how many animals are actually being trafficked and where exactly they are coming from, advocates like EIA can do little to help.
While the future for snow leopards seems bleak, there is reason to be optimistic. Conservation organizations are spearheading projects and programs to curb the killing. In Mongolia the International Snow Leopard Trust has organized a community-based handicraft program to offer a market for local handmade goods in exchange for a commitment to conserve snow leopards. In India the Snow Leopard Conservancy has partnered with locals to capitalize on eco-tourism opportunities focused on snow leopard conservation and traditional cultural experiences for tourists. Other partners, like the Wildlife Conservation Society, are focusing on livestock protection and husbandry improvements to reduce the accessibility of stock to leopards and have piloted the first livestock predation insurance program in Afghanistan.

(07/18/2012) Scientists have captured and collared two snow leopards (Panthera uncia), arguably one of the world’s most elusive predators, in Afghanistan for the first time. Undertaken by researchers with Wildlife Conservation Society (WCS) and Afghani vets, the successful operation was conducted as a new study finds that snow leopard habitat could shrink by nearly one-third due to anthropogenic climate change in the Himalayas.

(07/18/2012) Panthera, a wild cat conservation group, and the Snow Leopard Trust have released the first footage of snow leopards with their mothers in their dens in Mongolia.

(07/13/2011) Decades of war and poverty has not exterminated snow leopards (Panthera uncia) in Afghanistan according to a new paper in the International Journal of Environmental Studies, written by researchers with the Wildlife Conservation Society (WCS). Instead the researchers report a healthy population of the world’s most elusive big cat in Afghanistan’s remote and peaceful Wakhan Corridor region. Monitored by camera trap in the region, WCS researchers were able to identify 30 snow leopards in 16 different locations.