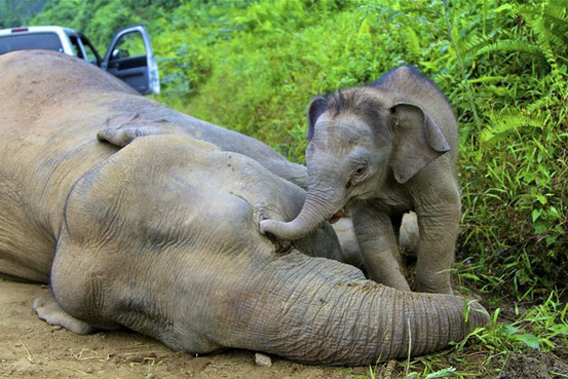 Three-month-old Bornean elephant calf next to dead mother. Officials suspect this elephant, and so far 13 others, were poisoned. Photo by: Sabah Wildlife Department.

Wildlife officials in the Malaysian state of Sabah have found the bodies of 14 Bornean elephants in Gunung Rara Forest Reserve, and suspect that more may be found dead. While tests are pending, they believe the elephants were likely poisoned due to damage in the animals’ digestive tracts. Only around 2,000 Bornean elephants (Elephas maximus borneensis) are left on the island of Borneo with the vast bulk found in Sabah.

“We believe that all the deaths of these elephants are related,” the head of Sabah’s Wildlife Department (SWD) Laurentius Ambu, told the BBC. In one case an 3-month-old elephant calf was found next to its dead mother. Rescuers say the baby, dubbed “Joe,” is healthy and has been moved to Lok Kawi Wildlife Reserve.

In fact, Ambu yesterday told the Wall Street Journal that “We suspect poison was spread over the area by plantation workers. We are waiting for lab results to determine if the elephants died of poisoning or bacterial infection.”

However, more information will be needed to make sure a determination. Oil palm plantations have spread widely across Sabah in recent decades, often replacing forest.

“Conversions result in fragmentation of the forests, which in turn results in loss of natural habitat for elephant herds, thus forcing them to find alternative food and space, putting humans and wildlife in direct conflict,” Executive Director of WWF-Malaysia, Dionysius S K Sharma, said. Sharma also recommends that Bornean elephants become elevated to ‘totally protected’ status in the country.

Genetic testing has shown that Bornean elephants are a distinct subspecies of Asian elephants. As the world’s smallest elephant, they are sometimes be described as “pygmy elephants” though adults can still weigh upwards of 5 tons.

(06/01/2012) Three critically endangered Sumatran elephants were poisoned to death within an palm oil plantation on the island of Sumatra, reports the Associated Press.

(04/11/2012) A video camera trap project called Eyes on Leuser has captured wonderful footage of a very curious herd of Sumatran elephants (Elephas maximus sumatranus) in the island’s Leuser ecosystem. The project has already documented a wealth of species, including imperiled and elusive animals like the Sumatran tiger, marbled cat, and white-winged duck.