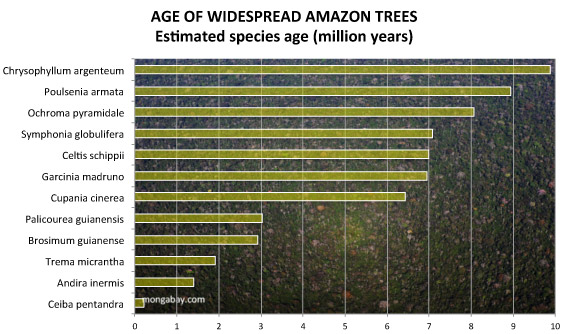 Estimated genetic ages of trees in the study. Photo by Rhett A. Butler

Some Amazon rainforest tree species are more than eight million years old found a genetic study published in the December 2012 edition of Ecology and Evolution.

The findings indicate that many Amazon tree species have survived warm periods in the past and are therefore likely to survive climate change projected for the year 2100. Air temperatures in the Amazon during the early Pliocene were similar to Intergovernmental Panel on Climate Change projections for the region in 2100 under a moderate carbon emissions scenario, while temperatures in the late Miocene (5.3-11.5 million years ago) are roughly what the IPCC forecasts under a highest carbon emissions scenario.

The study seems to be at odds with other research suggesting that many Amazon trees would face extinction from higher temperatures alone. For example a 2008 study published in the Proceedings of the National Academy of Sciences (PNAS) projected up to 50 percent of “rare” species across the Amazon could disappear.

However the authors caution that the results do not indicate that Amazon trees are out of the woods yet — other environmental and ecological changes still leave the region highly vulnerable.

“The past cannot be compared directly with the future. While tree species seem likely to tolerate higher air temperatures than today, the Amazon forest is being converted for agriculture and mining, and what remains is being degraded by logging, and increasingly fragmented by fields and roads,” said Lewis in a statement. ” Species will not move as freely in today’s Amazon as they did in previous warm periods, when there was no human influence. Similarly, today’s climate change is extremely fast, making comparisons with slower changes in the past difficult.”

“With a clearer understanding of the relative risks to the Amazon forest, we conclude that direct human impacts – such as forest clearances for agriculture or mining – should remain a focus of conservation policy,” said Lewis. “We also need more aggressive action to reduce greenhouse gas emissions in order to minimize the risk of drought and fire impacts to secure the future of most Amazon tree species.”

The Amazon is Earth’s largest rainforest. Nearly two-thirds of the Amazon lies within the borders of Brazil, which has made great progress in reducing deforestation since 2004. However deforestation in Amazon countries outside Brazil is holding relatively steady.

(06/21/2010) The Sunday Times over the weekend retracted a column that accused the Intergovernmental Panel on Climate Change (IPCC) of making a ‘bogus rainforest claim’ when it cited a report warning that up to 40 percent of the Amazon could be “drastically” affected by climate change. The ‘Amazongate’ column, authored by Jonathan Leake, Science & Environment Editor of the Sunday Times, was immediately seized upon by climate skeptics as further evidence to discredit the IPCC just two weeks after it was found to be using shoddy glacier data in its 2007 climate assessment. But now the Sunday Times has removed Leake’s column from its web site and issued on apology, admitting that the Amazon claim was indeed supported by scientific research. The Sunday Times also acknowledged misconduct in the way one of the story’s sources—Simon Lewis of the University of Leeds in Britain—was quoted.

(03/19/2010) Recently, Boston University issued a press release on a scientific study regarding the Amazon’s resilience to drought. The press release claimed that the study had debunked the Intergovernmental Panel on Climate Change’s (IPCC) theory that climate change could turn approximately 40 percent of the Amazon into savanna due to declining rainfall. The story was picked up both by mass media, environmental news sites (including mongabay.com), and climate deniers’ blogs. However, nineteen of the world’s top Amazonian experts have issued a written response stating that the press release from Boston University was “misleading and inaccurate”.