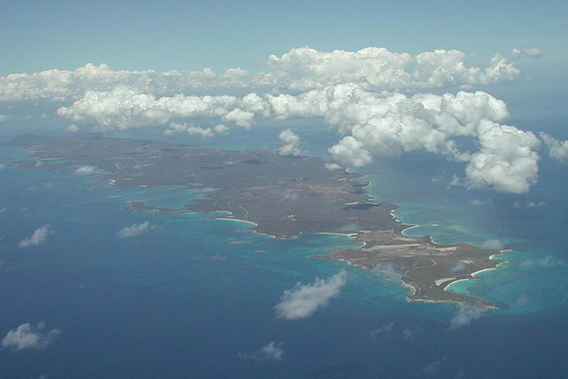 Life in the ocean require nutrient, but too much of a good thing can be hugely detrimental. Nutrient pollution from agricultural and industrial runoff causes serious ecological harm in the world’s marine waters, at times producing massive “dead zones” where much of the dissolved oxygen has been stripped making it difficult for most marine animals to live there. A new study by scientists with the U.S. National Oceanic and Atmospheric Administration (NOAA) attempts to establish a baseline of nutrient levels in the largely pristine waters around the island of Vieques off of Puerto Rico. Used by the U.S. Navy until 2003, when a series of protests prompted their withdrawal, the island is now a National Wildlife Refuge and is expected to see a new influx of tourism.

“There is no significant agricultural activity and no industrial sources of nitrogen or phosphorous on the island,” the scientists write in their study published in mongabay.com’s open access journal Tropical Conversation Science. “Populations of free roaming horses and wild dogs may be adding to the nutrient budget, and human waste, from the wastewater treatment plant, septic systems and possibly untreated waste, is almost certainly an important source,”

Taking 193 samples over 40 sites for nutrients—including nitrogen, phosphorous and silica—the scientists found that the waters around Vieques have similar nutrient concentrations as nearby Puerto Rico, and currently do not pose a major problem. The researchers did find, however, significantly higher levels of nutrients in lagoons around Vieques but they theorize that this is naturally occurring, likely due to lagoon depth and connectivity to the wider ocean.

“The lagoon ecosystems of Vieques are of great ecological significance, ranging from bird, fish and crab habitats to the unique dinoflagellate populations of the bioluminescent bay,” the researchers note.

The researchers view their work as establishing an important baseline as Vieques Island shifts from a military base to a tourism economy.

“Following the departure of the Navy in 2003, the economy of Vieques has slowly shifted towards tourism. With this shift, significant development is occurring and is expected to continue,” they write. “This development may lead to increased nutrient loads from increased human waste (as both permanent and tourist populations increase) and increased fertilizer inputs (from heavily landscaped areas such as golf courses, hotel grounds and lawns).”

(01/18/2011) The floods ransacking the Queensland coast have cost 20 lives and $500 million worth of property damage. Now, huge volumes of water are pouring into the ocean, threatening the Great Barrier Reef, which extends for thousands of kilometers off the coast. Although it may take years to know the full consequences of the flooding, Australian scientists are already warning of serious damage. For now, the biggest problems are concentrated on the southern part of the reef, where three overflowing rivers—the Burdekin, the Fitzroy, and the Burnett—have released millions of gallons of heavily polluted water into the sea. So far, prevailing winds have confined the majority of the floodwaters to within 65 kilometers of shore. But in time, the damage may grow to affect the entire reef system.

(12/29/2010) A dead zone off the coast of West Africa is reducing the amount of available habitat for Atlantic tuna and billfish species, reports the National Oceanic and Atmospheric Administration in a study published in Fisheries Oceanography. The zone is growing due to global warming and is expected to cause over-harvest of tuna and billfish as the fish seek higher levels of oxygen in areas with greater fisheries activity.

Coral reef survival depends on the super small, an interview with Forest Rohwer

(08/30/2010) If you take a teaspoon and dip it into the ocean what will you have? Some drops of lifeless water? Only a few decades ago this is what scientists would have said, however, the development of increasingly powerful microscopes have shown us a world long unknown, which has vital importance for the survival of one of the world’s most threatened and most treasured ecosystems: coral reefs. A single milliliter of water is now known to contain at least a million living microbes, i.e. organisms too small to see without a microscope. After discovering their super-abundant presence, researchers are now beginning to uncover how these incredibly tiny life-forms shape the fate of the world’s coral reefs.

(07/22/2010) A new image by NASA reveals the extent of the world’s marine dead zones, which a study in 2008 found were doubling every decade. At that time 415 dead zones had been identified worldwide. Dead zones are regions of the ocean where dissolved oxygen has fallen to such low levels that most marine species can no longer survive. Such conditions are often seasonal.