A new report by the NGO, International Rivers, takes an in-depth look at the role China is playing in building mega-dams worldwide. According to the report, Chinese companies are involved in 308 hydroelectric projects across 70 nations. While dams are often billed as “green energy,” they can have massive ecological impacts on rivers, raise local conflict, and even expel significant levels of greenhouse gases when built in the tropics.

“The Chinese state owned Sinohydro Corporation is now the largest hydropower company in the world. Many Chinese companies involved in the construction of large hydropower projects such as the Three Gorges Dam are now taking the lead role in new hydropower projects around the world,” reads the report which adds that “the China Export-Import Bank (China Exim Bank) has become a major funder of large dams.”

Nearly half of the dams in question are planned for Southeast Asia, while 28 percent are planned for Africa and 8 percent for Latin America. Since 2008, the number of dams that the Chinese are involved in has grown by 300 percent. Yet many of these projects lack any or stringent environmental and social policies.

“Few Chinese dam builders and financiers have adopted environmental policies in line with international standards,” the report notes, adding that Chinese companies have been involved with building notorious dams, such as the Gibe III in Ethiopia, the Bukan Dam in Malaysia, the Myitsone Dam in Myanmar, and the Merowe Dam in Sudan.

For example, over 50,000 people were forcibly moved in order to build the Merowe Dam. According to the report, the Sudan government “brutally oppressed any protests. Several people were killed and many more were injured in crack-downs by the security forces.”

A number of Chinese-financed dams have faced local and global resistance. Progress has been made in some cases: this year the Sinohydro Corporation has adopted its first ever environmental policy.

“Among other provisions, the world’s biggest hydropower company commits to fully comply with applicable laws on all levels, adopt all World Bank
safeguard policies, respect ‘no go’ zones including national parks and World heritage sites, conduct an open dialogue with local communities and NGOs, and create complaint mechanisms for all of its projects,” according to the report.

Still International Rivers warns that “environmental policies are only as good as their implementation on the ground. This will be the next great challenge for Sinohydro.” 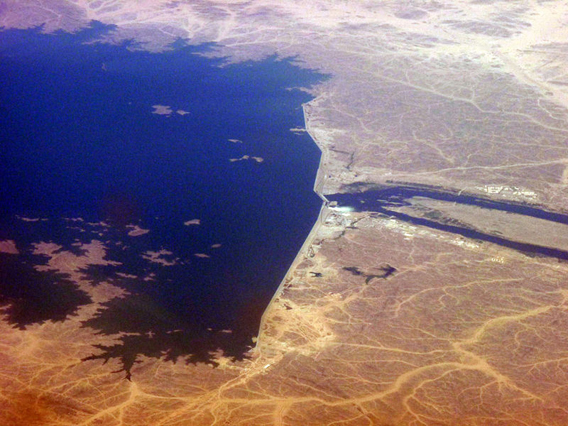 Aerial view of the Merowe Dam in Sudan. Photo by: Lubumbashi.

Controversial dam gets approval in Laos

(11/07/2012) Laos has given approval to the hugely-controversial $3.5 billion Xayaburi Dam on the Mekong River, reports the BBC. The massive dam, which would provide 95 percent of its energy production to Thailand, has been criticized for anticipated impacts on the river’s fish populations, on which many locals depend.

(10/09/2012) Construction on Brazil’s megadam, Belo Monte, has been halted again as around 150 demonstrators, most of them from nearby indigenous tribes, have occupied the main construction site at Pimental. Over a hundred indigenous people joined local fishermen who had been protesting the dam for 24 days straight. Indigenous people and local fishermen say the dam will devastate the Xingu River, upending their way of life.