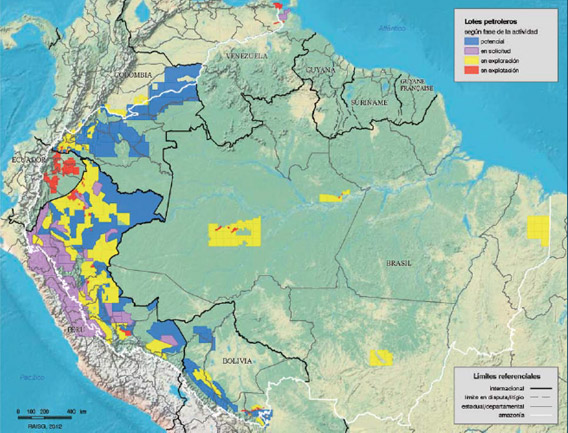 Concessions for oil and gas exploration and extraction are proliferating across Amazon countries, reports a comprehensive new atlas of the region.

The report, published by 11 civil society organizations and research institutions that form the Amazonian Network of Georeferenced Socio-Environmental Information (RAISG), relies on a range of sources to tally the oil and gas industry’s footprint in Earth’s largest rainforest. It finds areas blocked for oil and gas concessions amount to more than a million square kilometers or 14 percent of the Amazon. Exploration permits have been granted for 428,473 square kilometers, while exploitation licenses cover 40,717 sq km.

Oil and gas development is of concern in the Amazon because of the associated environmental impacts, including road construction, air and water pollution, and displacement of forest communities. Oil extraction in the Ecuadorean Amazon for example has been blamed for a number of social and environmental ills and is currently the subject of a multibillion dollar lawsuit originally filed on behalf of forest communities. However Ecuador is also notable in that it has offered to forgo oil development within Yasuni National Park provided it is compensated to do so. To date its fund has raised roughly $300 million of the 3.6 billion it says it needs to abandon exploitation.

The atlas, titled Amazonía bajo presión, also highlights other developments in the Amazon, including expansion of road networks, growing incidence of fire, a proliferation in hydroelectric projects, and a mining boom.

(02/04/2011) As large-scale mining, logging, and plantations threaten indigenous communities worldwide, a new report from the indigenous rights NGO Amazon Watch states that when extractive industries work in indigenous people’s territories, the peoples’ rights must be respected. The report argues that all indigenous groups have the right to ‘free, prior, and informed consent’ of any resource extraction occurring on their lands, and that this international standard should be upheld not only for obvious moral reasons, but for sound business.

Under siege: oil and gas concessions cover 41 percent of the Peruvian Amazon

(02/16/2010) A new study in the Environmental Research Letter finds that the Peruvian Amazon is being overrun by the oil and gas industries. According to the study 41 percent of the Peruvian Amazon is currently covered by 52 separate oil and gas concessions, nearly six times as much land as was covered in 2003. “We found that more of the Peruvian Amazon has recently been leased to oil and gas companies than at any other time on record,” explained co-author Dr. Matt Finer of the Washington DC-based Save America’s Forests in a press release. The concessions even surpass the oil boom in the region during the 1970s and 80s, which resulted in extensive environmental damage.