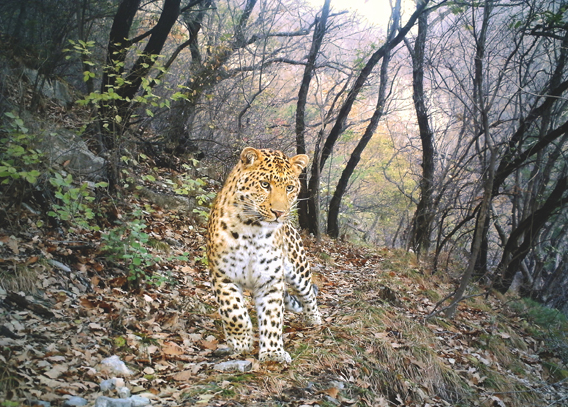 The third annual BBC Wildlife Magazine Camera Trap Photo of the Year contest has produced some stunning and surprising images, including a snow leopard sticking its tongue out, a rare giant pangolin, and wrestling monitor lizards. But the winner this year was the perfect shot of a young leopard in China.

“Our project researches leopard distribution in the forest reserves of Shanxi Province. In the Shuishui River Reserve, images from a camera-trap on a known leopard path have so far enabled us to identify four individuals, including this youngster,” said photographer Zhou Zhefeng of his winning photo, which won his conservation program nearly $5,000 in prize money.

This photo, along with other winners and runner-ups, are featured in the December issue of BBC Wildlife Magazine, which is on sale now.

Camera trap photography is a unique art form. Used most often be researchers to study rare and cryptic animals, camera traps take photos of wildlife when humans are absent. These specially designed cameras use motion sensor or infrared to snap photos and have been used to document never-before-seen behavior, catalogue wildlife populations, and even discover unknown species. However, years of wonderful—and often scientifically important—photos has increasingly led photographers to recognize camera trap photos as an art form in itself.

Split into three categories: portraits, behavior, and new discoveries, other winners in the contest include the rare image of a Bengal tiger feeding on a rhino carcass in India (behavior) and the photo of a small cat known as the oncilla in Bolivia (new discoveries). Both of these photos won over $1,500 for their respective conservation projects. Money prizes are donated by the World Land Trust and Páramo Directional Clothing Systems. 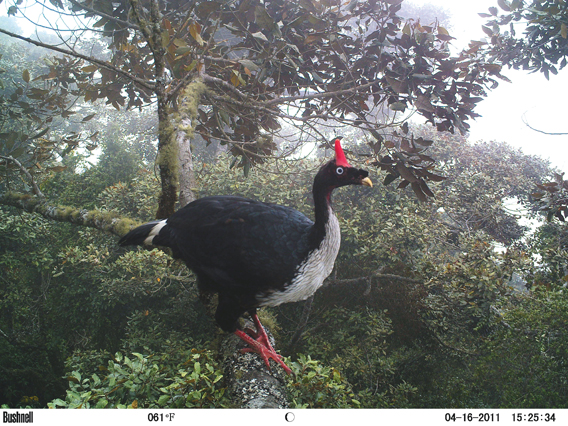 A horned guan (Oreophasis derbianus) in Guatemala. Not a guan at all, this bird is the last survivor of a family of birds. It’s listed as Endangered by the IUCN Red List. Photo by: Javier Rivas/BBC Wildlife Magazine. 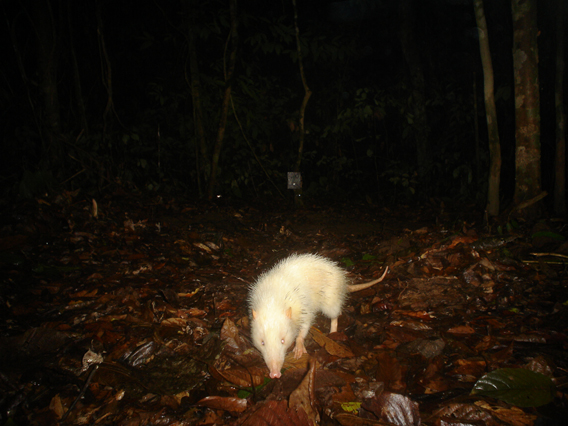 The little known moonrat (Echinosorex gymnura) photographed in Malaysian Borneo. Although it looks like a weird, white rat these animals are actually more closely related to hedgehogs. The moonrat is the only species in its genus, Echinosorex. Although imperiled by deforestation, it is currently listed as Least COncern by the IUCN Red List. Photo by: A.J. Hearn and J. Ross/BBC Wildlife Magazine. 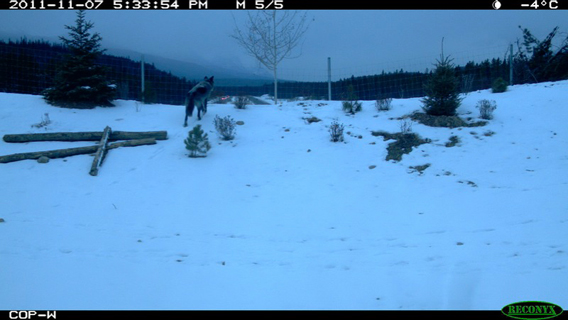 Wolf looking down onto traffic from a wildlife overpass. This photo was selected as one of the editor’s favorites. Photo by: Mirjam Barrueto/BBC Wildlife Magazine. 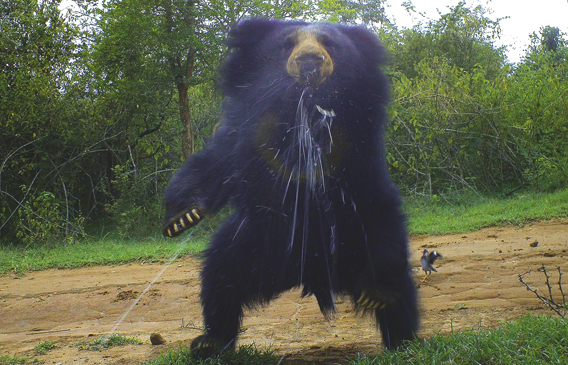 (08/12/2012) With the help of remote camera traps, wildlife rangers have confirmed that the Sumatran rhino (Dicerorhinus sumatrensis) still inhabits the Leuser ecosystem in northern Sumatra, making the forest the only place on the Earth where Sumatran tigers, orangutans, elephants, and rhinos survive in a single ecosystem, though all remain Critically Endangered.

(07/25/2012) The short-tailed chinchilla (Chinchilla chinchilla) once inhabited a range including the mountainous regions of Argentina, Bolivia, Chile and Peru, but today the species survives in only a handful of areas in northern Chile and Argentina. Worse still, evidence of the Argentinean populations are restricted to remains discovered in the droppings of their natural predators. But, since 2011, Pablo Valladares from the University of Tarapaca in conjunction with the National Forestry Corporation of Chile (CONAF) has been searching Tres Cruces National Park for previously undocumented populations, and it has finally paid off: Valladares and colleagues discovered two new colonies with remote camera traps.

(05/08/2012) Ever wonder what it would be like to be charged by a male gorilla? A new video (below) released by the Wildlife Conservation Society (WCS), gives one a first hand look. Shot in Cameroon’s Kagwene Gorilla Sanctuary, the video is the first camera trap footage of the incredibly rare Cross River gorilla subspecies (Gorilla gorilla diehli); listed as Critically Endangered, the subspecies is believed to be down to only 250 individuals.