by Robin Oisín Llewellyn on 20 November 2012 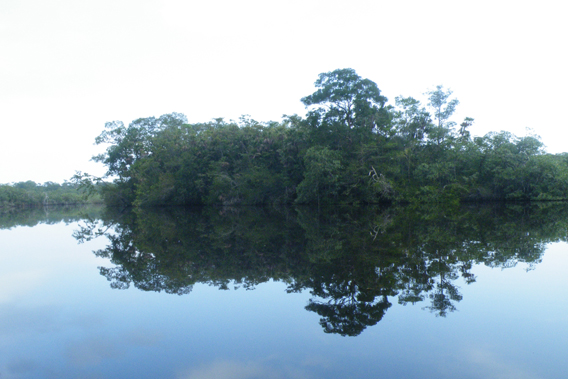 The Belizean government has approved an application by US Capital Energy to drill exploratory wells for oil in the Sarstoon Temash National Park in southern Belize.

The decision is believed to have been taken on November 1st by the National Environmental Assessment Committee (NEAC) of the Department of Environment, but the exact terms of the settlement have not yet been made public. The oil company,
backed by US energy investment group Aspect Holdings, has applied to drill at five points in the
Sarstoon Temash National Park and adjacent areas.

While oil extraction in national parks is banned under the Belizean National Parks Act, the government is largely satisfied with the company’s environmental statement

(ES) for exploratory drilling in the “Block 19” concession covering the park and neighbouring indigenous areas. NEAC has reportedly made its approval
conditional on the provision of further information relating to the proposed treatment of drilling mud, and relating to the company’s oil spill response
plan. It has also requested clarification on whether the company will dredge waterways, and has demanded the survey questionnaires that US Capital Energy
was to have circulated as part of its social assessment.

Sarstoon Temash National Park (STNP) is the second largest national park in Belize, and is listed under the Ramsar Convention as a wetland of international importance. It comprises
16,590 hectares of permanently and seasonally inundated tropical evergreen lowland forest, Manicaria swamp forest, and lowland peat shrubland. The only
known comfra palm forest in Belize grows within the park boundaries, as do the region’s best stretches of undisturbed red mangrove
forest. STNP is also home to the only known low-lying sphagnum moss bog in Central America, which fosters flower species believed to be unique.

Three assessments of US Capital Energy’s environmental statement were carried out by analysts from or on behalf of Belizean environmental NGOs, and all
found the company’s proposal to be “fatally flawed.” The scientific team of the Toledo Institute for Development and Environment (TIDE) highlighted the potential for toxic drilling materials and
benzene escaping from the well shafts, and in their evaluation
noted that the largest fault line in Central America runs through the park which could fracture the bore holes leading to groundwater contamination.

TIDE also drew attention to a fatal flaw in the company’s failure to detail the chemicals that will be added to the drilling fluid, and its provision of
contradictory information on whether drilling fluid would be water based or pseudo water based.

The government’s decision is the latest act in a long running drama that has pitted US Capital Energy and the government against the indigenous community
organization which co-manages the park, the Sarstoon Temash Institute of Indigenous Management (SATIIM).

The rangers of SATIIM are drawn from the indigenous Mayan and Garifuna communities that border the National Park, and they have been patrolling the area
throughout the company’s exploration phase which saw increased illegal logging along seismic lines, disruption to the park’s fauna, and the burning down of
over 250 acres of the unique sphagnum moss bog.

An evaluation on behalf of SATIIM by environmental
consultant Richard Steiner also found US Capital Energy’s drilling project to be flawed on the following grounds:

Scientists from the Environmental Law Alliance Worldwide (ELAW) highlighted the dangers to biodiversity of the access
roads, which destroy selected areas of vegetation to fragment and ultimately degrade rainforest ecosystems. In their evaluation they wrote: “Such fragmentation is the principal cause of the loss of ‘area-sensitive’ species
…and is considered the most serious threat to biological diversity.”

The evaluations of the ES also highlighted the hitherto unresolved legal injunctions against oil exploration stemming from the Supreme Court’s rulings of
Maya land claims in the area. The Q’eqchi’ Maya rainforest communities on whose lands US Capital Energy hopes to drill had long campaigned for full legal
title over the territories on which they relied for their livelihoods, and their claims were settled by the Supreme Court in 2007 (for two Maya villages) and 2010 (for
22 further Maya villages).

The government has so far refused to comply with the rulings’ instruction to issue written collective land titles to the communities, and currently is
appealing the 2010 decision. No oil exploration or extraction can occur on these contested lands with or without the consent of the inhabitants until the
government issues written title to the indigenous villages.

While Prime Minister Dean Barrow argues that the Supreme Court rulings don’t influence the prior agreements made with US Capital Energy, the eight year production sharing agreement made between the Belizean
Government and US Capital Energy in January 22, 2001 (revised on January 2, 2004) has expired, leaving the project currently progressing without a legal
basis.

The prominence of the 2007 and 2010 rulings has been heightened by the decision of four of the indigenous communities bordering the park to explicitly
withhold their consent from US Capital Energy’s project, and to nominate SATIIM as their representative in negotiations with both the company and the
government.

US Capital Energy presented its ES to a crowd it had bussed into the Maya village of Sunday Wood, a community it has heavily invested in and whose Alcalde
(mayor) Mateo Tush supports drilling. A collective letter from the leaders of five Maya and Garifuna
indigenous communities to the Chief Environment Officer and NEAC chairperson Martin Alegria requesting a delay to NEAC’s decision until they could review
all relevant information in the ES went unanswered.

The meeting on October 25th saw SATIIM director Gregory Ch’oc being silenced, his microphone grabbed
by Martin Alegria. All members of the public had their participation limited to one minute of speaking time. US Capital subsequently announced its
satisfaction with the success of the meeting, but its optimism may prove short-lived.

Statements from the rainforest communities of Conejo,Crique Sarco, Graham Creek, and Midway have asserted that they withhold their free, prior and informed consent to the drilling project,
and at their request SATIIM has contracted leading American law firm Sheppard, Mullin, Richter and Hampton LLP
to uphold their rights under the Supreme Court rulings.

Bulldozers are now entering the communities to create access for drilling, with a 13-meter wide road to Drilling Site A being measured by US Capital Energy
engineers.

(08/09/2012) Deforestation in Belize has accelerated since late 2010, reports a new satellite-based assessment of the tiny Central American country’s forest cover by CATHALAC (the Water Center for the Humid Tropics of Latin America and the Caribbean).