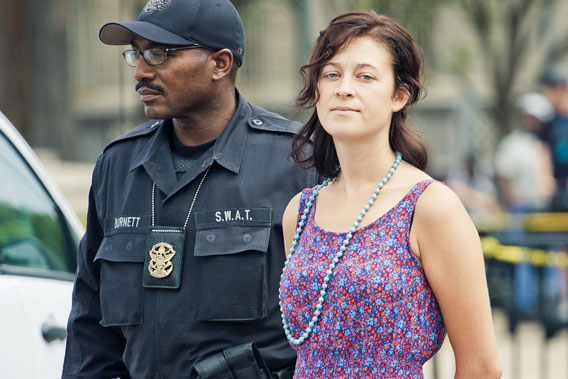 Protestor against Keystone XL Pipeline escorted away after arrest in 2010. Photo by: Josh Lopez/Tar Sands Action.

Hours after President Obama’s historic re-election, climate group 350.org announced a massive rally and march to apply pressure on the administration to reject the Keystone Pipeline, which would bring tar sands from Alberta down to the Gulf of Mexico and an international market. In 2011 the group and its partners carried out large-scale civil disobedience action, resulting in over 1,000 arrests, and a rally 12,000-strong that literally encircled the White House. The pressure, which was also brought to Obama campaign offices around the country, helped spur the Obama Administration to reconsider the pipeline, which has sat in limbo since then.

“One year ago we surrounded the White House to ask President Obama to be the leader we hoped for. Now is his chance to live up to our highest expectations. We can’t afford anything less,” 350.org wrote to supporters. “We’re not going to wait for him to come around either—if we want change, it comes from us. And it is coming.”

To that end, the group, which is among the most successful in raising awareness around climate change, is planning a rally for Washington D.C.’s Freedom Plaza that will also march to the White House. Civil disobedience is not on the agenda this time, instead in an online message the group says that the purpose is to “let the President know we haven’t forgotten, and that our conviction hasn’t cooled.”

While discussion of climate change was conspicuously absent from almost the entirety of the Presidential campaign, the devastation wrought by Hurricane Sandy has effectively brought the issue back into the media light. Although more research is needed, climatologists say that hurricanes are likely becoming more destructive—like Sandy’s 14 foot storm surge—due to rising sea levels and heavy precipitation both due to a warming ocean. In addition, recent research theorizes that the record sea ice melt in the Arctic this year could have created the weather phenomenon—known as a blocking pattern—that pushed Sandy into the coastline rather then perishing out at sea.

Sandy was not the only natural disaster to hit the U.S. In the last 9 months alone the country has suffered a series of abnormal heatwaves and wildfires, and one of the worst droughts in decades. Scientists say climate change is increasing the likelihood of such extreme weather events just as a baseball player on steroids increases their likelihood of hitting a home run.

Opposition against Keystone Pipeline runs high due to the higher carbon footprint of tar sands versus conventional oil, as well as fears of oil spills in environmentally sensitive areas. Proponents say it would bring jobs and oil from a friendly neighbor, however much of the oil would be sent overseas and most of the jobs (estimated at 5,000-6,000 by the U.S. State Department) would be temporary.

(01/26/2012) A new report by Media Matters finds that U.S. TV and print media were largely biased toward the construction of TransCanada’s Keystone XL Pipeline, which the Obama administration recently turned down. The report finds that guests and quotes were largely in favor of the pipeline in addition to news outlets consistently repeating job figures for the pipeline that have been discredited.

(11/10/2011) In what can only be described as a major victory for green activists, the Obama Administration has announced it will delay a decision on TransCanada’s controversial Keystone XL pipeline for 12-18 months. Notably, putting the decision off until after the last election. The delay comes less than a week after about 12,000 people encircled the White House in opposition to the Keystone XL pipeline, which they argue threatens one of the most important water supplies in America’s heartland and will worsen climate change.

(11/07/2011) One year to the day before the 2012 US election, up to 12,000 activists encircled the White House to protest the Keystone XL pipeline, a proposed 1,700 mile pipeline that would carry oil from Canada’s infamous tar sands to the US and other foreign markets. Critics of the TransCanada pipeline have warned of potential spills in America’s heartland as well as the climate impacts of allowing more tar sands oil, which has a higher carbon footprint than conventional sources, into the US and other markets. The issue has galvanized climate and environmental activists in the US with the massive rally on Sunday preceded by civil disobedience actions in late summer that lead to the arrests of 1,253 people.