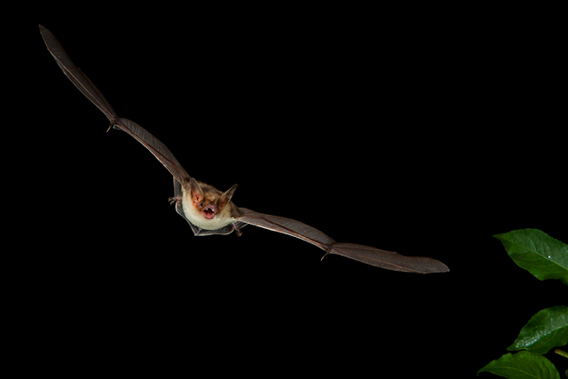 A change in prey abundance due to climate change could impact the lesser mouse-eared bat (Myotis blythii). Photo by: Christoph F. Robiller.

Global climate change could devastate bat populations around the world, threatening to tear yet another thread from the tapestry of biodiversity should current temperature trends persist, according to a new study.

“Bats were the focus for this study because they are relatively understudied but due to their sensitivity to environmental stress, they are excellent indicators of climate change,” Hayley Ann Sherwin, co-author of the paper published in Mammal Review, with the Queen University in Belfast, told mongabay.com.

Hayley, along with Ian Montgomery and Mathieu Lundy, analyzed 47 species, across Europe and Northern Africa, and found that 38 of 47 (81 percent) species were at risk from climate change.

“This article reveals that climate change has the potential to change aspects of every stage of a bat’s lifecycle e.g. feeding, reproduction, growth and hibernation,” says Sherwin.

Bats are one of the most diverse and dispersed groups of mammals, therefore are subjected to a wide variety of climates and conditions. They also form vital components in many ecosystems as they are involved in pollination, predator and prey interactions, and seed dispersal; even bat guano is a rich food source for many decomposers.

But climate change could imperil many aspects of bat life, according to the review.

Foraging is one example: insectivorous bats depend on food that is highly sensitive to climatic changes. Insects depend on water for reproduction, so reduced rainfall could mean fewer numbers for bats to eat. Fruit-eating species will likely be affected too, as fruit production is often tied to temperature and rainfall.

Roosting is another important process of a bats’ lifecycle for resting, raising young, torpor (a form of sleep bats require daily to conserve energy) and seasonal hibernation that may make them vulnerable to climate change. Higher temperatures can cause early awakening; if this occurs before food levels are high enough, starvation is a possibility.

Species specializing in particular roost types could be at greatest risk i.e. those that roost in caves and trees. Eleven species were noted to be at risk due to roosting behaviour says the report.

Reproduction of the 47 species reviewed may not be affected by climate change the authors say, however they recommend more research to find the links associated between climate change and bat reproductive behavior.

Bats that persist in small home ranges, migrate seasonal, and those live in high altitude or latitude ranges are at the greatest risk of climate change.

Changes in climate could potentially leave such species with nowhere to go. The authors suggest that 31 of the 47 species are at risk due to one or more of these factors.

The scientists also warn that extreme weather is likely to affect those occupying the tropics. Still, as climate changes’ effect on extreme weather conditions is currently difficult to predict, no estimates were made on numbers of species at risk.

“Climate change will not have a uniform effect on all bat species; some are more vulnerable than others, depending on their feeding, roosting and reproductive strategies,” says Sherwin, adding that “considering current temperature increases are only one fifth, or less, of those predicted over the next century, it seems like bats, like many organisms, will face challenges at one or more stages of their lifecycle.”

While understanding the impacts of climate changes on bats is still at a preliminary stage, the review has helped provide a base for bats to be incorporated into future frameworks of risk assessment.

(07/09/2012) Bushmeat hunting is well-known to be decimating animal populations in Africa, but has been little studied much of Southeast Asia. However, a new paper in mongabay.com’s open access journal Tropical Conservation Science shines light on the size and scale of bushmeat poaching in the Philippines. Studying an anonymous community near a national park on the island of Luzon, researchers found that poachers targeted 22 species, ten of which are considered either threatened or near threatened with extinction by the IUCN Red List.

(04/02/2012) Indian flying foxes (Pteropus giganteus) are now soaring a the Wildlife Conservation Society’s (WCS) Bronx Zoo. With wingspans that reach 4 to 5 feet (1.2-1.5 meters), they are one of the world’s largest bats.

(10/31/2011) First identified in 2005, white-nose syndrome has killed over a million bats in the US, pushing once common species to the edge of collapse and imperiling already-endangered species. Striking when bats hibernate, the disease leaves a white dust on the bat’s muzzle, causing them to starve to death. Long believed to be caused by a fungus in the genus Geomyces, researchers publishing in Nature have confirmed that the disease is produced by the species, Geomyces destructans.