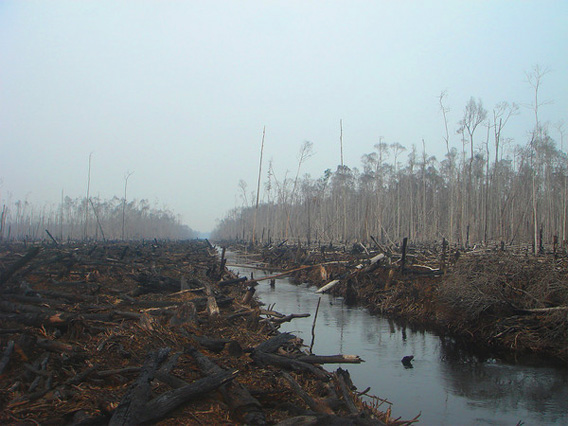 Disney this week announced sweeping changes to its paper-sourcing policy that will exclude fiber produced via the destruction of tropical rainforests.

The policy comes in response to a campaign by the Rainforest Action Network, an environmental activist group that had targeted Disney for its lack of safeguards to exclude paper produced by two controversial Indonesian suppliers: Asia Pulp and Paper (APP) and Asia Pacific Resources International Holdings (APRIL). The paper giants have been linked with destruction of key wildlife habitat on the Indonesian island of Sumatra as well as conflict with local communities. Sumatra lost more than half its natural forest cover since 1985.

The new policy has two phases. The first focuses on paper sourced directly by Disney, which is the largest publisher of children’s books and magazines. The second addresses paper sourced by Disney’s independent licensees.


The policy aims to minimize the consumption of paper, including eliminating paper products containing “irresponsibly harvested” fiber like that from wildlife-rich forests, wood from genetically modified tree plantations, and fiber from plantations established after 1994 at the expense of natural forests. Disney says it will maximize recycled content and fiber sourced from companies certified under the Forest Stewardship Council, an eco-standard. Disney will report on its progress on an annual basis.

“The paper policy is an example of how Disney conducts business in an environmentally and socially responsible way, and demonstrates the Company’s commitment to creating a lasting, positive impact on ecosystems and communities worldwide,” said Dr. Beth Stevens, senior vice president, Disney Corporate Citizenship, Environment and Conservation, in a statement.

“Rainforests are more valuable left standing than being pulped for paper,” said Rebecca Tarbotton, the Executive Director of Rainforest Action Network (RAN), which worked with Disney on the policy. “Disney is adding its voice to the growing chorus of companies demonstrating that there’s no need to sacrifice endangered forests in Indonesia or elsewhere for the paper we use every day.”

“Indonesia has one of the highest rates of deforestation in the world due, in part, to pulp and paper giants like Asia Pulp and Paper and APRIL,” added Lafcadio Cortesi, RAN’s Asia Director. “Disney’s commitment will reduce the demand for paper made at the expense of rainforests while creating incentives for improved forest management and green growth.”

RAN says the move by Disney however is particularly significant due to the scale of its operations.

“The new paper policy will be applied to the Company’s entire global operations and those of its supply chain. The commitment includes Disney’s media networks, theme parks, resorts, cruise ships, and all its product packaging, copy paper and book publishing as well as the 3,700 licensees that use Disney characters. It will also influence the operations of 25,000 factories in more than 100 countries that produce Disney products, including 10,000 in China.”

(09/27/2012) Asia Pulp & Paper (APP) must stop accepting timber sourced from clearance of rainforests and peatlands for its sustainability pact to have any credibility, says Greenpeace.

(09/06/2012) Asia Pulp & Paper (APP) has established a moratorium on natural forest conversion in Jambi province on the island of Sumatra, according to a report issued by the Indonesian forestry giant.

(08/10/2012) Indonesia’s pulp and paper targets incompatible with green growth goals Indonesia’s ambitious targets for boosting pulp and paper production to make it the world’s lowest-cost producer are at odds with its push for green economic growth should expansion proceed on its current business-as-usual path, said a forestry expert presenting at the annual meeting of the Association for Tropical Biology and Conservation (ATBC) in Bonito, Brazil.

(02/15/2012) Beleaguered paper giant Asia Pulp & Paper was sharply criticized Wednesday for its claims that its operations are certified sustainable by independent auditors. WWF said its survey of certifiers and certification schemes shows that none apply to ‘the most controversial operations’ of APP’s suppliers: clearing of rainforests and peatlands that are home to endangered tigers, elephants, and orangutans. In responding to complaints from environmentalists that its operations are responsible for large-scale destruction of native forests, APP often touts various certification standards which it says demonstrate its commitment to sustainability. Yet the new WWF survey found that these standards don’t apply across all of the paper giant’s operations &#8212; APP’s suppliers in Indonesia continue to harvest and convert natural forests. Nor do the certification standards necessarily prove that APP’s forest management practices are ‘sustainable’.