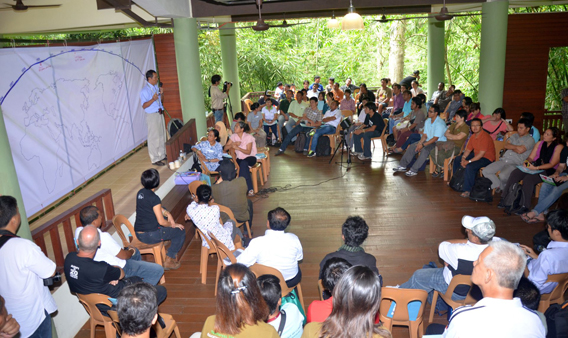 Last year, a coalition of environmentalists and locals won a David-versus-Goliath battle against a massive coal plant in the Malaysian state of Sabah on Borneo. After facing a protracted campaign—including expert analysis of green energy options for Sabah—the state government announced it was scuttling plans to build the coal plant on a beach overlooking the Coral Triangle. Now, victorious grassroots campaigners are hosting the inaugural meeting of the Southeast Asia Renewable Energy People’s Assembly (SEAREPA), bringing 80 organizations together to discuss green energy options across southeast Asia.

“SEAREPA is a process that started over a year ago, and we are honored to see participants from 11 countries here today, all eager to share their views on how power is generated in their communities, regions and countries, and what renewable energy means to them,” SEAREPA coordinator Gabriel S. Wynn said in a statement.

While the 3-day-assembly grew out of the campaign against the coal plant, it hopes to make its success more widespread by creating an open-source information source for green energy across the whole region, much of which largely depends on coal for energy.

“Think of SEAREPA as a communal renewable energy workshop and laboratory, one that you can access from anywhere in the world,” the group writes on their website. “Imagine a laboratory where your experiences and ideas can be examined and exchanged, where you’ll have the opportunity to build on your own knowledge and the knowledge of others, where you may even find new approaches to and input on your methodologies. ”

This first forum is focusing on the “need for a more effective process towards addressing local demand for energy and the global problem of climate change,” according to a press release.

“We have managed to draw interest not only from community groups and NGOs, but also government agencies and the private sector. We look forward to some interesting discussions with such a diverse mix of people,” Wyn adds.

Future goals will be announced tomorrow during the forum’s final day.