Spike in glacier melt across Patagonia since 2000 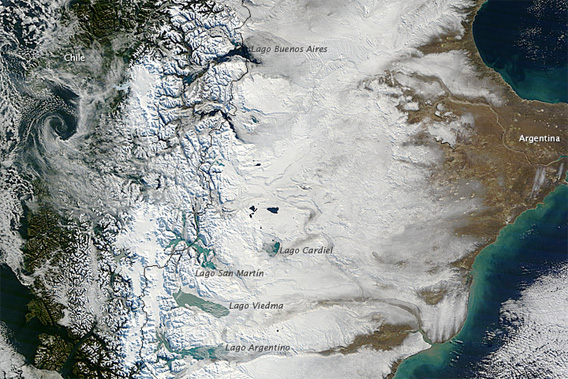 Snow blanketed southern Patagonia in late May 2012. The Moderate Resolution Imaging Spectroradiometer (MODIS) on NASA’s Terra satellite captured this natural-color image on May 30, when snow cover extended from the mountains of Chile eastward across the plains of Argentina. In hues of teal and navy blue, glacial lakes stood out from the snow. Caption and image courtesy of NASA

The rate of glacier melt across Patagonia has accelerated since 2000, reports a new study published in the journal Geophysical Research Letters.

Using NASA satellite data, researchers led by Michael Willis of Cornell University compared recent thinning of the Southern Patagonian Icefield with melt rates since the early 1970s. They found that on average, the Southern Patagonian Icefield glaciers have thinned by about 1.8 meters (5.9 feet) per year since 2000, translating to an annual increase sea level by 0.067 mm. In the three decades prior, these glaciers contributed an average of .042 millimeters per year to sea rise, suggesting a 50 percent increase in the rate of melting.

“Patagonia is kind of a poster child for rapidly changing glacier systems,” said Willis in a statement. “We are characterizing a region that is supplying water to sea level at a big rate, compared to its size.”

“We find some glaciers are stagnant and even that some have advanced slightly but on the whole, retreat and thinning is prevalent. Interestingly, we see thinning occurring up to the highest elevations, where presumably it is coldest.”

Willis added the rate of ice loss is likely to accelerate due to warmer temperatures and increasing amounts of water below glaciers, which facilitate ice flow.

“Warming air temperatures contribute to the thinning at the highest and coldest regions of the ice field,” explained a press release from the American Geophysical Union. “Moreover warmer temperatures mean greater chances that rain, as opposed to snow, will fall
on and around the glaciers. This double threat of warming and more rain may, in turn, change the amount
of water beneath the glaciers. More water means less friction, so the glaciers start to move faster as they
thin, moving even more ice in to the oceans. Rising lakes at the front of the glaciers may also play a part
as they eat away at the icy edges faster, causing the glaciers to retreat even further.”