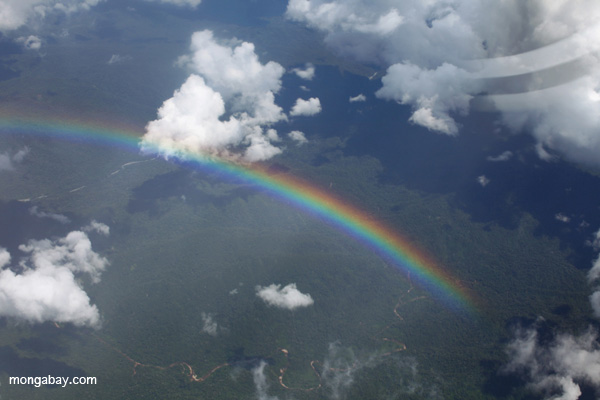 Salt compounds released by fungi and plants in the Amazon rainforest have an important role in the formation of rain clouds, reports research published in the journal Science.

Scientists in recent years have shown that organic compounds released by rainforest vegetation contribute to the formation of aerosol particles that drive rainfall above the Amazon. The new study reveals that potassium salt particles are also involved in the formation of raindrops. A statement from the Max Planck Institute for Chemistry explains:

Until now, it has been assumed that most aerosol particles above the Amazon rainforest only consist of organic material, and are formed through chemical reactions of gas molecules in the atmosphere. Volatile hydrocarbons such as isoprene are released from plants through and consequently transformed through photochemical oxidants into non-volatile organic molecules that adsorb one another, thereby forming aerosol particles.

A research team headed by Meinrat O. Andreae and Ulrich Pöschl at the Max Planck Institute for Chemistry have now discovered that not just organic molecules, but also very fine potassium salt particles participate in the formation of aerosols. These are mainly released from fungi, but also from plants in the rainforest, and serve as condensation nuclei to which the organic molecules can adsorb. Fungi and plants thus have direct influence on the number and properties of aerosol particles in the air and thereby also on the formation and composition of mist, clouds and precipitation in the rainforest.

The results suggest that rainforest plants play an even more complex role in regulating their own rainfall than previously believed.