Over 68,000 birds listed on CITES (Convention on International Trade in Endangered Species of Wild Fauna and Flora) were exported from the Solomon Islands during 2000-2010 according to a recent report by wildlife-monitoring NGO, TRAFFIC. Although the majority of birds were listed as ‘captive-bred,’ the report raises the question of whether these species were not in fact taken from the wild.

“Declaring exported birds as being captive-bred have all the hallmarks of a scam to get around international trade regulations,” said Chris R. Shepherd, Deputy Regional Director of TRAFFIC Southeast Asia and co-author of the new report, in a press release.

Malaysia and Singapore accounted for the vast majority of Solomon Island bird imports and were found to re-export many individuals to countries including Taiwan, Poland and Panama. 54,793 of these birds were native to the Solomon Islands. Of these, 13,692 were declared as wild-caught and 41,101 were declared as captive-bred, reads the new TRAFFIC report.

The native bird species included 18,444 yellow-bibbed lories (Lorius chlorocercus), 15,994 Solomons cockatoos (Cacatua ducorpsii), 8,050 eclectus parrots (Eclectus roratus), 5,803 cardinal lories (Chalcopsitta cardinalis) and 4,957 rainbow lorikeets (Trichoglossus haematodus). Many of the species declared as captive-bred are high maintenance and slow to breed. In fact, the TRAFFIC report states that the likelihood of breeding over 15,000 yellow-bibbed lories and over 10,500 Solomons cockatoos within a ten year period (with peaks of 5,870 and 3,825 individuals in 2004, respectively) is very slim.

The number of birds reportedly captive-bred would suggest that the Solomon Islands has a considerable network of breeding facilities. However local authorities reported to TRAFFIC that no such breeding facilities existed and the only registered bird breeders on the islands used their facilities as holding sites—presumably for the wild-caught birds.

The Solomon Islands also exports non-native bird species that are originally found in neighboring Papua New Guinea and Indonesia. Believed to be in the region of around 13,000 individuals, species include the Critically Endangered yellow-crested cockatoos (Cacatua sulphurea), which is particularly worrying. Birds of Paradise, amongst other threatened species, are also actively exported. No documentation of the export of these animals to the Solomon Islands has been found suggesting that this may be the result of illegal activity. These foreign birds are all reported to be captive-bred yet, as before, no breeding sites have been found. Additionally these birds—and Birds of Paradise in particular—are notoriously difficult to breed in captivity making it even more likely that these birds were taken from the wild.

The report recommends an investigation into captive breeding operations in the Solomon Islands. If it is found that the island nation is indeed in breach of regulations then CITES has the authority to cease all trade of CITES-listed species from the Solomon Islands.

Last month, a CITES meeting took place in Switzerland, during which the captive breeding and ranching issues were discussed. In order to help combat the problem, some recommendations were put forward, including that exporting countries should undertake regular and thorough inspections of captive-breeding and ranching facilities and exporting and (where appropriate) importing countries should routinely and consistently consult scientific authorities regarding permit applications, checklists for facility inspection, and the development of captive breeding databases. Finally, CITES believes that improving the proper use of source codes and their definitions would address several important issues. 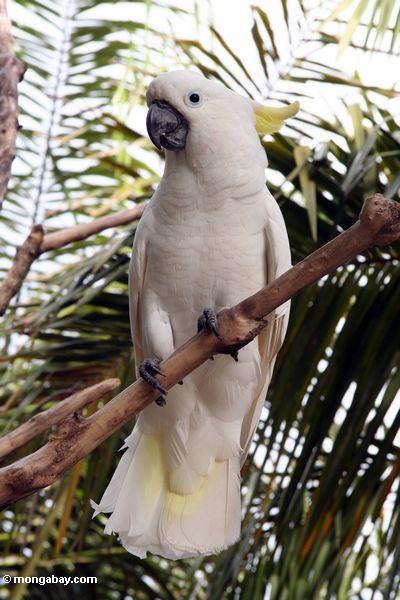 A Yellow-crested Cockatoo (Cacatua sulphurea). Listed as Critically Endangered, these beautiful birds are highly sought after pets. Photo by Rhett A. Butler.

(04/19/2007) University of Florida scientists have discovered a new genus of frogmouth bird in the Solomon Islands. The findings are published in the April edition of Ibis: The International Journal of Avian Science.

(12/17/2009) Tetepare may be one of the last tropical island paradises left on earth. Headhunting and a mysterious illness drove its original inhabitants from the island two hundred years ago, making Tetepare today the largest uninhabited island in the tropical Pacific. The 120 square kilometer island (46 square miles), long untouched by industry or agriculture, is currently threatened by logging interests. However, the island is not without champions: in 2002 descendents of the original inhabitants of Tetepare formed the Tetepare Descendents Association (TDA) to preserve the island. Recently they have teamed up with the Solomon Islands Government and the Solomon Islands Community Conservation Partnership to develop financing through REDD.

(05/19/2009) Last Friday, six nations signed a pledge launching the Coral Triangle Initiative on Coral Reefs, Fisheries and Food Security (CTI-CFF). Indonesia, the Philippines, Timor Leste, Papua New Guinea, Solomon Islands, and Malaysia each agreed to protect the Coral Triangle, a region spanning 1.6 billion acres, half the size of the US.