New research shows that the lowland tapir is nearly extinct in the Atlantic Forest. Photo by: Jeremy Hance.

When the Portuguese first arrived on the shores of what is now Brazil, a massive forest waited for them. Not the Amazon, but the Atlantic Forest, stretching for over 1.2 million kilometers. Here jaguars, the continent’s apex predator, stalked peccaries, while tapirs waded in rivers and giant anteaters unearthed termites mounds. Here, also, the Tupi people numbered around a million people. Now, almost all of this gone: 93 percent of the Atlantic Forest has been converted to agriculture, pasture, and cities, the bulk of it lost since the 1940s. The Tupi people are largely vanished due to slavery and disease, and, according to a new study in the open access journal PLoS ONE, so are many of the forest’s megafauna, from jaguars to giant anteaters.

“We uncovered a staggering process of local extinctions of mid-sized and large mammals,” said co-author Gustavo Canale of the State University of Mato Grosso (UNEMAT) in a press release.

The study found that forest fragments, such as those that make-up the Atlantic Forest today, are not enough to save many mammals from local extinction, raising concern for tropical forests around the world as many are being cleared into fragments in much the same way the Atlantic Forest over the past few centuries.

Examining 18 mammal species across 196 forest fragments in the Atlantic Forest, the researchers found “unprecedented rates of local extinctions,” despite the fact that they purposefully visited the “most intact and best preserved” sites in the region. On average only about 4 target mammals were found out of 18 (around 22 percent) in each forest patch, with some fragments, not surprisingly, performing better than others. None of the nearly two hundred sites contained all 18 mammals. The findings undercut assumptions made by the widely used theory of species-area relationships, which predicted that around 45-80 percent of the mammals would have remained.

Worryingly even some large forest patches with intact canopies had been depleted of the target mammals. Even the biggest fragments contained on average less than eight of the target species.

“You might expect forest fragments with a relatively intact canopy structure to still support high levels of biodiversity,” explains lead author Carlos Peres, of UEA’s School of Environmental Sciences. “Our study demonstrates that this is rarely the case, unless these fragments are strictly protected from hunting pressure.”

Hunting and poaching had decimated many of the mammal species even in habitats where they would thought to be present. In addition, forest fragments suffered from edge effects, such as drying out and wind vulnerability, and an increased likelihood of fires, a rarity in tropical rainforests.

Some mammals are nearly, or entirely, gone for good. The study found no evidence that white-lipped peccaries survived anywhere in the Atlantic Forest, while lowland tapirs, woolly spider monkeys, jaguars, and giant anteaters were each only found in 0.5 to 3 percent of the surveyed forests. Most of the surviving targeted mammals were small, including marmosets, titi monkeys, and nine-banded armadillos.

Many of the once-common species were even absent from human memory, a phenomenon that has become known to scientists as shifting baselines, i.e. where humans rapidly forget what an ecosystem once was.

“Interviews clearly indicated that there was no record in recent memory of these otherwise widespread species in all but a few forest fragments
surveyed,” the researchers write, adding that, “the largest five species were reported by 98 percent of all interviewees to have disappeared from local folklore, and were no longer pursued by subsistence hunters.”

The study did point to a remedy: protected areas. The key to mammal survival in the Atlantic Forest was more related to legal protection than even the size of the fragments with protected areas containing three times as many target species as non-protected areas.

“We therefore recommend the implementation of new strictly protected areas, such as National Parks and Biological Reserves, including forest fragments containing populations of endangered, rare and endemic species, particularly those facing imminent extinctions,” says Canale. Today, less than 2 percent of the Atlantic Forest is under strict protection.

Despite this, the trend in the Atlantic Forest is going in the opposite direction of greater protection and conservation.

“A growing number of reserves are being degraded, downsized, if not entirely degazetted, so holding on to the last remaining large tracts of primary forests will be a crucial part of the conservation mission this century,” explains Peres.

Many of the world’s once great rainforests—from Sumatra to Madagascar and Uganda to Papua New Guinea—are being whittled away in much the same manner as the Atlantic Forest was 50 years ago, when only 3 billion people occupied the planet. And their mammals, from tigers to lemurs, are facing the same onslaughts as the largely vanished jaguars and giant anteaters of the Atlantic Forest.

“Human populations are exploding and very few areas remain untouched by the expanding cornucopia of human impacts,” says Peres. “It is therefore essential to enforce protection in areas that are nominally protected ‘on paper’. The future of tropical forest wildlife depends on it.” 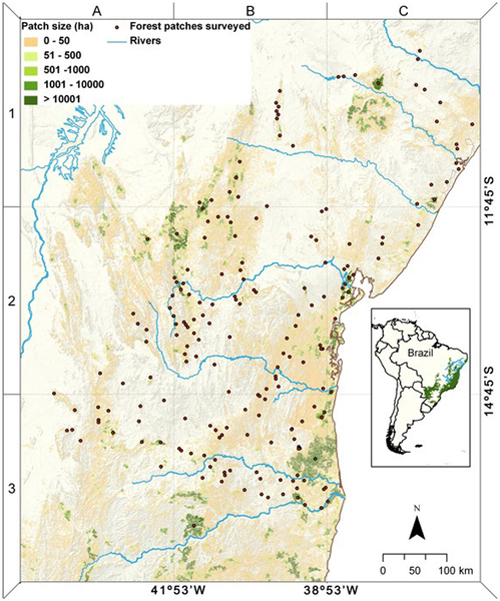 (06/06/2012) Deforestation of Brazil’s Mata Atlântica — a forest ecosystem more threatened than the Amazon rainforest — fell to 133 square kilometers between 2010 and 2011, down about 14.7 percent from the annual average between 2008 and 2010, reports Brazil’s National Institute for Space Research (INPE) and Fundação SOS Mata Atlântica.

(03/19/2012) Scientists have called for the removal of eight invasive primates from Brazil’s imperiled Atlantic Forest in a new study published in mongabay.com’s open access journal Tropical Conservation Society. The researchers fear that the eight alien monkeys could hurt other species due to increased competition, predation, and possible disease.

(09/26/2011) Aggressively expanding sugarcane ethanol is putting Brazil’s nearly-vanished Atlantic Forest at risk, according to an opinion piece in mongabay.com’s open-access journal Tropical Conservation Science. Already down to less than 12 percent of its original extent, the Atlantic Forest—home to over 7,000 species that survive no-where else—is facing a new peril from ethanol, used as an alternative to gasoline and often touted as ‘green’ or ‘environmentally-sustainable’.

(06/17/2010) Brazil has designated an additional 65,070 hectare (161,000 acres) of land to be protected in the Mata Atlantica, or Atlantic Forest. The land is split between four new protected areas and an expansion of a national park.