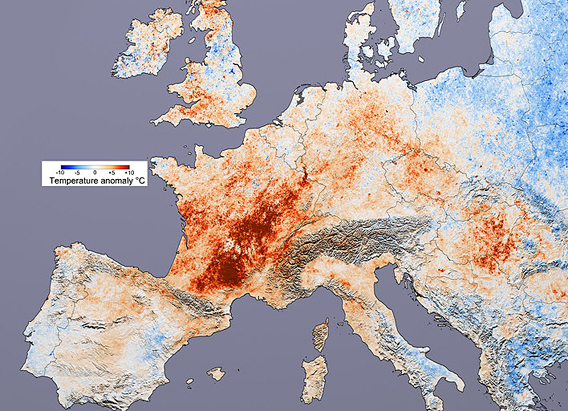 Hitting France especially hard, the Europe 2003 heatwave left tens of thousands of people dead. A new statistical analysis argues that climate change was the cause of this and other extreme summer heat events. Image by: NASA.

A recent rise in deadly, debilitating, and expensive heatwaves was caused by climate change, argues a new statistical analysis published in the Proceedings of the National Academy of Sciences (PNAS). Climatologists found that extreme heatwaves have increased by at least 50 times during the last 30 years. The researchers, including James Hansen of NASA, conclude that climate change is the only explanation for such a statistical jump.

“This is not a climate model or a prediction but actual observations of weather events and temperatures that have happened,” Hansen, a prominent scientist and outspoken climate change activist, wrote in an op-ed in the Washington Post. “Our analysis shows that it is no longer enough to say that global warming will increase the likelihood of extreme weather and to repeat the caveat that no individual weather event can be directly linked to climate change. To the contrary, our analysis shows that, for the extreme hot weather of the recent past, there is virtually no explanation other than climate change.”

Between 1981 and 2010, extreme heatwaves covered 10 percent of the world, according to the paper, which is 50 to 100 times greater than the 0.1 percent to 0.2 percent of the Earth’s surface covered by extreme heat from 1951-1980. The analysis not only finds that extreme heatwaves (defined as over three standard deviations above the base period) have expanded due to a warming world, but that moderate heat (over half of a standard deviation) has more than doubled: jumping from 33 percent to 75 percent. Many climatologists refer to this phenomenon as “loading the climate dice.”

“In a normal climate without global warming, two sides of the die would represent cooler-than-normal weather, two sides would be normal weather, and two sides would be warmer-than-normal weather. Rolling the die again and again, or season after season, you would get an equal variation of weather over time,” Hansen explains in his op-ed. But now he says, climate change has shifted the dice: instead of only two sides being warmer than average, it should be four sides with one of those sides representing extreme heat.

“The climate dice are now loaded to a degree that a perceptive person old enough to remember the climate of 1951–1980 should recognize the existence of climate change, especially in summer,” the scientists write in the PNAS paper. Given their findings, the researchers also argue it is safe to say that recent heatwaves—like last year’s drought in Texas and Oklahoma, Russia’s heatwave and wildfires in 2010, and the European heatwave of 2003—were caused by climate change.

Europe’s heatwave in 2003, which was the continent’s hottest summer since at least 1540, led to 70,000 deaths above the summer average. Likewise, Russia’s 2010 heatwave increased the mortality rate by 56,000, and helped spawn massive wildfires destroying one-fifth of the country’s globally-important wheat crop. Meanwhile, last year’s drought in the Southern U.S. cost the state of Texas, where it was most severe, over $7 billion in damages.

The scientists write that while local weather conditions obviously play a role in all extreme weather events, climate change has become a game-changer.

“It is not uncommon for meteorologists to reject global warming as a cause of these extreme events, offering instead a meteorological explanation. For example, it is said that the Moscow heat wave was caused by an extreme atmospheric ‘blocking’ situation, or the Texas heat wave was caused by La Niña ocean temperature patterns,” the researchers write. “Certainly the locations of extreme anomalies in any given case depend on specific weather patterns. However, blocking patterns and La Niñas have always been common, yet the large areas of extreme warming have come into existence only with large global warming.”

With such findings, Hansen told the Associated Press that the current heatwave and drought across wide-swathes of the U.S. is also likely linked to climate change.

Although bold, the findings of the PNAS paper are by no means alone. Over the past few years, climatologists have increasingly found connections between extreme weather events and climate change. A recent study found that warming in the Indian and Pacific oceans likely increased drought conditions across East Africa, while another found that climate change had increased the odds of the Russian heatwave by 20 times. But it was not just summer temperatures: another study found that climate change made an abnormally warm November in Britain last year 60 times more likely.

Experts say the only way to combat climate change is to aggressively cut global carbon emissions, which hit record levels last year. Currently, carbon is emitted primarily by burning fossil fuels, such as coal, oil and natural gas. In addition, the destruction of forests, peatlands, mangroves, and other ecosystems release stored carbon into the atmosphere, worsening the situation. While most of the world’s nations have agreed to tackle climate change, to date actions have done little to slow emissions growth. At current rates emissions are projected to double from pre-industrial levels by 2050.