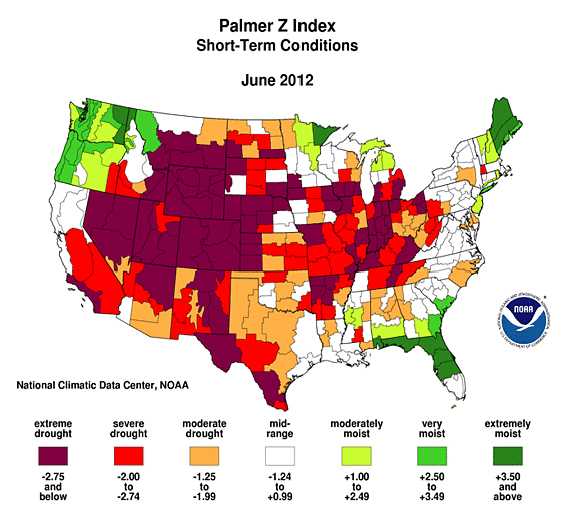 The U.S. is suffering drought levels not seen in over 50 years—and drawing comparisons to the Dust Bowl—with 56 percent of the contiguous U.S. in moderate to extreme drought. Some experts fear that the drought, and resulting hikes in food prices, could propel another global food crisis like those seen in 2008 and 2010.

While not as severe as the Dust Bowl yet, the drought has put the U.S. government on alarm. Unprecedentedly, the government has declared a third of the U.S. counties covering 26 states federal disaster areas due to the drought. To make matters worse, drought conditions are not expected to be relieved anytime soon. The drought also comes as the U.S. has experienced its warmest 12 consecutive months on record, including an unprecedented Spring heatwave and another rare end-of-June heatwave.

Not surprisingly then corn and other crops are wilting in the field. The U.S. Department of Agriculture recently cut their forecast of this year’s corn crop by 12 percent, and some expect further cuts. The U.S. is the world’s largest exporter of corn, which is largely fed to livestock or used to produce corn meal, corn syrup and ethanol biofuels. Last week corn prices hit a record high of $8.24.

“What happens to the U.S, supply has an immense impact around the world. If the price of corn rises high enough, it also pulls up the price of wheat,” Robert Thompson with the Chicago Council of Global Affairs told the Guardian. Wheat is one of the world’s most important food staples.

And the U.S. isn’t alone: floods in the U.K. and Russia have hurt wheat crops while droughts in South America have taken a toll on soy. Wheat prices have not yet hit levels like those seen during past food crisis, but have still jumped 55 percent in the last month.

While food prices are determined by many factors, including environmental and social, some are pointing their fingers at climate change for increasing and worsening extreme weather that is decimating crops. This is not without evidence: a recent study found that climate change had increased the probability of Texas’ 2011 drought by 20 times. Other studies have illustrated intriguing, but disputed, links between global warming and the East African famine in 2011 and Russia’s heatwave, drought, and fires in 2010.

“This is what global warming looks like at the regional or personal level,” Jonathan Overpeck, climatologist with the University of Arizona, recently told the Associated Press in response the U.S. extremes. “The extra heat increases the odds of worse heat waves, droughts, storms and wildfire. This is certainly what I and many other climate scientists have been warning about.”