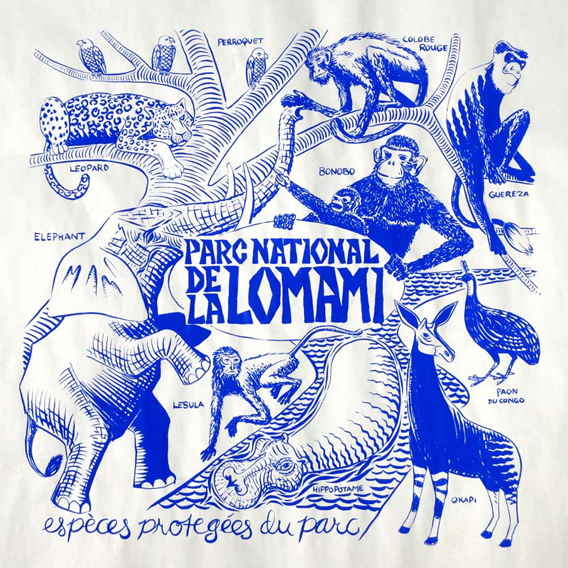 Bandana by Roger Peet to promote conservation and wildlife identification in the Democratic Republic of the Congo (DRC). Click to enlarge.

American artist, Roger Peet—a member of the art cooperative, Justseeds, and known for his print images of vanishing species—is headed off to the Democratic Republic of the Congo (DRC) to help survey a new protected area, Lomami National Park. With him, he’ll be bringing 400 bandanas sporting beautifully-crafted images of the park’s endangered fauna. Peet hopes the bandanas, which he’ll be handing out freely to locals, will not only create support and awareness for the fledgling park, but also help local people recognize threatened species.

Given that the DRC is one of the world’s most impoverished countries, Peet says that the bandanas, which have a number of practical applications, will be an important way for people to promote conservation and raise pride in their rich and splendid wildlife. Mongabay.com recently spoke to Peet, who has started a Kickstarter campaign to fund the project, about the innovative idea of using bandanas as a conservation tool and his up-coming trip to the DRC.

Mongabay: Tell us about your conservation project?

Roger Peet: This is a project to create a useful wildlife identification tool for a new national park in the Democratic Republic of Congo. What I’m doing is making a detailed pen-and-ink drawing of all of the protected species that inhabit the park, and screen-printing that image on a big pile of brightly colored bandanas.

Mongabay: Why a bandana?

Roger Peet: Think of the Smokey the Bear posters that the National Park Service produces in the US. A bandana is very different from a poster. All you can do with a poster is hang it on your wall, but a bandana has many uses—you can wear it, you can wrap your child in it, you can carry something in it, and when you’ve washed it you can hang it out on a line and what’s printed on it can be seen by whomever passes by. As a conduit for information it’s durable and appropriate to a highly rural context. I aim to make it beautiful as well.

Mongabay: How do you envision these bandanas promoting conservation in the Democratic Republic of Congo?

Roger Peet: I’m going to be handing them out to the people who live in the region around the new Lomami National Park. It’s my hope that they’ll help to promote the idea of the park among the people who live near it, and to serve as reminders that certain species, some of which have been hunted for food, are protected within the confines of the park. Since the bandanas are designed to be objects for everyday use, I’m hoping that the message they carry will have more staying power and a greater range of transmission than something less functional.

Mongabay: You’ll be traveling soon to rainforest in the DRC. What will you be doing there?

Roger Peet: I’ll be volunteering with a team of Congolese and American scientists, coordinated by Drs. John and Terese Hart. We’ll be surveying and censusing species within the park, and within a buffer zone around it, where hunting will still be permitted. We’ll also be monitoring poaching activity in the park and the surrounding area. I’m hoping to do a lot of sketching and rough printmaking of the park’s biodiversity. While I am an enthusiast of all things wild, I’m a bit of a bug nerd so I’m pretty excited about all the new insects and other arthropods I hope to see.

Mongabay: Will you tell us about Lomami National Park?

Roger Peet: The park is located in the east of DR Congo, in Maniema province near the city of Kindu. It incorporates a large area of lowland rainforest traversed by three rivers, the Lomami, the Tshuapa, and the Lualaba. Eastern DR Congo has seen a lot of deforestation, habitat destruction and biodiversity loss over the past forty years, and the Lomami National Park area is one of a dwindling number of regions where the ravages of war and of the mining, timber and commercial bushmeat sectors haven’t been so acutely felt. It’s an amazing forest, home to a dizzying array of species, including the bonobo chimpanzee, the small, promiscuous ape that’s one of our closest relatives.

Something that I think is really important about the park is how it’s being established—it’s being created from the ground up, with the full participation of the people who live near it. In a reversal of how these things normally seem to happen, it’s the people who live near to the park that have been the first to agree to its creation, and the process of approval has moved up the chain of authority from there. I think this is a really good way to work towards a commitment to the integrity of the park. If the people affected by its implementation are a part of the process, they are more likely to feel a sense of ownership and pride about a place that is one of the jewels of the world.

Mongabay: How can people help?

Roger Peet: Donate to my Kickstarter campaign! I’m funding my participation in this project entirely out of pocket, and every donation helps. I’m offering the bandanas as rewards for the Kickstarter campaign, along with a bunch of other art—and conservation—related items. People should also have a look at the blog run by the Harts that details their work on the park project and has a wealth of information and great photos.