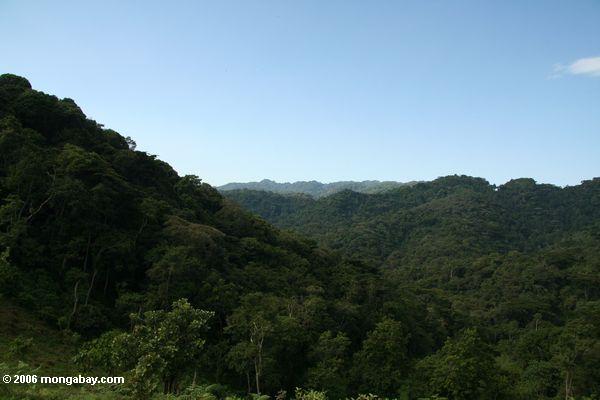 Forest cover in East Africa has dropped by 9.3 percent from 2001-2009, according to a new paper published in the open-access journal PLoS ONE. Looking at 12 countries in the region, the scientists found that, worryingly, forests were particularly hard hit near protected areas. Usually thought of as a region of vast savannas, such as the Serengeti, East Africa is also home to incredibly biodiverse tropical forests, including coastal forests, rich montane forests, and the eastern portion of the Congo Rainforest.

However, the study finds that protected areas do not always live up to conservation goals. According to the study, 46 percent of East Africa’s National Parks lost forest cover in the last decades. Worse still, 50 percent of Nature Reserves (losing a cumulative 5.3 percent of forest cover), 61 percent of Forest Reserves (-3.5 percent), and 92 percent of Game Parks (-24.4 percent) lost forests. Just outside of protected areas, forests were particularly vulnerable, with buffer zones losing forest at an even faster clip.

The study also found some evidence for leakage — that protecting forests in parks simply lead to increased deforestation outside protected boundaries — but cautions that more research is needed.

Booming populations and the ease of accessing a particular were the two main drivers for deforestation in the region, according to the study. Local people clear forests for agriculture, grazing land, and for charcoal to burn. Roads are bringing more people to the edges of protected areas, where, in some cases, forest loss was more severe than national rates. Commercial logging, both legal and illegal, is also taking a toll.

The best way to mitigate deforestation in the region is not to keep locals out however, says the study. In fact, current data “suggests that involving local communities in forest management improves forest conservation outcomes,” the scientists write. They point to Kenya’s Mukogodo Forest Reserve and Tanzania’s Vumari Forest Reserve as innovative conservation areas that allow community participation and resource collection, and note that Tanzania’s Participatory Forest Management (PFM) program is a model worth emulating.

“[PFM] increases decision-making powers of villages on the use of forest resources and empowers them to declare, own and manage their forests,” the authors write.

Deforestation was most severe in Rwanda and Uganda, but South Sudan actually saw forest cover increase during the time period in question.

Featured video: Honoring Wangari Maathai, who would have been 72 yesterday

(04/02/2012) The indomitable Wangari Maathai would have turned 72 yesterday, April 1st, 2012. Maathai, who was the first African woman and the first environmentalist to win a Nobel Peace Prize (in 2004), passed away last September.

(03/12/2012) Africa Wildlife Foundation (AWF), the conservation nonprofit based in Washington, DC, is facing a lawsuit by Kenya’s Samburu tribe over alleged unlawful evictions. The hearing, originally scheduled for January 23, has now been postponed to later this month. The dispute is over an area of land in Laikipia District in Kenya, one of Africa’s most wildlife rich areas. Until recently, it was also the homeland of some 2,000 semi nomadic members of the Samburu tribe. At least according to the Samburu.