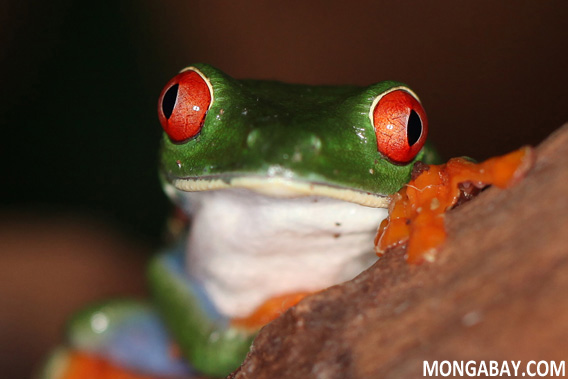 The number of amphibians described by scientists now exceeds 7,000, or roughly 3,000 more than were known just 25 years ago, report researchers in Berkeley.

David Wake, an emeritus biology professor at the University of California, this week announced the 7,000th amphibian cataloged on AmphibiaWeb, a project which since 2000 has sought to document every one of Earth’s living frogs, salamanders, newts, and caecilians. The 3,000 ‘new’ species means that scientists have described a previously unknown amphibian every two-and-a-half days since 1987. And the rate of new species descriptions may be accelerating: 100 species have been described so far in 2012.

But the discoveries mask bad news: global amphibian populations are in sharp decline due to the effects of climate change, habitat destruction, pollution, invasive species, overharvesting as food and for the pet trade, and the spread of chytridiomycosis, a deadly fungal disease. The IUCN Red List estimates that more than 40 percent of amphibians are at risk, while more than 150 species are known to have gone extinct since the early 1980s.

AmphibiaWeb documents the known status of each and every species. Beyond photos, maps, and information, the site also collects audio clips of frog calls. Wake said AmphibiaWeb had become the global authority for amphibian information.

“We are the place for accurate, vetted information on amphibians,” he said in a statement, noting the site is queried 15,000 and 20,000 times per day. 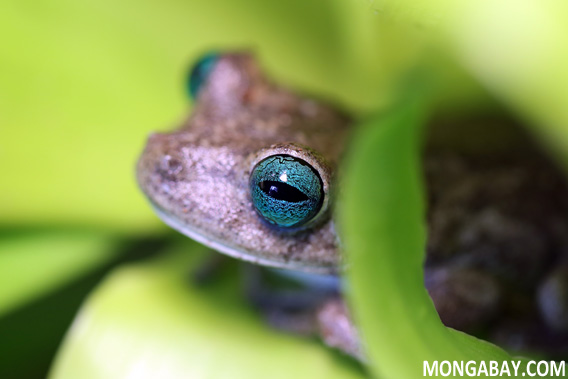 Frog photos for Save the Frogs Day

(04/28/2012) Today is Save the Frogs Day, a global event that aims to raise awareness on the plight of amphibians, which are increasingly endangered by climate change, habitat loss and degradation, pollution, invasive species, overexploitation, and the outbreak of a deadly fungal disease. In recognition of Save the Frogs Day, there are dozens of activities occurring around the world.

(12/18/2011) Bryan Stuart’s mission as a curator of amphibians and reptiles at the North Carolina Museum of Natural Sciences is to understand the diversity of life on earth. For that, he documents what species occur where and why. He’s particularly attracted to areas where there’s a dearth of knowledge, like Laos, Cambodia, Vietnam and Gabon, and so far has discovered 27 species unknown previously to scientists: three species of snakes, two types of salamanders, and 22 kinds of frogs.