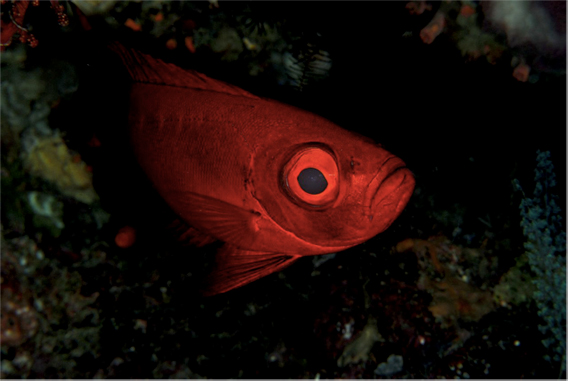 Large-eyed nocturnal fish, such as this moontail bullseye, are highly specialized for operating in the dark. Part of the reason they may have adapted to nighttime living was to avoid predators that are active during the day. Photo by: J. Huang.

Nocturnal fish—which sport big eyes for improved night vision—are taking back the day in the coral reefs of the Tabuaeran Atoll, according to a new study in the open-access journal PLoS ONE. Overfishing has plundered the Pacific atoll of many of its notable predators, including sharks and barracudas, causing ripple effects through the ecosystem. One of these emerging changes appears to be that with less fear of being eaten, nocturnal fish are increasingly venturing out during the day.

“We found that on reefs where daytime active predators had been heavily fished, nocturnal prey fish species were more abundant during the day. This increase in abundance was most pronounced for fish species that had the largest eyes (relative to their body size),” lead author Douglas McCauley with Berkley’s Department of Environmental Science, Policy, and Management told mongabay.com.

McCauley and his colleagues were most shocked by how quickly the nocturnal fish changed their behavior, since large-scale fishing didn’t start in the Tabuaeran Atoll until the 1980s.

“It is really surprising to see this change in the ecology of these nocturnal fish take hold in only 30 years,” says McCauley. “This is a very short amount of time relative to long evolutionary time that it takes for these nocturnal/diurnal divisions to originally set up.”

The scientists suspected that the behavioral changes at Tabuaeran was due to the precipitous decline in predators, but in order to put that theory to the test they also traveled to the Palmyra Atoll: a protected and remote atoll where marine predators remain naturally abundant. Not surprisingly, with so many daytime predators, nocturnal fish in Palmyra still stuck closely to the dark.

McCauley says the switch from nocturnal to diurnal, which he calls “time pollution,” could have many impacts on Tabuaeran’s coral reef ecosystem.

“The patterns by which animals divide up time on reefs (and other ecosystems for that matter) are believed to be relatively static. If these divisions start to break down it could have some very important ecological consequences,” McCauley explains. “On our study reefs, for example, if these nocturnal fish that are becoming more abundant are feeding actively during the day, they may well put significant competitive pressure on diurnal fish that feed on the same food resources that they do.”

The study is not the first time scientists have recorded animals switching nocturnal habits for diurnal says McCauley.

“In New Zealand it has been noted that nocturnal lobster that are reared in environments that lack predators show unusual increases in activity during the day. Certain aquatic insects that use river currents to transport themselves downstream only do this at night in rivers where diurnally active fish predators are found, but they will move during both day and night in the absence of these predators. It seems that increases (as well as decreases) in predation risk can also perturb patterns of nocturnality. Researchers in the UK described how a typically nocturnal rodent switched to diurnal behavior to avoid predation from nocturnal foxes. ”

However, the study of Tabuaeran’s nocturnal fish is noteworthy because it is the first record of an entire group of night-adapted animals, as opposed to just a single species, making such a shift.

“We have learned a lot about how environmental change affects how animals use space and resources – but not yet enough about how they use time,” concludes McCauley. “I think it is incorrect to believe that ecological utilization of time will be any less mutable than of these other facets of plant and animal ecology that we have already very clearly disrupted.” 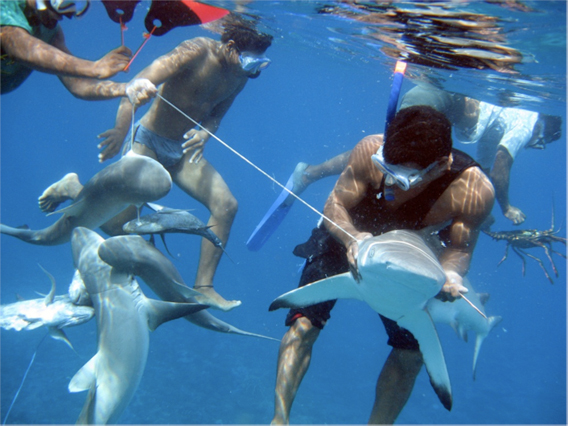 The removal of large coral reef predators, like the reef sharks being hunted here, may be making it safe for nocturnal prey to start utilizing the day. Photo by: D. McCauley. 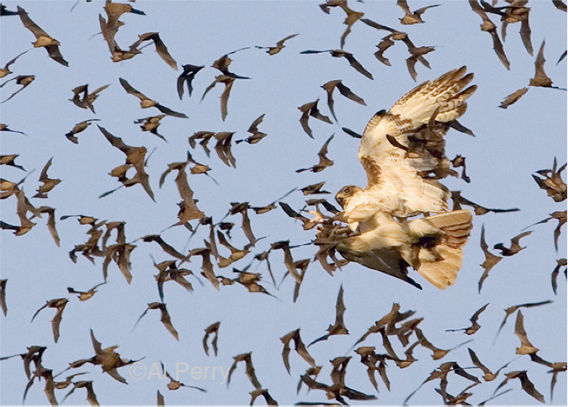 Many nocturnal species, including these Brazilian free-tailed bats, are believed to have adopted a nocturnal way of life to avoid being eaten by day-time active predators. Photo by: Alperry.com.

(05/03/2012) Polar bears (Ursus maritimus) are capable of swimming incredible distances, according to a new study published in Zoology, which recorded polar bears regularly swimming over 30 miles (48 kilometers) and, in one case, as far as 220 miles (354 kilometers). The researchers believe the ability of polar bears to tackle such long-distance swims may help them survive as seasonal sea ice vanishes due to climate change.