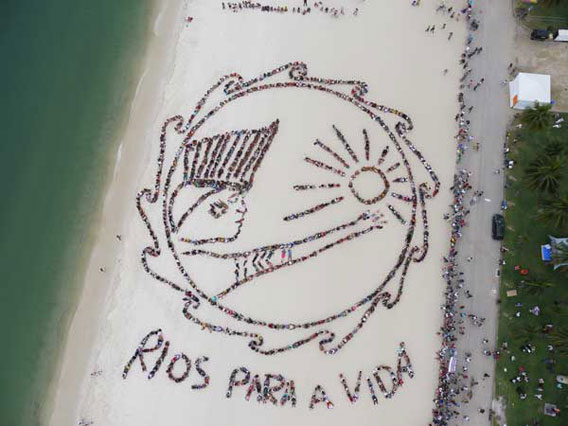 The image depicted a first nations member reaching toward the sun and included text reading “Rios para a vida” (“Rivers for life”). Organizers say the display “symbolized the important role of indigenous knowledge and a strong preference for meeting our collective energy needs through renewable sources like solar power”.

“Rivers should be dedicated to supporting the life of the millions of humans who depend on them and … should remain undammed,” stated a press release issued by Amazon Watch, Articulation of Brazilian Indigenous Peoples, the Global Campaign for Climate Action, and the Rainforest Action Network.

The action especially targeted the Belo Monte dam, which has become a sore point for Brazil as it hosts the Rio+20 Earth Summit. Belo Monte will flood tens of thousands of hectares of rainforest, displacing thousands of people and blocking important fish migration routes, potentially disrupting livelihoods of large numbers of river-dependent communities.

“We want to tell the world that the rivers, people and the planet need to be saved. The message of the banner is that we can live more sustainably, respecting the Earth’s people and without destroying its natural resources,” said indigenous leader Sheyla Juruna in a statement. Juruna’s community may be forced to move when the dam becomes operational.

Brazil intends to build some 60 hydroelectric projects in the Amazon region in coming decades. The government says the dams represent a source of clean, renewable energy, but critics maintain the damage they cause outweigh the benefits. Tropical dams emit large amounts of carbon in the form of methane, according to scientists.