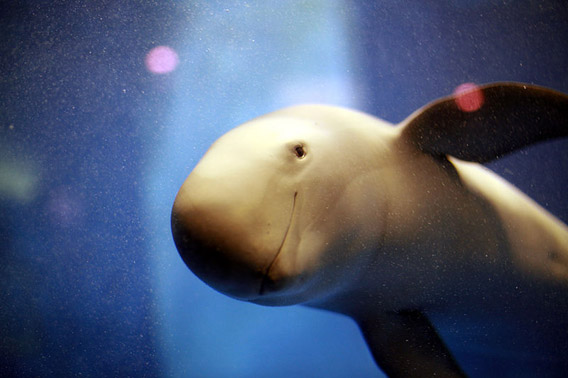 There are two subspecies of the finless porpoise, one is found in the Yangtze River, the other in Japan, Taiwan, and South Korea. This individual is the latter and was photographed in a Japanese aquarium. Photo by: Kenichi Nobusue.

Six years after the Yangtze river dolphin (Lipotes vexillifer), or baiji, was declared “functionally extinct” by scientists, another marine mammal appears on the edge of extinction in China’s hugely degraded Yangtze River. In less than two months, 32 Yangtze finless porpoises (Neophocaena asiaeorientalis asiaeorientalis), a subspecies of the finless porpoise, have been dead found in Dongting and Poyang Lakes in the Yangtze, reports the World Wide Fund for Nature (WWF).

The porpoises are suffering from many of the same impacts that pushed the baiji to extinction: illegal electrofishing, strikes by boat propellors, poisons, and possibly pollution and food shortages from lower water levels linked by officials to climate change. Autopsies show that at least two of the animals were killed by electrofishing and boat propellers.

“This tragedy shows that Yangtze finless porpoise is facing enormous challenges,” Lei Gang, head of WWF China’s Central Yangtze program, said in a press release. “The porpoise deaths illustrates that without effective measures to fundamentally reverse the trend of ecological deterioration, future of the incredible creature is far from certain. We have to act immediately.”

Researchers believe that around 1,000 Yangtze finless porpoises survive in the river with the population in dramatic decline. Currently, the IUCN Red List is evaluating the subspecies to see if the situation warrants classifying the population as Critically Endangered.

Breakneck development, including a series of dams, with little environmental regard has left the ecology of the Yangtze River in shambles. Aside from the baiji’s extinction, many of the river’s key species are vanishing. The Chinese paddlefish (Psephurus gladius), arguably the world’s biggest freshwater fish, is listed as Critically Endangered with only two fish confirmed since 2002. Scientists fear the fish may be soon gone for good, if not already, after a 2009 survey couldn’t find a single fish. In addition the Chinese alligator (Alligator sinensis), the Yangtze sturgeon (Acipenser dabryanus), and the Yangtze soft-shell turtle (Rafetus swinhoei) are all listed as Critically Endangered.

Still, a controversial new hydroelectric project, the Xiaonanhai Dam, is moving ahead despite concerns that it will finish off a number of the river’s endangered fish, many found no-where else in the world. .

The looming mass extinction of the Yangtze River’s key species and widespread environmental degradation has left fishermen bereft of livelihoods on the once plentiful river. A report in 2007 by China’s State Environmental Protection Administration (SEPA) found that 30 percent of the Yangtze river’s tributaries are “seriously polluted” and 600 kilometers of the river is in “critical condition”. Such degradation has lessened the river’s annual fish harvest 77 percent from the 1950s to the 1990s. Pessimistically, the SEPA report called the damage to the Yangtze River “largely irreversible.”

Despite such challenges, WWF and local Chinese authorities hope it’s not too late to save the Yangtze finless porpoise. The local government is working on a plan to better regulate fishing and traffic in the porpoise’s habitat, meanwhile conservationists are also mulling a plan to move some of the porpoises to a more secure ecosystem. 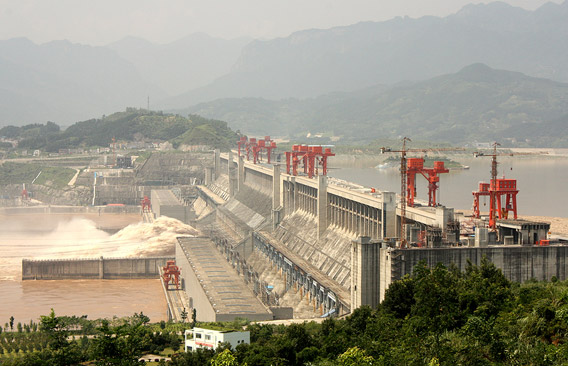 Three Gorges Dam. The hugely controversial dam was finished in 2006 and has further degraded the Yangtze River’s ecology. Photo by: Bigstock.

(06/22/2009) Eight Chinese environmentalists and scientists have composed a letter warning that a new dam under consideration for the Yangtze River could lead to the extinction of several endangered species. The letter contends that Xiaonanhia Dam, which would be 30 kilometers upstream from the city of Chongqing, will negatively impact the river’s only fish reserve. Spanning 400 kilometers in the upper Yangtze, the reserve is home to 180 fish species, including the Endangered Chinese sturgeon, and the Critically Endangered Chinese paddlefish, as well as the finless porpoise.

The news of extinction: western media’s response to the demise of the Baiji

(04/01/2007) The news came and went with an alacrity that I found alarming, almost jolting. I waited for weeks, faithfully; I could not believe that the initial announcement would be followed by nothing but silence on the issue, no rationalizations, no opinions, no discussions, no outpourings of grief. Just silence.

(12/18/2006) Chinese state media reports that scientists will continue to search for the baiji dolphin even after a 38-day search failed to produce any evidence of its existence in the Yangtze River.

Goodbye to the Baiji

(12/14/2006) After a short illness spurred by pollution, overfishing, boat traffic, and obstructions like dams, the Baiji was declared ‘functionally extinct’ last night. As a species, the river dolphin found only in China’s Yangtze River was 20 million years. The Baiji is survived by other river dolphins, all themselves threatened, in the Ganges, Indus, Amazon, Orinoco, and La Plata rivers. No memorial service will be held.