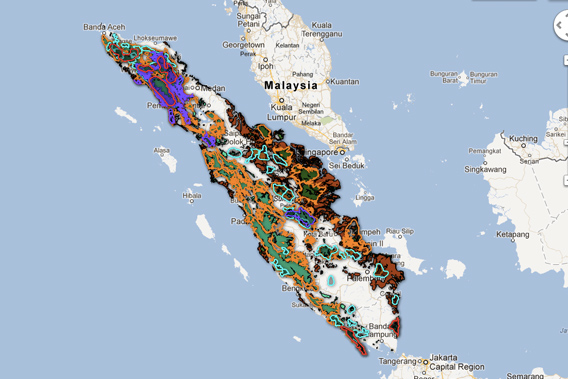 The new Sumatra map. Click image to visit the interactive version of the map.

The World Wildlife Fund (WWF) and a coalition of Indonesian environmental groups known as Eyes on the Forest have released a new Google Earth-based tool (maps.eyesontheforest.or.id)that maps forests, land use, carbon stocks, and biodiversity across the Indonesian island of Sumatra.

The project is based on a database compiled by experts working on the ground in Sumatra. It aims to boost transparency around land use in Sumatra, which has lost roughly half of its forests since 1985 due to agricultural expansion, mining, pulp and paper development, and oil palm plantations. Forest loss in Sumatra has put a number of charismatic animal species 𔃐 elephants, rhinos, tigers and orangutans — at risk and released massive amounts of carbon into the atmosphere.

“This project is a step forward for Eyes on the Forest as it is a powerful tool to open windows to the world about the devastating destruction happening to forests, particularly on Sumatra Island,” said Muslim Rasyid, Chairman of Jikalahari, a member of the Eyes on the Forest coalition. “We hope that Google will keep updating its satellite imagery library so the world can see the facts of the devastating destruction on Sumatra, who is doing it, and where those forest products end up. Furthermore, we can show this map to decision makers and urge them to protect the remaining natural forests of Sumatra.” 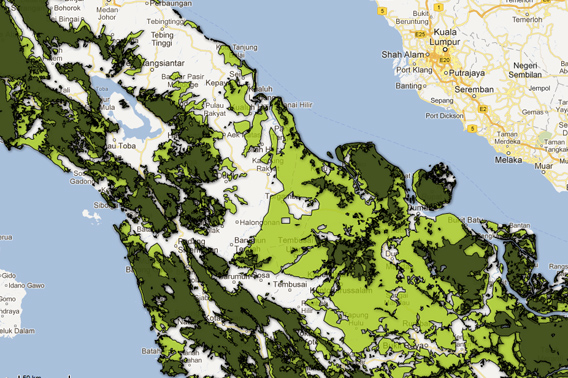 Close-up on the map. Dark green shows 2009 forest cover, while light green reflects deforestation since 1985. Click image to visit the interactive version of the map.

(04/18/2012) NASA researchers have released a Google Earth version of a map showing the height of the world’s forests.

(03/31/2009) Despite many years of research in conservation biology, precise maps of tropical deforestation that document the global spatial extent of tropical forests destruction are generally not available outside of the scientific community, says David Gaveau a researcher from Durrell Institute of Conservation and Ecology (DICE) points out. For nearly seven years, Gaveau has been documenting forest destruction on the entire island of Sumatra since early 1970s using satellite technology, and he has found the way to make his full-resolution maps and scientific results public using Google Earth.