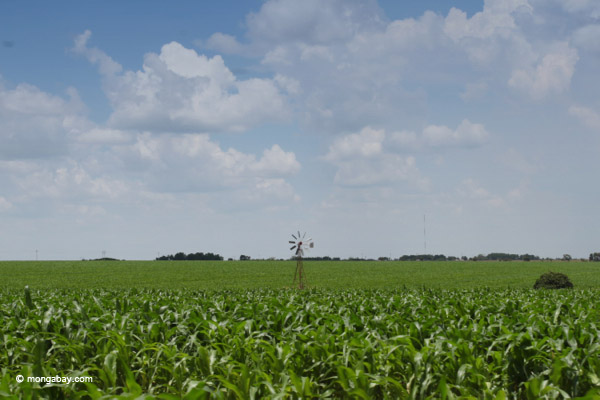 Corn growing in Colombia. Photo by: Rhett A. Butler.

In general, industrial agriculture beats organic farming in yields, according to a comprehensive new study in Nature. The study adds new data to the sometimes heated debate of organic versus conventional farming. Proponents of organic farming argue that these practices are environmentally friendly, sustainable over the long-term, and provide a number of social goods. However, critics argue that organic farming requires more land, thereby increasing global deforestation, which offsets any other environmental benefits of organic food production. At stake is whether organic or conventional is capable of feeding the world’s seven billion people (and rising), including increasing demand for energy-intensive foods like meat in the developing world.

After weeding out problematic research on organic versus conventional agricultural, researchers with the University of Minnesota and McGill University looked at 66 studies on 34 different crops. They found that conventional farming currently beats organic agriculture in yields by 25 percent. However, that simple statistic does not capture the full picture: yields varied widely between types of crops and growing methods.

“For some crops, like many fruits and some legumes (e.g., chickpeas or beans), organic farms nearly match the yield performance of their conventional counterparts, co-author Jonathan Foley, director of the Institute on the Environment, explained to mongabay.com. For example, when looking at rain-fed legumes, the study found that organic yields were only 5 percent behind conventional, and organic fruits were just 3 percent behind.

“But for other crops, like our major cereals and grains, the conventional farms currently have a big yield advantage,” Foley continues, “and that’s a big problem, since grains are a fundamental building block of the human diet.”

This didn’t meant there wasn’t room for improvement in many organic food systems. For example, the authors write that when nitrogen was added to organic fields, yields rose significantly. They note that depending on manure and compost for nitrogen in organic farming simply proved too “slow” for some crops. A lack of phosphorous in certain soils may also hamper organic production in some cases.

“More work is needed, and fortunately, I think it might be possible to make big gains in yield with organic-style approaches,” says Foley, who emphasizes that none of the study’s three authors are “anti-organic,” but all are “big fans of organic food in our households.”

Still, Foley says as a scientist they have a duty to follow the data, and “the science shows us that organic has much work to do to compete with the yields of conventional grains.” The study in Nature focused solely on yields, but when a consumer decides between purchasing organic or conventional produce at the supermarket they likely think about much more than yields: local environmental benefits, pollution, taste, nutrition, and, of course, price. The researchers are quick to note that even if organic systems lag in yields, they provide other benefits.

“Organic agriculture often excels at being more sustainable than many of the conventional techniques used today. As a friend of mine put it, ‘Organic farmers farm, while industrial farmers mine.’ It’s hard to ignore the environmental and sustainability problems with conventional agriculture, whether they are linked to chemical inputs, fertilizers use, water pollution, or water consumption,” Foley says.

While conventional agriculture might produce higher yields in comparable fields, the practice may still hurt food production down stream, so to speak.

For example, massive influxes of nutrients and waste from industrial agriculture into the oceans has resulted in marine dead zones worldwide, essentially starving some marine ecosystems of oxygen. Such dead zones have cut into global and local fisheries, which provide important sources of protein, especially to many of the world’s poor. The same problem has been seen in freshwater ecosystems as well.

Pesticides are used to increase yields by staving off agricultural pests, but their use may also cause food production losses elsewhere. Several recent studies have linked neonicotinoid pesticides to the collapse of bee populations in the U.S. and Europe. As hugely important pollinators, bees provide essential pollination services to many farmers, not to mention honey production. Less bees means less of some crops.

Finally, in a world that climatologists say is already experiencing the impacts of global warming, such as worsening droughts and heatwaves, the dependence of industrial farming on fossil fuels and high water consumption is likely to become increasingly problematic.

“From a broader perspective, I would argue that organic systems have many additional benefits—but that doesn’t mean we can ignore the yield differences,” notes Foley.

The debate over how best to farm has real world implications, as agricultural systems are already over-stretched. According to the UN around 800 million people globally (11 percent of the population) do not have enough to eat, while food prices remain perilously high for many of the world’s poorest. In the meantime, global population continues to grow and is projected to go over 9 billion people by 2050. Just as alarming, demand for meat, dairy, and vegetable oils is rising in developing world. Given these issues, some environmentalists argue the real key is to encourage people worldwide to waste less food, eat less energy-intensive food, and finally tackle global population growth.

“Maybe people are asking the wrong question,” lead author Navin Ramankutty, geography professor at McGill University, says in a press release. “Instead of asking if food is organically grown, maybe we should be asking if it’s sustainably grown.” Oil palm nursery and processing facility in Sumatra. According to Foley: ‘Organic farmers farm, while industrial farmers mine.’ The paper argues a mix of both may be needed to feed the world. Photo by: Rhett A. Butler.

In the paper, the authors argue it may be time to move beyond the polarizing debate of organic versus conventional farming, and begin to employ smart farming systems that employ the best of both.

“To achieve sustainable food security we will probably need many different techniques—including organic, conventional, and possible ‘hybrid’ systems—to produce more food at affordable prices, ensure livelihoods for farmers, and reduce the environmental costs of agriculture,” the researchers write. Of course, that would require both sides of the debate to move from entrenched positions, often exacerbated by industries focused on profit and NGOs for whom conventional techniques are anathema.

Foley says one way to encourage a middle way would be setting up a new food production certification system.

“Maybe we could use something like a LEED certification for food, where you get ‘points’ for contributions to these different positive outcomes? Then food can be labelled as ‘Sustainable Silver’ or ‘Gold’. That would be a big step in the right direction.”

Farms in the sky, an interview with Dickson Despommier

(10/12/2010) To solve today’s environmental crises—climate change, deforestation, mass extinction, and marine degradation—while feeding a growing population (on its way to 9 billion) will require not only thinking outside the box, but a “new box altogether” according to Dr. Dickson Despommier, author of the new book, The Vertical Farm. Exciting policy-makers and environmentalists, Despommier’s bold idea for skyscrapers devoted to agriculture is certainly thinking outside the box.

(11/08/2010) Strawberry plants grown on commercial organic farms yield higher-quality fruit and have healthier soil than those grown conventionally, according to a study published on 1 September in the journal PLoS One. The research suggests that sustainable farming practices can produce nutritious fruit, if farmers manage soil and its beneficial microbes properly. This is among the most comprehensive studies to investigate how conventional and organic farming methods affect both fruit and soil quality.

Could agroforestry solve the biodiversity crisis and address poverty?, an interview with Shonil Bhagwat

(09/24/2009) With the world facing a variety of crises: climate change, food shortages, extreme poverty, and biodiversity loss, researchers are looking at ways to address more than one issue at once by revolutionizing sectors of society. One of the ideas is a transformation of agricultural practices from intensive chemical-dependent crops to mixing agriculture and forest, while relying on organic methods. The latter is known as agroforestry or land sharing—balancing the crop yields with biodiversity. Shonil Bhagwat, Director of MSc in Biodiversity, Conservation and Management at the School of Geography and the Environment, Oxford, believes this philosophy could help the world tackle some of its biggest problems.

(02/05/2009) Embracing more sustainable farming methods is the only way for the world’s farmers to grow enough food to meet the demands of a growing population and respond to climate change, the top crop expert with the United Nations Food and Agriculture Organization (FAO) said today.