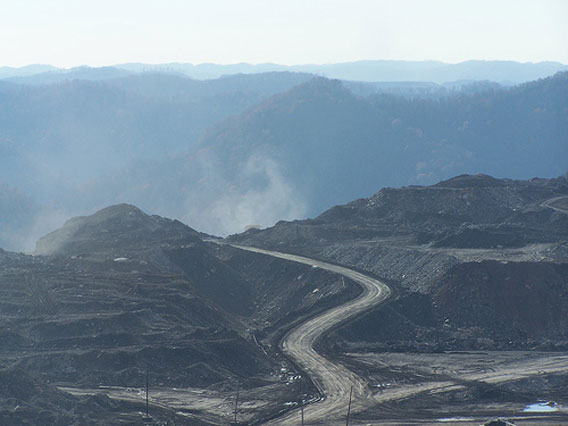 Environmental degradation can have major impacts on a community’s quality of life and a new interactive map of mountaintop mining for coal in the U.S. makes this abundantly clear: based on 21 scientific studies, the map highlights how communities near mountaintop mining have lower life expectancy, higher birth defects, worsening poverty, and are more likely to suffer from cancer, as well as heart and respiratory disease. Created by the non-profit Appalachian Voices and posted on ilovemountains.org, the map show that most communities near mountaintop removal sites are in the bottom 1 percent for overall well-bring in the U.S.

Mountain top mining begins by clear-cutting forests then employing explosives to destroy mountaintops to access the coal beneath. The resulting waste is buried in nearby valleys. Hundreds of mountains in Appalachia have been destroyed by this type of industrial mining, and thousands of miles of streams impacted. Selenium, a toxic substance, has been discovered in streams fed by filled-in valleys. Once mining is done, companies “reclaim” the site by re-plating vegetation. However it is an open question whether forests, and biodiversity, will return.

A recent study found that the overall hidden environmental and health costs of coal on U.S. society reached $523 billion annually—that’s $1,698 per person in the U.S. every year.

“This is not borne by the coal industry, this is borne by us, in our taxes,” Paul Epstein the study’s lead author, told Reuters at the time. “The public cost is far greater than the cost of the coal itself. The impacts of this industry go way beyond just lighting our lights.”

In addition to impacts on local communities, coal is the most carbon-intensive fuel in the world and thus a major driver of climate change.

(01/16/2012) The Atlanta-based Southern company owns the top three biggest sources of greenhouse gas emissions in the U.S. according to recent data released by the Environmental Protection Agency (EPA). Three of Southern’s coal-fired plants—two in Georgia and one in Alabama—account for around 64.74 million metric tons of total greenhouse gas emissions, higher than all of Finland’s carbon emission in 2008.

(12/14/2011) While pro-life activists usually target abortion, a new campaign is working to broaden the pro-life message. A $250,000 media campaign in the U.S., including TV spots and radio ads in eight states, hopes to pressure conservative senators to protect unborn children by supporting the Environmental Protection Agency’s (EPA) regulations on mercury emissions from coal-fired plants.