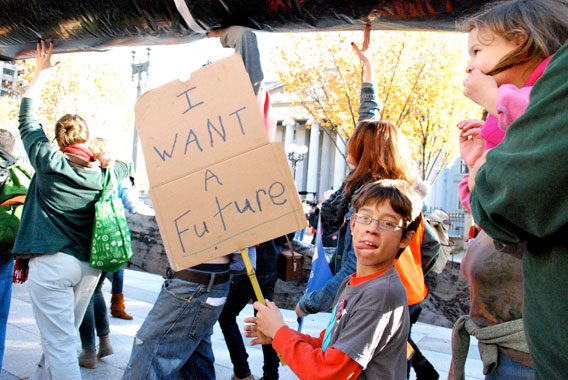 Around 12,000 protestors, including children, encircled the White House in November. A new report by Media Matters finds that the U.S. media largely ignored these protestors and their message. Photo by: Amy Dewan.

A new report by Media Matters finds that U.S. TV and print media were largely biased toward the construction of TransCanada’s Keystone XL Pipeline, which the Obama administration recently turned down. The report finds that guests and quotes were largely in favor of the pipeline in addition to news outlets consistently repeating job figures for the pipeline that have been discredited.

According to Media Matters, 79 percent of guests or quotes on broadcast news favored the pipeline, while 14 percent did not. NBC and ABC did not air any opposition voices. Cable coverage was skewed by 59 percent favoring the pipeline with 25 percent not in favor. In print it was 45 percent for the pipeline versus, 31 percent opposed.

Environmental concerns received mostly cursory mention and the impact of the tar sands industry on climate change was barely mentioned (10 percent of cable coverage and 7 percent of broadcast news) even though that was the driving force behind many of the large-scale protests that occurred in the fall. These protests—which involved 1,253 people arrested in civil disobedience acts against the pipeline in August and 12,000 people surrounding the White House in November—were also little-mentioned in U.S. media.

Furthermore, many news outlets inflated job figures based on what experts say is erroneous information from TransCanada. The State Department has estimated that between 5,000-6,000 jobs would be created by the pipeline, but the vast majority of these would be temporary.

The $7 billion Keystone XL pipeline would have carried tar sands oil 1,700 miles from Canada through six U.S. states to Texas, crossing one of the U.S.’s most important freshwater sources, the Ogallala Aquifer. Reasons against the Keystone pipeline were many and varied, from oil spill impacts to indigenous issues. But for most activists, the largest issue was climate change as oil from the tar sands emits more carbon than conventional sources. Climatologist, James Hansen, has stated that if the full-extent of the tar sands are exploited along with the world’s coal reserves “it is essentially game over” for the climate.

Even as the Obama Administration has scrapped the project, it is leaving the door open for TransCanada to reapply with a different route. In the meantime, U.S. Republicans are working on legislation to push the Federal Energy Regulatory Commission (FERC) to grant a permit for the pipeline within 30 days. Politico reported today that TransCanada spent $1.33 million on lobbying last year.

(11/07/2011) One year to the day before the 2012 US election, up to 12,000 activists encircled the White House to protest the Keystone XL pipeline, a proposed 1,700 mile pipeline that would carry oil from Canada’s infamous tar sands to the US and other foreign markets. Critics of the TransCanada pipeline have warned of potential spills in America’s heartland as well as the climate impacts of allowing more tar sands oil, which has a higher carbon footprint than conventional sources, into the US and other markets. The issue has galvanized climate and environmental activists in the US with the massive rally on Sunday preceded by civil disobedience actions in late summer that lead to the arrests of 1,253 people.

(10/11/2011) Climate and environmental activism in the US received a shot of enthusiasm this summer when it focused unwaveringly on the Keystone XL Pipeline. During a two week protest in front of the White House, 1,253 activists—from young students to elder scientists, from religious leaders to indigenous people—embraced civil disobedience for their cause and got themselves arrested. Jamie Henn, spokesperson with Tar Sands Action, which organized the protests, and co-founder of climate organization 350.org, told mongabay.com that,”the reason the Keystone XL pipeline has emerged as such a key fight is because it is on a specific time horizon, the Administration says it will issue a decision by the end of this year, and the decision whether or not to grant the permit rests solely on President Obama’s desk. This is a clear test for the President.”