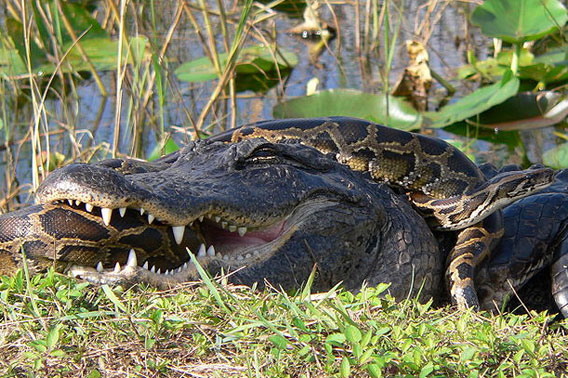 The Everglades in southern Florida has faced myriad environmental impacts from draining for sprawl to the construction of canals, but even as the U.S. government moves slowly on an ambitious plan to restore the massive wetlands a new threat is growing: big snakes from Southeast Asia.

A new paper in the Proceedings of the National Academy of Sciences (PNAS) has found evidence of a massive collapse in the native mammal population following the invasion of Burmese pythons (Python molurus bivittatus) in the ecosystem. The research comes just after the U.S. federal government announced an import ban on the Burmese python and three other big snakes in an effort to safeguard wildlife in the Everglades. However, the PNAS study finds that a lot of damage has already been done.

“Burmese pythons […] are established across thousands of square kilometers in southern Florida, including all of Everglades National Park,” the authors write, noting that the on average 12 foot (3.6 meters) long snakes have been documented preying on 40 species in the area to date, including the Key Largo woodrat (Neotoma floridana smalli), listed as Endangered by the IUCN Red List, and the American alligator (Alligator mississippiensis), listed as Vulnerable. Even the Florida panther could be in danger from Burmese pythons, since the pythons have been documented preying on leopards in their native habitat. The snakes likely ended up in the Everglades after being dumped by pet owners who didn’t know what to do with such a large animal.

To estimate the extent of damage done by these invasive snakes researchers surveyed mammals (both alive and dead) along roads in the Everglades National Park. Comparing their findings with similar surveys in the 1990s, researchers recorded that bobcat (Lynx rufus) sightings were down by 87.5 percent, white-tailed deer (Odocoileus virginianus) down by 94.1 percent, Virginia opossums (Didelphis virginiana) 98.9 percent, raccoons (Procyon lotor) by 98.9 percent, and rabbits were gone altogether even though they were among the most commonly sighted in the 1990s. Fox (Vulpes vulpes) had also vanished entirely, although the species has not yet been documented as a victim of pythons. Mammal sightings were also more frequent in areas where Burmese pythons had only recently infiltrated versus areas where the pythons had built a stronghold.

The authors write that “numerous lines of evidence implicate introduced Burmese pythons as the primary cause” in the mammals’ decline, including the timing of the decline, the fact that the decline was less pronounced in areas of recent python invasion, and that the victim species are likely innocent of the danger presented by pythons; according to fossil findings, it has been 16 million years since a snake the size of a Burmese python inhabited the region.

“Numerous published accounts and anecdotal observations by Everglades National Park personnel and others lend further support that dramatic
declines in mammal populations have occurred in Everglades National Park since the proliferation of pythons,” the authors write noting that raccoons were once common enough to be considered nuisance animals, but today raccoons are only found in coastal areas. Marsh rabbits, also once superabundant, have not been seen in the park’s core area recently.

The advance of the pythons is likely shifting the Everglades entire food chain. The researchers found slightly more rodents during their surveys, speculating that the pythons have actually boosted rodent populations momentarily due to less overall pressure from other predators. They also theorize that bobcats and fox may be vanishing in part due to a decline in prey like rabbits.

“Giant snakes, acting as generalist apex predators, can exert significant top-down pressure on vertebrate populations, even in a complex ecosystem with an exceedingly wide array of available prey species,” the study concludes.

In a bid to garner some control over the invasive snake situation in the Everglades, the U.S. government recently banned the importation and sale across state lines of the Burmese python, the yellow anaconda (Eunectes notaeus), and two subspecies of the African python (Python sebae), all popular pet species. They are mulling banning three more species.

“It does us no good to put in these billion dollars of investment in the Everglades only to have these giant invasive constrictor snakes come in here and undo the good that we are doing,” Interior Secretary Ken Salazar said on announcing the ban. Florida and the U.S. government have spent billions to date in restoration efforts for the Everglades, however progress has been slowed by politics and special interests.

(03/28/2011) An African land snail Limicolaria flammea has been discovered by researchers in six locations in Singapore, perhaps heralding a new invasion of alien land snails in Southeast Asia. Although snails may seem largely innocuous creatures, past invasions have resulted in agricultural and economic damage. The global invasion of the giant African land snail (Achatina fulica) has been called one of the world’s top 100 worst alien species. Writing in mongabay.com’s open access journal Tropical Conservation Science, researchers examine the issue and provide suggestions as to how Singapore authorities can quickly rid the nation of Limicolaria flammea.