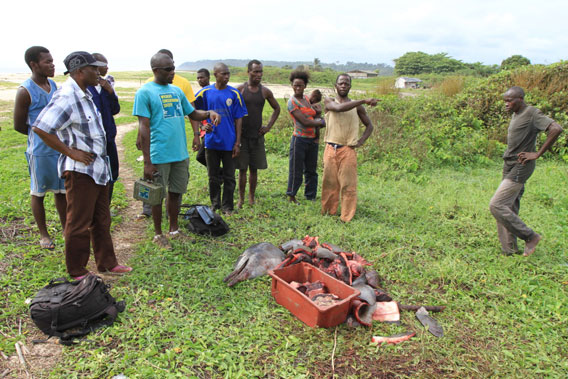 Local fishers in Brazzaville in the Republic of Congo with a butchered Atlantic humpback dolphin, a West African endemic that has been extirpated from much of its range as fisheries decline and people shift to other sources of protein. Photo by: Tim Collins.

Threats to marine mammals usually include climate change, drowning as by-catch, pollution, depletion of prey, but what about eating marine mammals? A new study in Biological Conservation finds that a surprising 87 marine mammals—including polar bears, small whales, and dolphins—have been eaten as food since 1990 in at least 114 countries.

“International regulatory bodies exist to gauge the status of whale populations and regulate the hunting of these giants,” said lead author Martin D. Robards of the Wildlife Conservation Society (WCS). “These species, however, represent only a fraction of the world’s diversity of marine mammals, many of which are being accidentally netted, trapped, and—in some instances—directly hunted without any means of tracking as to whether these off-takes are sustainable.”

Scouring through 900 sources over three years, researchers only counted data that included the consumption of marine mammals by humans and not killing (accidental or otherwise) for other purposes such as bait or medicine. Those marine mammals that have ended up on a plate include the pygmy beaked whale (Mesoplodon peruvianus), listed as Data Deficient on the IUCN Red List; the Ganges river dolphin (Platanista gangetica), Endangered; the narwhal (Monodon monoceros), Near Threatened; Chilean dolphin (Cephalorhynchus eutropia), Near Threatened; long-finned pilot whale (Globicephala melas), Data Deficient; Burmeister’s porpoise (Phocoena spinipinnis), Data Deficient; California sea lion (Zalophus californianus); Baikal seal (Pusa sibirica); the polar bear (Ursus maritimus), Vulnerable; dugong (Dugong dugon), Vulnerable; and all three species of manatee, each listed as Vulnerable among many others.

Small cetaceans—whales, dolphins, and porpoises—are especially at risk according to the study.

“Our review highlights an escalation in utilization of small cetaceans caught in conjunction with fishing activities since 1970, a form of fishing-up-the-food-chain,” the authors write. “Where consumption relates to food security and poverty, we found evidence of deliberate killing of animals
caught both deliberately and accidentally in fishing gear.”

There is an “immediate need is to understand the motivations behind the consumption of marine mammals and use these insights to develop solutions to protect these iconic species that lead to more effective management and conservation,” said Howard Rosenbaum, Director of WCS’s Ocean Giants Program.

The largest consumers of marine mammals was Japan, followed by a number of Arctic nations where hunting and eating marine mammals is apart of indigenous culture.

A species of special concern is the Atlantic humpback dolphin (Sousa teuszi), which researchers have discovered is being widely eaten in the Republic of the Congo.

“The Atlantic humpback dolphin may well be the rarest mammal in the Congo basin region,” said Tim Collins. “Unfortunately, few have ever heard of it, least of all the fisherman eating them out of existence.” 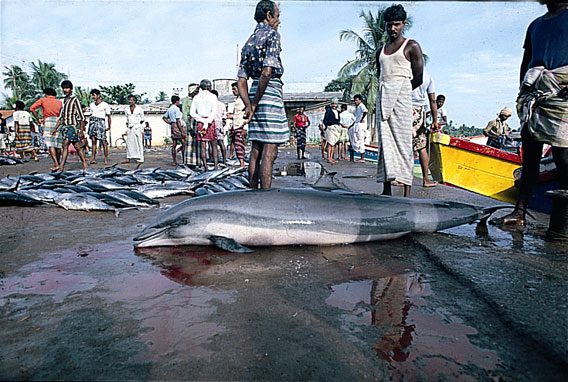 Obscure species such as Fraser’s dolphin (seen here in a fishing market in Sri Lanka) are being increasingly utilized as food in areas impacted by food insecurity and/or poverty. Photo by: Anouk Ilangakoon.

(01/08/2012) To date three Hawaiian monk seals (Monachus schauinslandi), and possibly a fourth mortality under investigation, have been found bludgeoned to death by an as yet undiscovered assailant, reports the Associated Press. Authorities believe the seals may have been killed by local fishermen who fear new regulations meant to save the species from extinction. The seal is currently down to 1,100 individuals.