by Robin Oisín Llewellyn on 6 December 2011 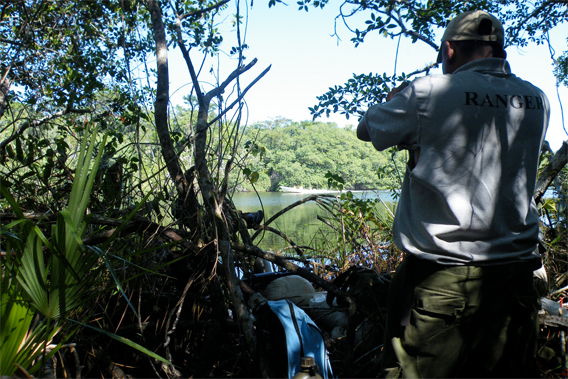 In the Belizean rainforest two rangers look up and down a straight path hacked through the jungle and take GPS coordinates, the escorting soldiers lying back in the heat as the coordinates are delivered. These are noted and the patrol resumes, pausing to photograph protected comfra palms that have been cut and laid on the muddy ground, or stretches where the rainforest has been cleared far beyond the permitted width.

We are in the Sarstoon-Temash National Park, nearly 42,000 acres of rainforest and red mangrove swamps in southern Belize adjacent to the Guatemalan border, and the park rangers are dealing with a new threat to the biodiversity of the reserve. Rather than searching for illegal loggers from Guatemala, this patrol is monitoring the activities of an American oil company.

These are seismic lines, cut on the orders of US Capital Energy, and the normally silent Temash and Sarstoon rivers are buzzing with river traffic as their workers are transported to cut new lines. The comfra palms are protected as their fruit provide food for the large, cow-like peccary, but they, in their herds of 50-60, have deserted the area since the oil company commenced its explorations.

We trek through the jungle for several hours, crossing the only known low-lying sphagnum moss bog in Central America, before arriving at our rendezvous on the Temash River. The seismic lines are cut clear to the river’s edge – this is another infringement of the regulations which mandated leaving a ‘buffer’ of rainforest, but makes our departure far easier – the mangroves abutting the river present a major barrier to those seeking to enter or leave the rainforest, particularly those in possession of illegal rosewood.

Making the dense, frequently impassable jungle into a network of straight paths with access to the rivers poses a danger that has already been borne out on the lines where cutting work has been completed and which now lie silent; the previous patrol discovered new trails branching off these seismic lines to newly felled hardwood stumps. Many lines lead directly to the Guatemalan border – the home of the many armed gangs who enter the park to poach resources, and equipped as they are with radios, can now escape more easily from the Belizean authorities.

The national park has been recognized as an internationally significant wetland under the Ramsar Convention and lies on the ancestral lands of the Mayan and Garifuna communities. These communities initially opposed the imposition of the national park in 1994 but then gained a say in its management through establishing the Sarstoon-Temash Institute for Indigenous Management (SATIIM), the community NGO that now operates the patrols.

Belize’s accession to the Ramsar Convention, the UN Convention on Biological Diversity, and the UN Declaration on the Rights of Indigenous Peoples, has not stopped the debt-ridden national government from granting an exploration contract to US Capital Energy, despite the fact that oil extraction itself is banned in national parks, and that a 2010 Belize Supreme Court ruling prohibited the government from issuing drilling concessions on land claimed by indigenous communities. The government has appealed that ruling, and Prime Minister Dean Barrow (who ironically served as SATIIM’s lead counsel in a 2006 court case challenging the legality of seismic testing in the park) said in February this year: “US Capital energy …is no more than 6 to 9 months away from actually beginning to drill. And certainly when they reach that point drill they will and hopefully we can find some more oil that will help us to begin to meet with some degree of ease these super bond payments that are such a Damocles sword.”

The ‘super bond’ is a renegotiated system of debt repayment that is having a crushing effect on the nation’s finances, but the history of the only commercial oil field in Belize suggests that the benefits to the treasury may be minimal.

Back on the Temash we board our boat and move downriver. The river winds spectacularly, causing stretches to be buried in the deepest shade or bathed in sunlight. The sunnier banks are populated by colonies of iguanas, and crocodiles are usually seen at the water’s edge although these are strangely absent. Their numbers were only just recovering from having been nearly wiped out by poachers prior to the declaration of the national park.

For US Capital Energy to move from oil exploration to oil extraction, the government would need to remove the national park status of Sarstoon-Temash, an action that in itself would have a knock-on effect on the area’s biodiversity.

For the indigenous communities that traditionally fish on the rivers of the park, the consequences of cheap, fast oil extraction through folds of limestone could be terrifying. Outside of the rainy season the Sarstoon and Temash rivers flow slowly to their mouths by one of largest reefs in the world. The seepage of oil would cause widespread damage, but the cutting of seismic trails (itself of disputed legality) is already damaging the biodiversity of the park and directly enabling the illegal clearing of rosewood and other trees from the rainforest.

Robin Llewellyn is a freelance journalist writing about human rights and environmental issues.