A forest elephant in Gabon. Photo by: Rhett A. Butler .

“Having protected areas is not enough to save elephants in times of conflict,” says lead author Rene Beyers, a postdoctoral fellow at UBC’s Department of Zoology. “The war in the Democratic Republic of Congo had a large impact on elephant populations, including those in parks and reserves.”

The study found that forest elephant faced the steepest declines on the park’s edges and in areas where human infiltrated, and “after the war, elephant densities were relatively higher in the center of the park where they were better protected, suggesting that this area may have acted as a refuge,” the authors write.

Even though the civil was has passed, conflict persists in some places. In addition, forest elephants are still targeted for the black market ivory trade and bushmeat.

“We’ve found that two factors in conservation efforts were particularly effective: a continued presence by a highly committed government field staff and continued support by international organizations—such as the Wildlife Conservation Society, Gilman International Conservation and UNESCO—made a difference for their survival,” explains Beyers. The authors estimate that forest elephant populations in eastern Congo have fallen from 22,000 prior to the civil war in the mid-90s to around just 6,000 today.

“The divergence of the two species took place around the time of the divergence of the Asian elephant and woolly mammoths. The split between African savanna and forest elephants is almost as old as the split between humans and chimpanzees. This result amazed us all,” co-author Michi Hofreiter, who specializes in the study of ancient DNA in the Department of Biology at York, said at the time.

Forest elephants are generally smaller than their savannah cousins, and possess straighter tusks. Research has found that these species are vital seed dispersers for the forests of the Congo, playing an ecological role in the forest that no other species may be able to fill. 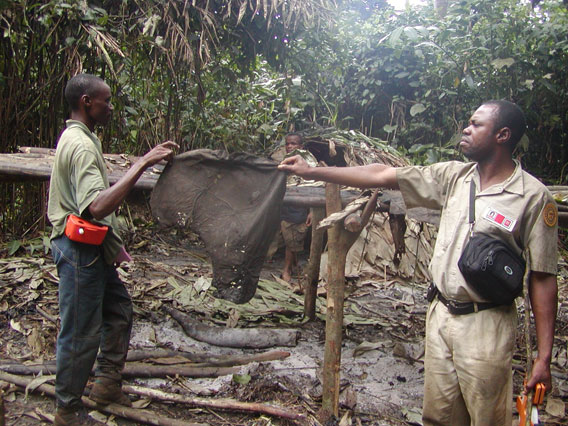 A wildlife inventory team came across this elephant poachers’ camp in the forest where an ear of elephant was left on a drying rack. Photo by: John Hart.

(06/27/2011) Bushmeat is one of the major threats to wildlife in parts of Africa: large and medium-sized animals are vanishing from regions in a trend dubbed by biologists the ’empty forest syndrome’. A number of popularly consumed species are also threatened with global extinction. A new study in mongabay.com’s open access journal Tropical Conservation Science surveyed 1,050 households in Brazzaville, the capital of Republic of the Congo, regarding their consumption of bushmeat only to find that the practice was practically universal: 88.3 percent of households in Brazzaville consumed bushmeat.