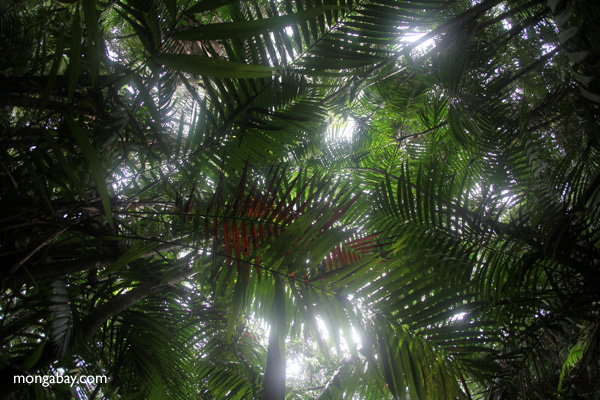 Rainforest in the Panama Canal Zone. Photo by Rhett A. Butler.

As demonstrated by growing enthusiasm for conserving forests and the rise of the Reducing Emissions from Deforestation and Degradation (REDD+) program, the public is increasingly aware of the role forests play in delivering ecosystems services — like clean air and water — that benefit mankind. Yet, science still lags conventional wisdom — researchers have yet to fully quantify much of what healthy forests provide. Bridging this gap is key to unlocking the full value of protecting and restoring tropical forests.

An ambitious initiative in Panama is attempting to do just that. The Agua Salud Project is a joint effort between the Smithsonian Tropical Research Institute (STRI), the Panama Canal Authority, Panama’s National Environmental Authority, and the HSBC Climate Partnership. The effort aims to “understand and quantify” the ecological, social, and economic services provided by forests in the watershed of the Panama Canal, the economic lifeblood of Panama. The significance of the research is amplified by the importance of forests in the functioning of the canal, which requires vast quantities of freshwater to power its system of locks. Erosion — worsened in deforested areas — is a substantial cost for the canal.

Authorities now understand the risks to the canal posed by deforestation and have banned forest clearing in much of the canal’s watershed. Yet as forests are restored, there remains a lack of information on what types of vegetation are best at reducing erosion and maintaining water flows. Agua Salud is now helping inform them.

STRI researchers are working to quantify the effects of different land use on water flows and erosion as well as carbon storage and biodiversity. At the same time, they are also looking at the economics values.

A special issue of the journal Forest Ecology and Management provides a glimpse at some of the findings, which are based on 20 years of research to date.

“Twenty years ago, we had almost no information about how to build a forest,” said Jefferson Hall, a STRI staff scientist who was lead editor of the issue. “People either planted one of four non-native species—teak, pine, eucalyptus or acacia—or they used a trial-and-error process with other species that was not always successful. Now we can be smart about which trees we plant at a given site, and we understand much more about what motivates land owners and rural farmers to put this know-how to work.”

Papers in the issue found while teak plantations may store a similar amount of carbon in their vegetation as regrowing native forest after 20 years, they store less soil carbon and house fewer wildlife species. Other papers highlighted the economic benefits of using native species for reforestation projects. Native species are well-adapted to local conditions and have established values in local markets.

Yet the trees that grow best depend greatly on specific conditions, including the history of prior land use.

“The differences in growth between adjacent areas can be quite significant,” said Michiel van Breugel, a STRI scientist who co-authored several of the papers as he pointed to a stand of trees that was several meters high. “These two tracts of trees were planted as the same time yet the ones on that ridge are like shrubs, whereas this block is like a forest.”

“These differences have substantial implications for carbon storage,” added Daniela Weber, a STRI researcher who is the Project Manager for Agua Salud.

Van Breugel said the scale of Agua Salud — some 700 hectares (1730 acres) across forest types — is providing data that will help with landscape-scale estimates.

The early results from the research come at an opportune time: Panama is laying the groundwork for its REDD+ program, which would generate funds for forest conservation and restoration based on the carbon values of its forests. But beyond REDD+, Panama has other economic considerations: notably the Panama canal, which generates more than two billion dollars a year in tolls. Any threats to the viability of the canal have to be taken very seriously. Last December, flooding closed the Panama canal for the first time since 1935. Flooding also deprived a million Panamanians of drinking water for nearly a month.

“Among carbon storage and other services, forests reduce landslides and sedimentation and can serve as a sort of sponge – storing wet season water in their soils for release in the dry season, and can modulate peak stream flows during storms,” said van Breugel.

“There is no question that forests play an important role in Panama’s economy,” he added, noting that watershed forests have become an important destination for ecotourists and birdwatchers. “But it also works works the other way around.”

“For me the canal is one of the clearest examples of how perceived ecosystem services of forests – in this case directly linked to very big economic interests – have resulted in forest conservation. Satellite images of central Panama provide for a very strong visual illustration of this: a clearly visible strip of forests at both sides of the canal, with the remainder of central Panama much more deforested. Without the canal, these forests wouldn’t be there anymore.”