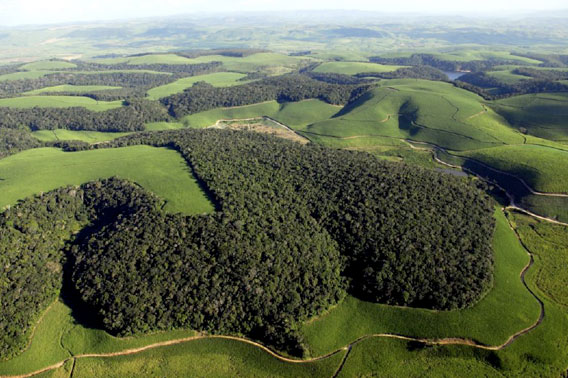 A typical scenario in the Atlantic Forest at the Northeastern Biodiversity Corridor, where forest remants are surrounded by sugarcane plantations. Most of the remaining forest fragments are, on average, smaller than 100 ha. Photo credit: Adriano Gambarini.

Aggressively expanding sugarcane ethanol is putting Brazil’s nearly-vanished Atlantic Forest at risk, according to an opinion piece in mongabay.com’s open-access journal Tropical Conservation Science. Already down to less than 12 percent of its original extent, the Atlantic Forest—home to over 7,000 species that survive no-where else—is facing a new peril from ethanol, used as an alternative to gasoline and often touted as ‘green’ or ‘environmentally-sustainable’.

“In fact, the signals of expansion in the demand for sugarcane in Brazil have become real and evident […] The price of sugar recently reached the highest value in the past 30 years in the international market. USA, the world’s largest oil consumer, has the goal of using at least 45 Bl of renewable fuel per year, and of increasing to 136 Bl until 2022 . In February 2010, the US Environmental Agency declared that the Brazilian ethanol is an ‘advanced biofuel’, opening the possibility of increasing imports by the American market. The European Union has also classified Brazilian ethanol as ‘sustainable’,” the authors write.

Sugarcane crops for ethanol is especially expanding in the northwestern portion of the Atlantic Forest, including the states of Alagoas, Pernambuco, Paraíba and Rio Grande do Norte, according to the piece. Here, less than 1 percent of the forest is legally protected and much of it survives in forest fragments smaller than 100 hectares. The authors note that “as a consequence, several endemic species of the region are on the verge of going globally extinct, making conservation efforts in this region urgent.”

The authors contend, however, that the region doesn’t have to choose between mass extinction and increasing sugarcane ethanol production: “instead of expanding plantations, increasing crop productivity should be the more logical and environment-friendly solution for that region. […] The current challenge is to increase the number of sugar and ethanol companies following best management practices and to turn these programs into a real opportunity to restore the biodiversity and environmental services of an ecosystems in eminent collapse.”

The paper lays out several recommendations including a moratorium on clearing forests for sugarcane while critical biodiversity areas are identified; increasing ethanol productivity through better machinery and techniques; press sugarcane companies to publicly commit to best management practices; and pushing for second generation ethanol.

“The local sugarcane industry, which for centuries moved the economy of the region, needs more than ever to understand that it is necessary to adapt to the new environmental practices and to become a partner of the society in the conservation of the natural capital: biodiversity,” the authors conclude.

(07/01/2010) A group of Brazilian legislatures, known as the ‘ruralistas’, are working to change important aspects of the Brazil’s landmark 1965 forestry code, undermining forest protection in the Amazon and the Mata Atlantica (also known as the Atlantic Forest) and perhaps heralding a new era of booming deforestation. The ruralistas, linked to big agribusiness and landowners, are taking aim at the part of the forestry code that requires landowners in the Amazon to retain 80 percent of their land area as legal reserves, arguing that the law threatens agricultural development.