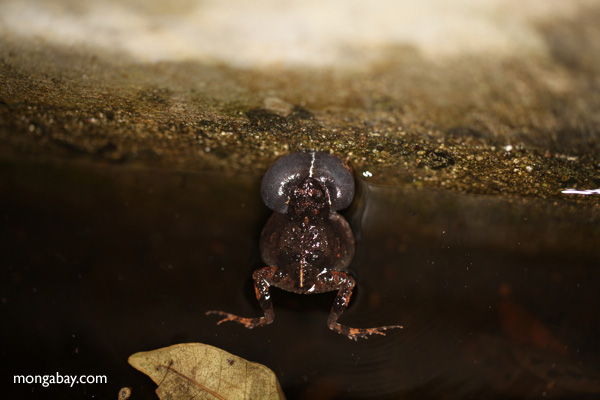 Tungara frog singing in Panama. Photo by: Rhett A. Butler.

New understanding of how female tungara frogs sort out the din of multiple males singing may lead to insights into human hearing, according to a new study in Nature Communications.

“An important component of successful communication is being able to tell which sender among many is sending the signal,” explains neuroscientist Hamilton Farris with Louisiana State University (LSU) in a press release. “In auditory neuroscience it’s called the ‘cocktail party problem.'”

Female tungara frogs have to deal with cocktail party of their own, only this party is all male. Male tungaras produce complex songs to lure females, but make life difficult for females by overlapping songs. Females have to overcome the noise if they are to select a mate. The study found that females sort out males’ song much in the same way as humans determine a single voice from a din: they group together sounds that are most similar.

“Thus, in noisy, complicated environments, the cognitive solution is not based on absolute stimulus rules, but one which compares all the sounds and then deduces their sources,” concludes Farris. “Based on our research, we now have a better understanding of how the acoustic cues are used to solve the problem, an understanding that will guide research advances to solve communication problems associated with hearing deficits and disorders of attention.”

This is not the only contribution tungara frogs have brought to human society. A study last year found that components of tungara frogs’ foam nests could be used to produce biofuels.

Tungara frogs (Engystomops pustulosus) are found throughout Central America and in Venezuela and Colombia. They are listed as Least Concern by the IUCN Red List and the population is believed to be stable.

(05/31/2011) Frog populations worldwide are facing two apocalypses: habitat destruction and a lethal plague, known as chytridiomycosis. Over 30 percent of the world’s amphibians are currently threatened with extinction and it is thought at least 120 species have gone extinct in just the last 30 years. Unfortunately, a new study in Proceedings of the National Academy of Sciences (PNAS) finds that the two threats—habitat loss and chytridiomycosis—are likely to leave no frog population undisturbed. According to the study, frogs that live in still-pristine habitats are more susceptible to chytridiomycosis than those that are already suffering from habitat loss.

(05/18/2011) Remote little-explored rainforests probably harbor the majority of undiscovered amphibians and land mammals according to a new study in Proceedings of the Royal Society B. The study calculated that it’s likely 33% of the world’s amphibians and 3% of terrestrial mammals still remain unknown. However, the paper also found that these undiscovered species are likely in worse peril of extinction than already-described species.