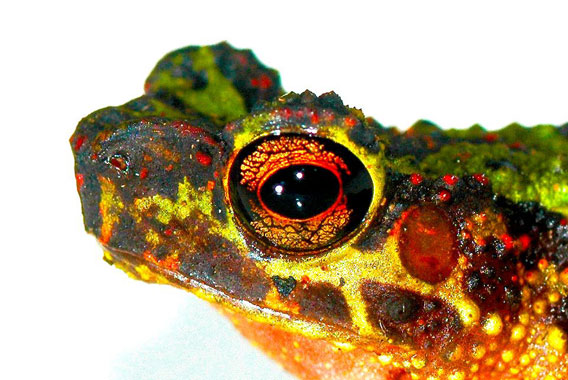 Scientists are elated after the surprise rediscovery of a wildly-colored frog not seen for 87 years and never before photographed—until now. The Bornean rainbow toad, also known as the Sambas Stream toad (Ansonia latidisca) was rediscovered on Borneo in the Malaysian state of Sarawak by local scientists inspired by a 2010 search for the world’s missing amphibians by Conservation International (CI). Leading up to its search CI released the World’s Top 10 Most Wanted Lost Frogs (out of a hundred being searched for): the Bornean rainbow toad was listed as number 10.

Led by Dr. Indraneil Das with Universiti Malaysia Sarawak (UNIMAS), who last years discovered a pea-sized frog in Borneo, researchers found the long-elusive Bornean rainbow toad hanging out 2 meters up a tree. The species was found at night in a little-explored area of the Gunung Penrissen mountain range. Several early expeditions failed, but once the group included higher altitudes they were actually able to locate three individuals of the long-lost toad.

Prior to its rediscovery the toad was only known from three individuals and a single black-and-white illustration made in the 1920s.

“When I saw an email with the subject ‘Ansonia latidisca found’ pop into my inbox I could barely believe my eyes. Attached was an image—proof in the form of the first ever photograph of the colorful and gangly tree-dwelling toad. The species was transformed in my mind from a black and white illustration to a living, colorful creature,” amphibian specialist Dr. Robin Moore of Conservation International, who launched the global search for lost amphibians, said in a press release.

Unfortunately the habitat in which it is found it not currently under protection and is threatened by forest fragmentation, poaching, and resort development. Dr. Das told The New York Times that the area is currently accessible due to the construction of a resort, including an 18-hole golf course. The expedition was especially expensive because researchers had little choice in this remote area but to shell out for the resort.

The exact location of the rediscovery of the frog is being withheld given concerns it would become targeted for the pet trade, especially with its bright and unique coloring.

CI’s Global Search for Lost Amphibians covered five continents and 21 countries looking for 100 amphibians, many not seen for decades. The official search only found four of the lost hundred, an additional sign that many of the world’s amphibians are simply lost for good.

Amphibians are undergoing an extinction crisis unparalleled to date in the animal world. Currently the IUCN Red List estimates that 41 percent of the world’s amphibians are threatened with extinction. Frogs, salamanders, and worm-like caecilians have been battered worldwide by habitat loss, pollution, agricultural chemicals, overexploitation, and climate change. Yet the biggest impact on amphibians appears to be a fungal disease called chytridiomycosis. This amphibian-plague has wiped out whole species even in otherwise areas. Experts say that in the past 3 decades it is likely at least 120 amphibians have gone extinct. In a few cases captive populations in zoos have become a species’ last stand. However, this rediscovery of the Bornean rainbow toad highlights that there is still hope for some of the world’s amphibians.

“Thrilling discoveries like this beautiful toad, and the critical importance of amphibians to healthy ecosystems, are what fuel us to keep searching for lost species,” Dr. Das said in a press release. “They remind us that nature still holds precious secrets that we are still uncovering, which is why targeted protection and conservation is so important. Amphibians are indicators of environmental health, with direct implications for human health. Their benefits to people should not be underestimated.”

Of course, rediscovering the Bornean rainbow toad is only the start. Now conservation measure are needed to protect it from vanishing again. 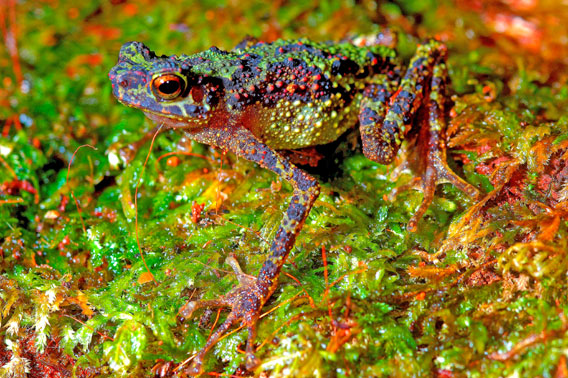 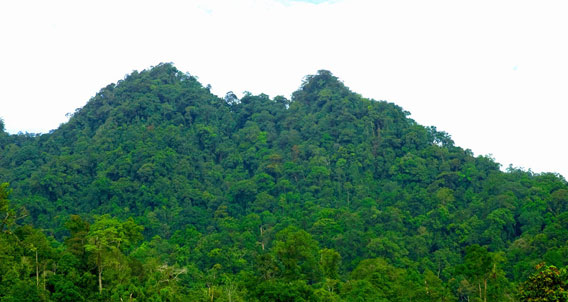 (02/17/2011) The Search for Lost Frogs, a global expedition to uncover amphibian species not seen for decades, has uncovered one of the expedition’s most sought-after species: the Pescado stubfoot toad (Atelopus balios). The discovery in Ecuador was one bright spot in a search that revealed more about the crisis and extinctions of frogs than it did about the hopefulness of finding cryptic communities. In total the expedition rediscovered 4 of its 100 targeted species.

(09/22/2010) A search for 100 of the world’s ‘lost amphibians’—unseen for decades and in many cases supposed extinct—have turned up three species so far, one of which hasn’t been recorded since the Nazis were bombing London. The lost amphibian expeditions, formed by Conservation International (CI) and the IUCN Amphibian Specialist Group (ASG), have found surviving populations of the cave splayfoot salamander (Chiropterotriton Mosaueri) in Mexico, the Mount Nimba reed frog (Hyperolius Nimbae) in the Ivory Coast, and the Omaniundu reed frog (Hyperolius sankuruensis) from the Democratic Republic of Congo.