The truth about polar bears and climate change 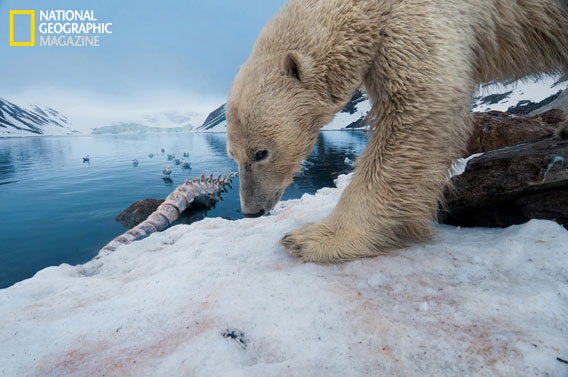 Although scientists say innumerable species are threatened by climate change, polar bears have been the global symbol of the movement to rein-in greenhouse gas emissions. This is perhaps not surprising, since polar bears are well known to the public—even though they inhabit a region largely absent of humans—and they make a big impression. Their glaringly white coat contrasts with their deadly skills: as the world’s biggest terrestrial predators, they are capable of killing a seal with single blow. When young they are ridiculously adorable, but when adults they are stunning behemoths. But that’s not all. Unlike many other species, the perils of climate change are also easy to visualize in connection with polar bears: their habitat is literally melting away.

But what is the science behind their symbolism as climate change victims? In the most recent issue of National Geographic, Susan McGrath, tackles this question with the help of some of the world’s top polar bear experts. Mongabay.com interviewed her about her article.

Mongabay: Polar bears have become a symbol of global climate change. How does your article compliment/differ from other coverage on the polar bear’s predicament?

Susan McGrath: The story benefited from tremendous input from top polar bear scientists, so it’s accurate and states the case without hyperbole. The polar bears’ predicament is so dire, really—haunting, even—that the simple facts make a compelling story.

Mongabay: Why does the shrinking sea ice threaten polar bears?

Susan McGrath: Polar bears have adapted to live their whole lives out on the sea ice, hunting seals and other prey year round. Their enormous bodies need huge quantities of energy to survive. If they eat well in winter and spring, they pack on thick layers of blubber they can live on for a few lean summer months when hunting is bad.

The richest habitat for polar bears is the thinner sea ice that lies over the continental shelf. Seals can maintain breathing holes in it, and haul out onto the ice to rest, so it makes excellent hunting grounds for bears. (Bears are strong swimmers but no match for seals in the water!)

It’s precisely this thinner ice on the margins of the polar ice that melts the fastest every year, leaving hundreds of miles of open water between the land and the thicker, multi-year ice – neither of which provide food for bears.

Mongabay: What other species are imperiled by the melting Arctic?

Susan McGrath: Scientists say that ringed seals and walruses, being equally dependent on sea ice, face the same risk of extinction that polar bears do. Also, as the Arctic waters warm, fishes and other aquatic creatures from more southern waters are moving north into the Arctic, where they compete with Arctic species. The whole Arctic foodchain may be imperiled.

Mongabay: On current emissions trajectories, how likely do you think it is that the wild polar bear will not survive the century? If they do, what would their populations look like?

Susan McGrath: The top North American polar bear scientists such as Ian Stirling, Andrew Derocher, and Steven Amstrup say it’s up to us. If the world goes about its business at the usual rate, all of the ice is likely to melt in the Arctic every summer by 2050—less than 40 years from now. Polar bears will be gone.

All hope’s not lost, though.

If we can slow the pace of change by reducing emissions, some ice will persist in parts of the Arctic and some bears may be able to hang on in those areas. If we continue to make positive changes eventually the world may cool slightly again, increasing the ice pack. Then there’s a chance polar bear populations will start to expand once more.

Mongabay: With the sea ice melt has come a number of governments and companies looking to exploit oil and gas reserves in the Arctic. How could this industrialization of the Arctic impact polar bears and other wildlife?

Susan McGrath: Industrialization of the wild causes degradation and destruction of habitat. Oil and gas exploitation means oil spills, tanker traffic, noise disturbance, human activity, and heavy machinery. The whole foodchain is affected—less algae, fewer algae eaters, fewer small fish for the big fish to eat, and so on, all the way up the chain.

When you take an animal whose habitat is melting away at a catastrophic rate, and you add any other dangers, you’re just piling on the likelihood that the animal will go extinct.

Mongabay: What’s the best way the public can save polar bears?

Susan McGrath: Polar bear are facing extinction because of human-caused climate disruption. Unless we take decisive positive steps to reverse the course of climate change, the polar bears are doomed.

So we have to work on saving energy in our own households and daily lives—drive less, turn off lights when we leave the room, switch out incandescent bulbs for compact fluorescents, unplug power cords when we’re not using them, and that sort of thing.

Maybe even more important, we need to send a strong message to our political representatives that we care about animals like polar bears and we don’t want to just let them disappear. Regardless of our personal politics, left, right, or center, we have to be good stewards. And that means taking strong steps to reduce our use of fossil fuels. 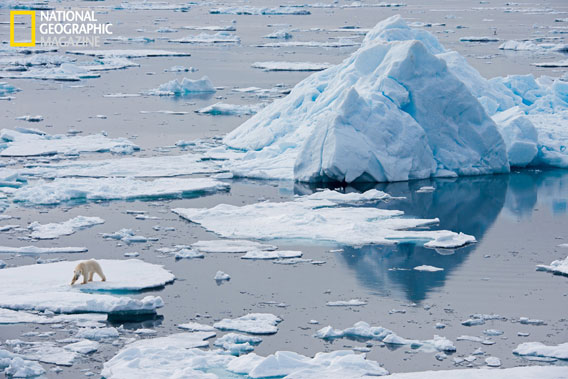 (12/17/2010) Once thought of as a doomed species, new research published in the journal Nature and conducted by scientists from several institutions, including the National Science Foundation and the U.S. Geological Survey, finds that polar bears could be saved from extinction – if certain measures are taken.

Polar bears are newcomers on the world stage

(03/01/2010) One of the most well-known animals, the polar bear, is a newcomer on the world stage, according to research published in the Proceedings of the National Academy of Sciences. By studying the DNA of an ancient polar bear jawbone uncovered in 2004 in Norway scientists have for the first time pinpointed the time when the polar bear split from its closest relative, the brown bear. “Our results confirm that the polar bear is an evolutionarily young species that split off from brown bears some 150,000 years ago and evolved extremely rapidly during the late Pleistocene, perhaps adapting to the opening of new habitats and food sources in response to climate changes just before the last interglacial period.”